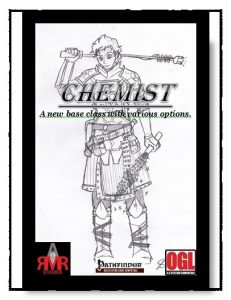 This base-class clocks in at 7 pages, 1 page front cover, 1 page editorial, 1 page SRD, 1 page back cover, leaving us with 3 pages of content, so let’s take a look!

The chemist-base class presented here receives d10 HD, 4 + Int skills per level, proficiency with simple and alchemical weapons as well as all armors and shields, excluding tower shields. The class gets full BAB-progression as well as good Fort-saves.

Unfortunately, we have a minor hiccup in the first ability of the class alchemical study, namely that they add + level, not class level, to Craft (alchemy)-checks. The class begins play with 1/day alchemical smite: This is activated as a move action and adds acid, cold, electricity or fire damage equal to the class level. The ability lasts for class level + Int-mod rounds and a weapon thus modified is treated as an alchemical weapon for master of alchemy. You get +1/day uses at 4th level and every 3 levels thereafter.

2nd level nets poison resistance, which improves by +1 every 3 levels thereafter. 3rd level and every 3 levels thereafter net you your choice of either a bonus feat (combat feat or Brew Potion, the latter not being properly capitalized) or an alchemist discovery chosen from a small selection, with most focusing on gaining mutagen/enhancing it. 4th level unlocks extracts, which proceed to scale up to 4th level, acting as basically alchemist -3 levels, akin to how ranger, pala, et al deal with delayed spellcasting.

5th level provides some serious overkill regarding math: +1/2 class level “to all saving throws allowed by his alchemical weapons or items” – or at least that’s what I think it’s supposed to do. It could also mean that the class gains this bonus to avoid damage from his own alchemical items…but ultimately, no matter how you read it, the ability is lacking in precision. 13th level nets resistance 5 to acid, cold, electricity and fire, which increases by +5 at 16th and 19th level. The aforementioned master of alchemy wold be the capstone, which doubles the threat range when using alchemical weapons and also lacks a verb somewhere. I don’t know what “their damage improved one step” is supposed to mean. Additionally, crit multiplier is increased by one and they cannot be disarmed or sundered…which is a sucky flat-out immunity. Not even gods? Seriously? When not go with a big bonus instead?

The pdf also offers a new discovery: Variable smite lets you change the smite element at the “Cost of an additional turn of his alchemical smite” – does that mean round? Or activation? No idea, opaque, next.

The pdf then concludes with 3 alchemical weapons, all of which come with nice b/w-drawings/artworks. The first would be a 1d8 touch AC-attacking palm that deals 1d8 acid damage that can be opened as a move action, lasting one minute after being opened. Chilled Scourges would do the same for cold, but open up a question: The palm is, flavorwise, a glove, which eliminates that item-slot. The scourge is not…so…why? Finally, the lightning rod would do the same…well, for electricity. Same question applies.

Editing and formatting are pretty good on a formal level. On a rules-language-level, some ambiguities have crept in, though. Layout adheres to a solid two-column b/w-standard and the b/w-artworks provided are nice. The pdf has no bookmarks, but needs none at this length.

Angel “ARMR” Miranda’s chemist is per se a decent class in theme; the full BAB-alchemy-user is a neat idea and one I most certainly can get behind as a huge fan of the witcher; that being said, it falls pretty flat. Alchemical smite, the one active class feature at low levels, sucks hard and the class, as a whole, just feels wrong; just feels like it doesn’t really get to do what it’s supposed to do. The chemist presented here isn’t that good at blowing stuff up, at adding cool effects to his weapons…at pretty much the niche chosen for it, theme-wise. It is not a bad class per se, but it certainly can use a power-upgrade, more options…you get the idea. As a whole, in spite of the fair proposition of this being PWYW, I can’t go higher than 3 stars on this fellow.

You can get this price for PWYW here on OBS!