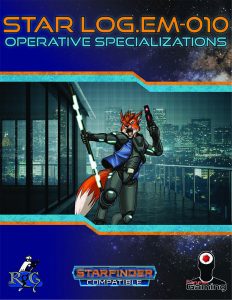 After a brief introduction, including the by now standard and enjoyable “Query”-dialogue that simulates logging onto a database, we begin with 4 new operative specializations.

Since the operative specializations make use of new exploits, we should talk about those first. 4 are provided, and they all are unlocked for the general operative public that doesn’t have the proper specializations, at 10th level. Fast poisoner lets you once per round poison a slashing/piercing melee weapon or load a poison into an injection weapon as part of the attack. Frightful trick can render the target of debilitating trick shaken instead of flat-footed or off-target. Foes immune to fear can’t be affected. Spell Steal allows you to attempt to steal a benevolent magical effect from a target via debilitating trick, using the targeted version of dispel magic (not italicized), using operative level as class level. On a success, the target gets a Will save – on a failure, you hijack the remaining duration. Cool! The exploit is btw. balanced by requiring 10 minutes of rest a Resolve Point to use it again. Finally, unconventional skill lets you choose one class skill, adding that skill to the specialization’s associated skills. Previously invested ranks in a skill chosen are refunded, and e.g. Skill Synergy et al may also be reassigned.

The first of the operative specializations is Crackerjacks may choose two skills from the operative’s class skills or have been added via racial traits of theme powers. These skills may be used to make a trick attack, and if the chosen skill is not Dexterity-based, you get +4 on the skill check to do so. The exploit would be unconventional skill and the specialization’s 11th level ability lets you choose a skill for which you have less than half total character level ranks at the start of the day. When you make a skill check with that skill, you are treated as though you had +1/2 character level ranks invested, up to the usual maximum. This does allow you explicitly to use previously untrained skills with the +3 for being trained, and the skill thus chosen may be reassigned “rest, by taking a 10-minute rest to regain Stamina Points and spending 1 Resolve Points instead of the usual 1 Resolve Point “ – while it’s pretty clear what’s meant here, this is a bit confusing. This should probably read “and spending an additional Resolve Point…” Alternatively, you may reassign the skill as a move action by spending 5 Resolve. I really like this, as it rewards NOT specializing and min-maxing core competence skills.

The second specialization is poisoner, which has Medicine and Sleight of Hand as associated skills. When making a trick attack with Medicine with a weapon with an injection weapon that deals slashing or piercing damage, loaded with poison, you get +4 to the check, unless the target is immune to poison. The exploit is fast poisoner. At 11th level, we get the trick poisoner ability, which lets you increase the save DC of poisons used with debilitating trick, and additionally, you can make lethal poisons stop one step before death. The scaremonger would be the fear specialist, with Bluff and Intimidate as associated skills, and +4 to Bluff and Intimidate checks to make trick attacks if the target isn’t immune versus mind-affecting effects. 11th level basically combines frightful trick’s benefits with the standard benefits of trick attacks, allowing you to add shaken to one of the standard conditions, rather than to replace it.

Finally, spellstealer gets Mysticism and Sleight of Hand as associated skills. When using Mysticism for trick attacks, you get +4 and treat it as magic for purpose of overcoming DR and affecting incorporeal critters. The exploit gained would be Spell steal, obviously. 11th level is cool_ If you hit with debilitating trick, you cause the target to lose a spell slot of 3rd level or lower, higher level slots first, with every three levels thereafter increasing the maximum spell slot level affected.

The pdf concludes with a brief series of notes on operatives in the Xa-Osoro system. Nice.

Alexander Augunas’ operative specializations present classics regarding the themes they cover, but this does not mean that the design-work here was simple. Spell theft is a notorious tough one, and the crackerjack’s take on a rewarding dilettante with eclectic interests also managed to walk that precise line, that makes it worthwhile, without being OP. In short, this is, in spite of the hiccup noted, represents a very much worthwhile supplement. My final verdict will hence clock in at 4.5 stars, and considering the degree of complexity and difficulty of the material presented, I will round up.

You can get these cool operative tricks here on OBS!