Call you a Fool: Short Adventures inspired by Classic Rock 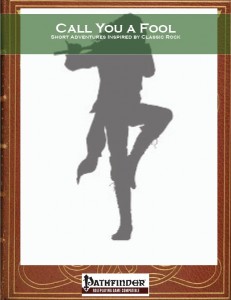 This pdf kicks into gear with a note on CRs – and the reason for their absence in this book. And the micro-rant rings true to me – the CR-system is problematic. The system tied to it, of the fairly codified challenges so that no precious PCs die just is wrong to me – I’m the school of DM that has a coherent world and thus, 1st level PCs in my world can meet fire giants – if they’re dumb enough to not run, they die. And sometimes they die if they’re in the wrong place at the wrong time and don’t have a good escape plan. That’s just how I roll – the entitlement of the 4.5 encounter adventuring day always sucked in my opinion and I just don’t like it. That being said, we’re talking about a commercial product here. And in such a product, CRs are expected. See Frog God Games or 4 Dollar Dungeons – you can run with an old-school philosophy and still have CRs. Furthermore, the CR-rating has one massive thing going for it – at a glimpse, a DM may determine the relative lethality of an encounter. Too easy? Add nasty terrain. Too powerful? Maybe include a variable for the PCs to facilitate an escape. To cut a long ramble short – while I subscribe to many points made here, the absence of CRs in this product has to be judged as an unnecessary flaw that will negatively impact the final rating.

Now the first module herein would be the titular “Call you a Fool” and is intended as a solo-adventure based on Jethro Tull’s “A Witch’s Promise.” The basic premise is rather simple, but from here on; Ill have to delve into SPOILERS. Potential players should jump to the conclusion.

So there’s a treasure in the forest, and, seeking it, the PC sees a glimpse of a woman, follows her into the darkness, defeats a random encounter and then is beset by a beast slightly beyond his/her capabilities. Enter the witch’s daughter Agatha, who helps. unbeknown to the PC, there’s a silver key that is the key to both the treasure and freeing the maiden from her imprisonment in the woods. The lady is unfortunately prevented from talking about her own imprisonment and, once the guardian of the key, a deadly leaf golem, has been defeated, it’s morality that decides over the fate of the maid and whether the PC will have earned a cohort (or even lover) and the treasure. It should be noted that, unfortunately, the statblocks provided here, while containing the necessary information, still adhere to a non-standard formatting that makes them seem quite cluttered, something unfortunately extending to all statblocks herein. It should also be noted that no explicit treasure is provided, but that would be a nitpick.

Adventure #2 is inspired by Led Zeppelin’s “The Battle of Evermore” – in which the PCs have to defend Queen Alena, the queen of Light, from the forces of Lord Night in a massive battle of endurance – at specific rounds, archons and the rising sun make it possible to withstand the nigh-endless onslaught and potentially, finally defeat the warrior – essentially, this is one big king-of-the-hill-encounter and would imho work better as full-blown war via army-rules in Ultimate Campaign for a sense of epicness, but oh well.

Adventure #3 is influenced by Moody Blues’ “Nights in White Satin” – in a turn on the title, this module is about two knight, buried and unable to voice their true feelings, thus bound to an unlife. In order to triumph here, the PCs have to explore the tomb erected in honor of the two champions and lay their surprisingly cooperative and reasonable spirits to rest.

Adventure #4, inspired by Metallica’s “The Thing That Should Not Be”, begins in medias res, with the PCs captured by Skum alongside a bunch of orcs, ready to be sacrificed to Dagon’s messenger in a ceremony soon to come – the whole module revolves around rping and finally escaping, which makes for a nice change of pace, even though the set-up per se is a bit blunt force and none too creative.

It should also be noted that no less than a massive 24 pages are devoted to battlemaps of all encounter areas, ranging from almost photograph-detailed to okay, but with the majority being nice.

Editing is generally very good, I noticed no significant amount of glitches. Formatting does have issues – the statblocks do not adhere to PFRPG-presentation-standards and the lack of CRs make this harder to use than it ought to be. Layout adheres to an easy-to-read 2-column standard with a full-color parchment-style background. The pdf has no art. The pdf also has no bookmarks, which is an unfortunate comfort detriment. The maps, as mentioned, are plenty and awesome for this low price-point.

Jeremy Cusker has demonstrated that he can write excellent, atmospheric adventures and indeed, here and there, some of that shines through here. Alas, the strict adherence to the themes of the songs makes these mini-modules feel rather one-dimensional, at least for me. Now I love all but the Metallica-track and I enjoy the homages to these classics for what they are, but as modules, the adventures herein feel very bare-bones, with minimum fluff, minimum choice, minimum…everything, really.

There’s simply not that much going in favor for any of the adventures herein – they are not bad, but I have seen the tropes they fulfill done better. Now if you’re looking for short modules as filler between two larger ones, this might do, and the same goes if you enjoy the music-themed angle, but other than that, I can primarily recommend this for its maps and low price-point, not necessarily the content it delivers. If I didn’t know better, I’d think that the great “End of Autumn” had been written by a completely different person. My final verdict will clock in at 2.5 stars, rounded up due to the low price and maps to 3 for the purpose of this platform.

You can get these modules here on OBS!