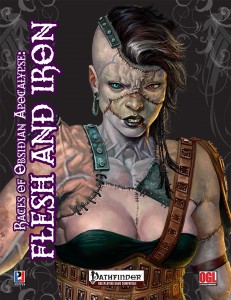 This racial supplement clocks in at 15 pages, 1 page front cover, 1 page editorial/SRD, leaving us with 13 pages of content, so let’s take a look!

We kick of this book with the Prometheans. These guys and gals thankfully have nothing to do with the ridiculously bad sci-fi movie and its clumsily disguised anti-science propaganda, but rather hearkens to the standard set by White Wolf to describe Prometheans as an euphemism for the created/artificial species – -or rather, for golem-like races.

Here, we make a distinction between cobbled-together Flesh Prometheans in the vein Frankenstein’s Monster, who receive +2 Con adn Int, -2 Wis, can sniff out carrion (and those severely wounded), have darkvision 60 ft, ferocity, may 1/day tap into old memories of one of their parts to get an insight bonus equal to their character level to a skill, get +2 to saves versus diseases and poisons and are healed by negative energy and harmed by positive energy as a drawback (or bonus in the apocalyptic world of Obsidian Apocalypse). All in all, a solid race, with the energy affinity making for a nice tip .in the high-powered OA-default environment, this is a bonus, in a regular setting probably a hindrance. Nice take on the Half-undead race.

The second type of Prometheans would be the Clockwork Prometheans – or, to give you a better understanding – brains-in-a-jar in power-armors. Yeah. Awesome concept. These fellows receive +2 Str and Int, -2 Dex are slow, receive resistance 5 against negative energy, lose no hp when they gain a negative level and also receive a +2 bonus to saves versus death-effects, energy drain, negative energy and necromancy spells and SPs. They also receive a +2 natural armor and +2 to saves versus disease, mind-affecting effects, poisons and exhaustion/fatigue-inducing effects. They need non eat, sleep or breathe. They are considered half-constructs and cannot be raised or resurrected. Both receive the Promethean subtype and the clockwork Prometheans are also rather strong (and not suitable for low powered gaming), but fit in well within the context of Obsidian Apocalypse’s high-stakes gaming. That being said, if you don’t bat an eye at the ARG-races, these probably won’t prove too much either.

Gaining weaponiszed weapon-grafts (or if you’re a machinesmith, even mobius weapons), shutting temporarily down all emotion, stopping bleed effects, natural attacks – okay feat options. Now personally, I don’t like the automatic detection of magical auras and undead one of the feats grants – auto-detects tend to result in broken in-game logic. The race comes with favored class options, which suffer in parts from minor glitches – like “Gain a +1/2 bonus to rolls to critical hits while raging.” Yeah, not all crits are meant – there’s a “confirm” missing here. +1 to CMD versus two maneuvers of your choice is cool, though I would have appreciated information on whether these can be taken again with different maneuvers or whether the bonus always applies to the same two maneuvers. Nice to see – FCOs for both Machinesmith and psionic classes.

Now the spirit-of-vengeance-possessed Raijin, absent from the basic OA-book also make a return. They receive -2 Cha, a Die Hard-like effect (with synergy with the feat), +2 to will-saves and fort-saves, treat any part of their body/weapons/armor as +1 for the purpose of bypassing DR and their possessing spirit receives an ego and follows the rules for magic items – smart. Instead of being a base-race, the Raijin is essentially a story-reward, perhaps the result of a story-feat etc.A total of 7 feats accompany the race and allows the Raijin to affect the minds of otherwise immune mindless undead. Slightly annoying – the cool and iconic, if a bit powerful option to control creatures via possession sports quite a number of easily avoidable editing glitches that make the ability slightly harder to understand than it ought to be. Personally, I think this feat requires a kind of daily limit – control of foes via touch as a supernatural ability sans limit is rather powerful even before further augmenting the ability with supplemental feats. A final feat allows you to make necromancy-spells sickening.

The final race would be the Uzamati- and they are weird – they have darkvision 60 ft., are immune to poison, sleep, paralysis, disease, nausea, fatigue and exhaustion and the sickened condition. Uzamati are healed by negative energy as if they were undead, but unlike undead or constructs, they have con-scores and need to make fort-saves. They also heal damage normally, are not immune to mind-influencing effects, are subject to critical hits, nonlethal damage, stun, ability damage and drain and death/necromancy-effects. As beings of pure negative energy, the Uzamati cannot be raised or resurrected and do not need to sleep, eat or drink. They also get +2 to Int, Wis or Cha and Necromantic Phasing as a bonus feat. …which should simply be part of the race write-up, since every Uzamati gets it.

This feat nets you the ability to phase away for cha-level + chosen mental attribute modifier rounds per day. While phased out, they receive half damage from corporeal damage sources., may phase through and enter solid objects, deal +1 negative energy damage with unarmed attacks that cannot heal the Uzamati or other negative energy-healing creatures. Foes trying to perceive you receive a penalty of -2 to perception and using the ability on a plane “That has a strong negative energy makes you vulnerable to all damage.” So…does this mean double damage from everything? +50% damage? What constitutes strong negative energy? The planar trait for strong negative energy affinity? Don’t know. There are also 4 traits – one of which makes it possible to be healed by positive/negative energy normally…which is weird, for the racial traits specify that these do work normally on you. Something went wrong here. For just a feat, channel energy can have all dice upgraded to d8, which is too strong and phased out damage-increase to d6 is okay, as is affecting incorporeal creatures. Phasing through walls is also awesome.

The Uzamati as a people of artificially created body-simulacra for negative energy-bound souls are a downright awesome concept. I also like quite a few of their rules and the phasing is cool – but since it’s essentially an outsourced racial power, it does far too much at once – had this feat been split up into multiple feats and the race studded with some vulnerability, it would be utterly awesome – as written, it is an overpowered beast that imho even transcends the power-level of the strong Obsidian Apocalypse races with the vast array of unnecessary immunities. Fixable? Sure.

Editing and formatting are good, but not glorious. There are quite a few glitches in here that could have been easily caught, but formal ones and in the rules-language. The pdf adheres to a drop-dead-gorgeous 2-column standard and the ridiculously awesome artworks, all of them originals (though two have been used before in Obsidian Apocalypse) make this one of the most beautiful pdfs out there, especially for the low asking price. The pdf has no bookmarks, which is a minor comfort detriment.

Authors Rich Redman and Wendall Roy have created an array of truly inspired races that all breathe high-concept awesomeness. The balance in respect to the Obsidian Twilight-versions, where available, has been significantly mproved, though imho, there are still some hick-ups and feature-bloat, especially with the Uzamati, to be found here. These races are not for low-powered games, be aware of that. While the Uzamati could use a nerfing, the other races are high-concept and damn cool. On the downside, we get no FCOs for the Uzamati and no age, height and weight tables for ANY of the new races, which is a major detriment in my book – especially knowing how much the massive Prometheans weigh would have been more than crucial; Raijin and Uzamati can be explained by just adhering to base creature/human defaults.

This pdf has all the makings of greatness and awesomeness and falls short by a small margin – with the Uzamati’s balance-issues, glitches and missing age, height and weight tables conspiring to make this slightly less than its awesome concepts deserve. My final verdict will hence clock in at 3.5 stars, rounded up to 4 for the purpose of this platform due to the high-concept, cool ideas and with an explicit recommendation if you’re looking for strong races, are willing to do a bit of crunch-balancing or just in love with the cool concepts.

You can get these high-concept races here on OBS!