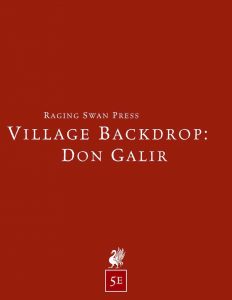 Anyhow, as always in the series, we get the usual quality of life benefits for the GM that render this series so beloved: We receive notes on local dressing habits, nomenclature, and some sample pieces of information for PCs that actually do their legwork. A plus: Dwarves have an easier time here, getting advantage on their check. 6 rumors are presented as well. No global marketplace information regarding magic items for sale is provided.

Speaking of character: 4 NPCs are provided in Raging Swan Press’ usual, flavor-centric manner (in 5e, these make use of the NPC default stats), and as always, the keyed locales come with neat read-aloud text. The supplement goes a bit farther than usual, though: Contained herein are brief notes on the assumed dwarven pantheon worshiped in the duchy of Ashlar, and the supplement features a new martial weapon, the thunderaxe, which basically a combined axe/hammer. I have less issues with this iteration of the weapon than with the one presented e.g. for PF1, but I think its execution is a bit odd: It’s considered to be a non-versatile weapon, and only becomes versatile when trained in it. Wouldn’t it make more sense, considering it and comparable weapons, to make it heavy unless trained in?

More importantly, the new material, Tordel, the soul steel, is problematic: The material is said to trap the souls of the slain and gain power with the wielder. Okay, so does it detect as necromancy? Are there any mechanics? Adamatine reduces critical hits, mithral is more flexible – so, what does this do mechanically? No clue. This is an idea – and that’s all it is. It is NOT a functional material as far as PFRPG is concerned.

Steve Hood’s take on the dwarven hold (additional design by Martin Webb) is interesting indeed: Making Wellswood’s setup a backdrop for a cool subterranean village is clever and incredibly efficient – particularly in the details: From fishing rods available to the monthly festival, this place feels fantastic in a grounded, plausible way, and really captured my imagination. The 5e-iteration feels a bit more refined than the two ones for the Pathfinder editions here, and while the map-situation somewhat irked me, my final verdict will clock in at 4.5 stars, rounded up due to in dubio pro reo.