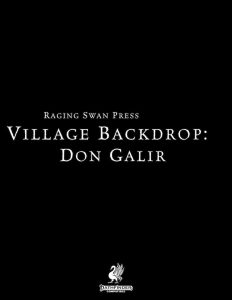 Anyhow, as always in the series, we get the usual quality of life benefits for the GM that render this series so beloved: We receive notes on local dressing habits, nomenclature, and some sample pieces of information for PCs that actually do their legwork. A plus: Dwarves have an easier time here, though the bonus they receive should be typed. 6 rumors are presented as well. Kudos: Village lore can be properly assessed via Society, rumors via Diplomacy – makes sense. In the latter case, it’d have made sense to tie correct/incorrect rumors to the (critical) success/failure engine of PF2. No global marketplace information regarding magic items for sale is provided.

The pdf also features a table of 20 small events and pieces of dressing to add further character to the settlement. Did I mention the secret society?

Speaking of character: 4 NPCs are provided in Raging Swan Press’ usual, flavor-centric manner, and as always, the keyed locales come with neat read-aloud text. The supplement goes a bit farther than usual, though: Contained herein are brief notes on the assumed dwarven pantheon worshiped in the duchy of Ashlar, and the supplement features a new uncommon advanced weapon (dwarf, shove and sweep traits), the thunderaxe, which basically a combined axe/hammer – on a nitpicky side,PF2 usually expresses the ability to use different damage types via the versatile weapon trait, which is missing here – instead, we have 1d8 bludgeoning or 1d8 slashing” listed in the damage-section. Functional, but not perfectly adhering to the system’s conventions. More important, the new material, Tordel, the soul steel, is problematic: It is “as expensive as mithral or adamantine.” So, which is it? The differences in price and power are significant! What’s the HP per inch? What’s the BT? Where are the sample stats for chunks, ingots, etc.? The material is said to trap the souls of the slain and gain power with the wielder. Okay, so does it detect as necromancy? Are there any mechanics? This is an idea – and that’s all it is. It is NOT a functional material as far as PF2 is concerned.

Steve Hood’s take on the dwarven hold (additional design by Martin Webb)  is interesting indeed: Making Wellswood’s setup a backdrop for a cool subterranean village is clever and incredibly efficient – particularly in the details: From fishing tackles available (properly adjusted for PF2) to the monthly festival, this place feels fantastic in a grounded, plausible way, and really captured my imagination. In many ways, it is a remarkable success, but also one marred by several small hiccups. These are somewhat akin to the ones plaguing the version for Pathfinder’s first edition. Additionally, it should be stated that the supplement doesn’t really do anything with all the cool things you can do in PF2, but not in other systems, making it feel very much like a linear conversion. The collective of these niggles make it impossible for me to rate this higher than 3.5 stars, rounded up due to in dubio pro reo.