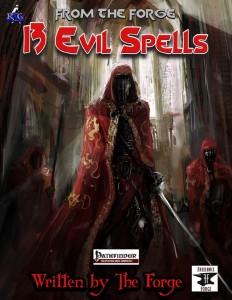 This little pdf clocks in at 9 pages, 1 page front cover, 1 page editorial,1 page SRD, leaving us with 6 pages of content, so let’s take a look, shall we?

So, what is this? The Freelance Forge can be considered a kind of think tank of game designers and this pdf constitutes one of their efforts. After a short, fluffy introduction, we dive right into the spells – so what do they do?

Well, first of all, they sport an iconic imagery – take the first spell, Blood Shackles, which causes not only damage to the target, but also binds it, with ½ your CL as an enhancement bonus to CMB/CMD for the purposes of binding the target. The target may try to escape, but trying causes damage. This is per se a cool spell, but it does not specify the difficulty of the check to escape the pin, nor whether a grapple can be re-initiated. Granted, one can assume from conjecture that the spell utilizes the enhanced CMB/CMD of the caster, but still – slightly more precise wording would have helped here.

The cle-exclusive bonewrench damages foes – and, if lethal, it animates the skeleton of the destroyed creature. Solid insult-to-injury-spell, I guess. The low level Consumption spell is more interesting, in that it triggers ongoing diseases in the target creature, making them break out and even requiring new saves…oh, and if the target is healthy, the poor sap instead gets a penalty to avoid contracting more diseases. Nasty and fun – two thumbs up for this one. Corrupt energy is also interesting in that it makes e.g. the next positive energy-healing negative energy instead. The spell manages to juggle the DC-issue this generates pretty well, but I wished it had a caveat for heal/harm, since there, discrepancy between the two is more asymmetrical.

Corrupt Haze can be considered an evil fireshield-type spell, with damage versus good targets and mitigated effects of holy attacks – nice one, especially since it does not fall into the all-too-common “holy damage”-trap and instead offers the correct terminology. Curse of Worms should bring a grin to the face of any DM going for Age of Worms, or any aficionado of Kyuss and the crawling host – whenever the target is damaged, fiendish leeches crawl from the wounds, forming swarms under your command. Yeah. Awesome. Dark Contract would be a mortal’s imitation of a devil’s contract, exchanging limited wishes for massive power of the creature’s soul while the target is alive. Interesting spell to explain how certain evil organizations manage to avoid implosion.

Exsanguination causes devastating bleed damage to the target and is hard to stop – even by magical means. And it is an example that shows the different designers at work – for it comes with a caveat that precludes blood-less creatures from being affected, a caveat absent from both Blood Shackles and Bonewrench. All in all – love exsanguination. Heart-Eater Curse would be one of those nifty storytelling-spells – curse a target and it starts to suffer from starvation that never kills it…until it sees and tastes the delicious heart inside that freshly slain foe. Hej, hearts = profane power…so at least there’s a plus to the murderous compulsion that makes the target crave the hearts of those all too delicious murder hobo compadres… Incite Greed forces the target to steal an object and hold on to it. Yeah. Lame and can be done with other spells. Rumor allows you to spread…rumors about targets, though I really do not get what makes telling a falshehood or making a target steal vile enough to qualify for the [evil] descriptor – I mean, come on, you can dominate people into killing their families without the spell being evil. Same goes for Steal Thoughts, which can be considered somewhat akin to psionic favorite modify memory, but with a much more limited focus. Whispers of Evil temporarily causes an alignment change, but one that does not require an atonement. Okay, I guess.

Editing and formatting are very good, I noticed no significant glitches. Layout adheres to Rogue Genius Games’ two-column standard and the thematically-fitting stock-art is nice. The pdf comes fully bookmarked for your convenience.

Clay Blankenship, Victoria Jaczko, Mike Kimmel, Andrew Marlowe, Jacob W. Michaels, Mark Nordheim, Nick Wasko – congratulations for delivering a solid pdf indeed. I’ve read quite a lot of spellbooks and this one actually had some very, very nice ideas herein. In fact, I’ll be modifying some spell-lists soon to include some of these spells. That being said, one can also see the different voices and foci of the designers, which is not a bad thing per se… but, as mentioned above, some spells feel just a tad bit more thorough. Still, from cool story-spells to neat combat-options, this pdf has some nice fodder and thus deserves a final verdict of 3.5 stars, rounded up to 4 for the purpose of this platform.

You can get these nasty spells here on OBS and here on d20pfsrd.com’s shop!