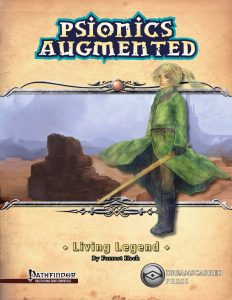 This pdf clocks in at 18 pages, 1 page front cover, 1 page editorial, 1 page SRD, 1 page advertisement, leaving us with 14 pages of content, so let’s take a look!

The pdf begins with an interesting set of observations and fluff pertaining the interaction of psychic magic and psionics; it may seem odd, but to me, the two always felt radically different and the pdf points this out rather well: Psionic magic stems from internal forces, whereas psychic magic is gained from an external power – so yes, establishing distinct leitmotifs here males very much sense to me and is a nice lead-in for the first Occult/Psionic-crossover book. In case you haven’t thought about the two systems in that way, the introductory section certainly helps generating a holistic perspective here.

But we’re here for the eponymous living legend…which, in theory could be classified as a soulknife archetype. Well, in the same way you could call the psychic a wizard archetype. The living legend is a massive tweak of the engine, basically a whole new class. Let me reiterate: The archetype gains an extended class skill list, adding Linguistics, all Knowledge and Perform skills to the class skills available. They employ Intelligence instead of Wisdom as a key ability modifier. These beings are also the protagonists of their own legends . thus, each day, they can meditate to prepare themselves for a character archetype via a 1-hour séance. At the end of the séance, the living legend chooses two legendary spirits from a cadre of 7 to inhabit him for the day; a living legend can only hold these two roles per day, so choose wisely. One of the roles is active and one passive and they can be switched as a swift action (starting at 13th level, Int-mod times as a free action per day), but regardless of whether active or passive, the living legend is subject to the spirit’s influence, taboos, etc. The active role conveys benefits: A lesser power at 1st level, intermediate power at 4th, greater at 10th and supreme power at 16th level. A living legend may choose to not be beholden to one of the roles’ influences, but loses the benefit of the role’s narrative for the day. Breaking a taboo nets a -2 to atk, damage, ability- and skill-checks, as well as saving throws for one hour. The penalty is not cumulative, but its duration extends on subsequent violations. This eliminates psychic strike and the blade skills gained at the respective power levels 4th, 10th and 16th.

The roles thus chosen also determine the precise mind blade and both the iteration for the active and passive role are available. Each of the mind blades the archetype has may be customized in their own ways.

Changing roles can automatically reshape the mind blade. Starting at 1st level, the living legend also receives the benefits of a feat as determined by the active role – for Archmage, that would be Precise Shot, for Marshal Lookout, etc. – and yes, if he has the feat, he may choose another appropriate for the archetype. Not all blade skills are available for the living legend, but instead, they can select some unique blade skills designated as legendary stunts. While tied to a role, they can be employed regardless of role and they have a minimum level of 6th; apart from that, they act like blade skills and compatibility with blade skill-based archetypes and prerequisites is maintained.

The tricks granted are interesting: For one, laying a psionic mark on foes, penalizing attacks versus all but the living legend, expending psionic focus to generate a crashing, conical wave of piercing/slashing blade fragments, adding the brand of the heretic as a debuff, hiding in shadows, putting a kind of psionic mine on foes…the basic array here is damn cool. But what does that have to do with the active role? Well, each of these tricks has an additional benefit when you’re in the appropriate active role: Archmages can e.g. generate an energy blast cone instead of one based on physical damage. At 20th level, the living legend’s stories allow the character to be brought back from the dead by just knowing the stories and casting the appropriate spells (which are not italicized), without needing a body. Oh, and immunity versus soul entrapment and the like. As a minor complaint – the ability end with “He does not gain” – a part of the sentence seems to be missing here.

Now, obviously, the class chassis stands and falls with the legendary roles based on the mythic paths – so what do we get? Well, for once, the authors understand the design paradigm of Occult Adventures. Utility beyond numerical bonuses, flavorful tricks, breadth and, more importantly, hard-wired, amazing roleplaying hooks. The archmage, to give you an example, may choose as a taboo either eschewing all faith in the divine, use magical/psionic solutions over mundane ones or be driven by vast curiosity. Each of the spirits comes with a favored location, notes on influences and sports a narrative – these would be appropriate bonuses, as mentioned before: In the archmage’s case, that would be insight bonuses to Int and Int-based checks equal to the maximum enhancement bonus of the mind blade, which is a significant, but feasible bonus. As a mind blade modification, the archmage employs raw mystic might, which translates to a ranged weapon! The active powers granted allow for the use of spell trigger/completion items, a bonus versus creatures analyzed, adding a burst to mind blade attacks or 1/day poach a sorc/wiz spell. Pretty amazing!

The champion’s narrative supports your Strength- and Strength-based checks and provides access to any mind blade shape but technological weaponry. The active powers provide significantly enhanced defenses versus spells and save-prompting tricks, allow you to add maneuvers to regular attacks, move up to your movement as a swift action (or even free action!) or generate, at the highest levels dead magic/null psionics fields. Guardians get enhances damage soaking, with better AC, DR/resistance and the option to interpose yourself between allies and assaults…and late in the game, even ignore an attack completely! Hierophants may inflict nonlethal damage, get narrative bonuses, unsurprisingly to Wis-based checks, receive limited channeling, etc. The marshall grants the expected teamwork/tactician/buffing tricks and the overmind is interesting – not how psychic strike’s lost? Well, with this role, you can still have the blade count as charged, allowing for the combo tricks inherent in that mechanic. Oh, and telekinetic throw, mental detection of nearby beings…you get the idea. the trickster does just what you’d expect.

The pdf also features a new crystalline focus item class for the living legend, the crystal bookmark, which may be used to increase the enhancement bonus of a storied sword and thus is appropriately high priced in its 3 iterations. For our convenience, the feats employed by the class have been reprinted here (thank you – seriously, love the comfort here!) and the pdf does also offer notes on particularly high magic/psionics campaigns (using e.g. the Path of War power level) and notes on how to customize the archetype to work in such a context.

Editing and formatting are good on a formal level, though not perfect – the missing sentence fragment in the capstone is a bit jarring. On a rules-level, this is meticulously precise and well-crafted – highest level complexity wording, waterproof and airtight. Kudos! Layout adheres to an aesthetically pleasing evolution of Dreamscarred Press’ two-column full-color standard and is nice. The artworks provided, with a pastel, somewhat anime-like aesthetic by Christina Olszweski are gorgeous and fit the theme well. The pdf comes with a second, more printer-friendly iteration – kudos for going the extra mile!

Psionics Augmented, as a series, has been a somewhat uneven experience for me; There are some aspects in the books that I had to nerf in my games, that point towards a higher-powered playstyle as the core target demographics of the books. It was always my contention that a good engine can carry either…but in the end, PA: Soulknives suckered me in. I should have bashed that one at least a bit, but couldn’t bring myself to do it, because the playing experience was too cool. Still, I couldn’t help but ramble on about suggested modifications etc. and expected, to some degree, to see that as a kind of leitmotif from now on.

The Living Legend is one of the most compelling archetypes I have ever read. I completely rewires the soulknife, even beyond what PA: Soulknives offered…and goes one step further. It understands the design paradigm, the emphasis on ROLEplaying Occult Adventures championed and sacrifices nothing of Dreamscarred Press’ crunch complexity or precision. The living legend, even in the hands of a novice, is a powerful, rewarding playing experience, though one that will not even break 15-pt-buy games while still working in high-powered high fantasy/psionics/point-buy environments. Beyond the system’s complexity and rewarding nature, the expertly woven fluff of the archetype adds to the option immensely. I want to play this guy. In short: Excellent mastery of crunch and fluff, anathema to cookie-cutter, bland designs and wholly new concepts galore. If this is what we can expect of Dreamscarred Press taking on the Occult, consider me utterly stoked for more!

Congratulations to lead designer Forrest Heck and Kevin Ryan, Doug Haworth and Adam Boucher – this is one excellent supplement and the first Psionics Augmented-book I can unanimously recommend, sans any sense of hesitation. 5 stars + seal of approval…and just short of being a candidate for my Top Ten due to the scarce few minor hiccups.

Seriously, get this…and write the legends of your characters!