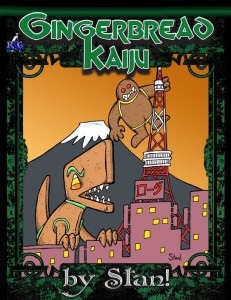 This game-pdf is 13 pages long, 1 page front cover, leaving us with 12 pages of content, so how does this work?

Well, first skip to page 10, which includes a tasty gingerbread recipe and instructions to make Gingerbread. 2 pages contain a total of 8 silhouettes you can print out, cut and then put on the gingerbread to make your characters – for this is all about gingerbread monsters fighting the delicious fight.

In order to play, not much is required – 1 Gingerbread Kaiju per player, 1 deck of standard playing cards and a d12. Optionally, icing can be used to make the Kaiju more detailed (and tasty!) and the game also requires some assorted cookies, baked goods or alternatively inedible markers. Before play, sort the cards into two decks: The ward deck and the karma deck. The ward-deck contains 20 cards (10s, Jacks, Queens, Kings and Aces of suits) and is evenly distributed on a table on a 4×5 grid, face down. The other deck contains the remaining numbers and two jokers. The d12 is used to determine from where the Kaiju enters Tokyo and to determine who goes first.

Now I’ve mentioned other markers: Full-sized candy represents buildings, fun-sized candy equipment, round baked goods (like oreos and chips) are UFOs and Skittles, M&M’s and similar small pieces would be people – all of these enter the resource bank.

Now each ward-card corresponds to a special event with buildings and people and is revealed upon flipping the card, which happens as soon as a Kaiju enters the area. Every round, you may spend up to two action points to move, bite stomp (which are resolved efficiency-wise with the d12), use special powers or even mutate in the right areas. Destroyed areas and people net the Kaiju more power, which in turn helps it stave off damage and conserve its delicious hit points. (Also, power consumed means that you may eat goodies! Yay!)

Also, every round, at the end, you draw a karma-card, which, depending on the card, usually allows you do unpleasant things to other Kaiju, though you may have a maximum of karma cards at one time equal to the amount of parts your Kaiju has – which are determined by 8 general basic statblocks for the respective prototypical Kaiju. These include, btw., Cocoonra, the Guardian of all Baked Goods, Globbulon, Giddy Ra (the dragon who can’t make up his mind), King Konk and, of course, Bakedzilla. It should be noted that each of the Kaiju has its own signature attacks and tactical options, which karma cards that allow you to reveal adjacent wards (or plainly do mean things to the other Kaiju) further expand.

Editing and formatting are top-notch, I didn’t notice any glitches. Layout adheres to a nice, easy to read two-column portrait standard with Stan!’s signature artworks throughout. The pdf has no bookmarks, which is a slight pity, but since one probably should print these pages out anyway, that will not be considered detrimental in this case.

All right, after a match of industry legend Stan!’s “Plätzchen-Kaiju” (I substituted another dough), I can attest to this game being fun – especially for everyone who is gleefully nostalgic for the Kaiju and versed in their respective mythologies – when turtlesaurus just has its shell left and starts shooting fire out of every opening of its holes, I know that I was chuckling. The rules per se are simple to grasp, though at least in the beginning, a list of card-effects for the respective wards should always be handy. If there was one weakness to the rules and my understanding of them would be that the pdf could have made clearer how many karma cards one has at the beginning and that the buildings etc. retain their value when added to the power pool. Apart from that admittedly nitpicky complaint, we have a neat selection of Kaiju here and a game, where there is a real temptation for tacticians to ignore the more sound option to go for the favorite candy. All in all, a fun game and one that will not only be fun for roleplaying veterans and kaiju-aficionados, but also for kids (though one ability might require renaming, depending on your sensibilities – it involves the finger). I know I would have been ALL OVER this game; Bake Gingerbread, design it and then prove one’s mettle versus my friends in a battle for chocolaty goodness? Yes! This is fun past-time and not only great for the gingerbread-time, but could also be played with bread, spicy food or the like. Fun, engaging and very affordable, this is easily worth a final verdict of 5 stars. Now… can we have expansions for more Kaiju? Something seems to have happened to the old ones – they’re curiously gone… Final verdict? 4.5 stars, rounded up to 5.

You can get this fun game here on OBS!