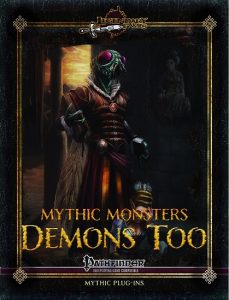 This time around, we begin this installment with a nice piece of introductory prose before diving right into the creatures, the first of which would be the CR 4/MR 1 Abrikandilu, whose theme of vanity/destruction has been amplified to being able to twist reflections of targets and mutilate those hapless creatures seeking to do battle with this spawn of the abyss – great low CR/MR-demon!

The CR 6/MR 2 Brimorak’s smoke breath can now choke its victims and its general modifications are solid as well – particularly since its smoke vision means that it is not hampered by its own tricks. At CR 3/MR 1, the mythic iteration of the cambion gets sinfrenzy – with each deadly sin aligned with a class, granting appropriate bonuses. Similarly, the sin-theme extends to a trick that lets the cambion destabilize persons and make their ID run rampant. This take on the cambion is absolutely superb and fun – two thumbs up!! Similarly cool at the same CR/MR: dretches now can instill sloth in creatures and may use miserable pity/unadulterated loathing – once again, great way to upgrade classics!

The mythic coloxus at CR 15/MR 6 gets a death attack, a Cha-drain-causing bite, can mesmerize targets with his drone and perform a particularly powerful possession -and yes, this is a great, flavorful upgrade. The CR 12/MR 5 Derakni may only get one new ability, but that one is awesome – a detachable vescavor swarm aura! Yes, damn cool! The CR 23/MR 9 Gallu increase teamwork feat efficiency for demons and provide bonuses…and their total statblock + abilities cover 2 pages. With [good] and[lawful]-inhibiting aura, mythic power-based resurrection of demonic allies and storms of blood and eruptions of wounds, these commanders of the abyss are fearsome beasts to behold!

The disgusting Gibrileth can enhance SPs to become mythic and generate tumor familiars and make them die for himself…and use them as clones. Oh, and acidic flesh-eating tumors. EW. (And I mean that as a true compliment!) The Kithangian clocks in at CR 11/MR 4 and is glorious – with adamantine chitin and touch-based tongue-attacks that draw forth the target’s bestial impulses, this is, once again, a great upgrade for the base creature. (FYI: Combat-capabilities are enhanced as well, thanks to two mythic feats reprinted here – Crippling Grip and Savage Grip.)

The CR 5/MR 2 Schir can steal style or teamwork feats, causes healing-resistant wound and moves unimpeded through difficult terrain, upgrading the pretty soulless base creature into a cool and valid threat. At CR 18/MR 7, the Seraptis draws healing from bleeding damage, has a powerful means of controlling foes and a gaze attack that instills suicidal urges…and yes, while here we have more of an upgrade instead of a reinvention, it is a feasible and cool upgrade. The CR 20/MR 8 iteration of the mythic shemhazian, on the other hand, is finally more than just a shredder – with an apex predator’s power, retribution for critical hits (take that, crit-fisher builds!) and the option to mirror rages and similar effects, this demon now finally has a proper, unique identity. And yes, the brutal melee capacity of the beast has been enhanced as well Two thumbs up!

The pdf, of course, also features a new demon: The CR 9/MR 3 Skrekalga, which looks a bit like a mutated aardvark-humanoid/osyluth hybrid with a stinger-like protusion instead of a mouth -I’m not sure whether I consider these demons goofy or disturbing – but focus and puckered fingers probably will make the latter – for these creature fuel the darkest of obsessions with their auras, contagious compulsions and the option to telepathically instill seeds of darkest desires. These demons can conceivably turn nations against one another and are, ultimately, disturbing and dangerous foes and a welcome addition to the roster of the abyssal hordes.

Editing and formatting are top-notch, I noticed no grievous glitches. Layout adheres to Legendary Games two-column full color standard. The original of full color art provided are high-quality and awesome, though fans of Legendary Games will know quite a few of them from previous publications. The pdf comes fully bookmarked for your convenience.

Jason Nelson, Alistair Rigg, Steven T. Helt, Todd Stewart, Jim Groves, Nicolas Logue – these gentlemen have crafted a selection of demons that mops the floor with its predecessor – which, back what seems like ages ago, was the first Mythic Monsters-selection. Particularly in the instances where bland, identity-less cannon-fodder or simple “I kill you”-creatures have been taken and made into something unique and evocative, this pdf shines. A lot of the mythic demons herein lend sorely needed identities and unique tricks to the creatures, making them worthy of scorn and hatred…and making them feel more demonic. These are not kind “I kill you”-demons – these guys feel more like the darkness of the Warhammer universe, like things you should FEAR. I *LOVE* this pdf for that!

There is another reason I love this pdf: The collective theme and style of the demons herein – it may be coincidence or intention…but know what this pdf is? It’s the “Make WotR not suck anymore”-toolkit. Take this and Path of Villains and bolster the sorely outclassed demonic hordes of the worldwound and actually make the PCs struggle. Seriously…any WotR-GM should consider this a must-buy book.

How to rate this? Well, while I wasn’t too impressed by the introductory fiction this time around, that is more than made up for by the sheer awesomeness of practically all builds in this book. 5 stars + seal of approval.

You can get these superb demons here on OBS!