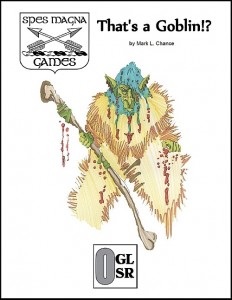 This supplement/module for the OSR-ruleset of old-school gaming is 21 pages long, 1 page front cover, 1 page editorial, 1 page SRD, leaving us with 18 pages of content, so let’s take a look, shall we?

On the crunchy side, we kick this pdf off  with a d24-list of random goblin traits – and damn are they fun: Stinking belches, muscled goblins, blood-draining goblins, eyes that stick out like those of a chameleon – you name it and get some truly weird mutations with  neat rules-representations. Advice is also given on adding the CL of some of the modifications. From Sewer Creepers to Leaf Lurkers, we also get 3 different types of goblins and 6 tactics can be assigned to goblins to net them bonuses when trying to kill animals of putting things to the torch.

Beyond these, we get 3 new weapons – from child catchers to a thurible filled with noxious fluids, we get a neat little arsenal. There is also a d16-table of goblin traits to make them not your average humanoids, but rather dwellers of the realms of fey – with druidic powers, dimension doors, fey dances and water-breathing goblins, size-changing and other options.

After all these options, we get a total of 6 statblocks of goblins – from a burn squad to obese  drinkers and goblins with magical prowess.

The second half of her product is the Tributary of Terror, a mini-adventure for levels 2 to 4. Hence, the following part will contain SPOILERS. Potential players should jump to the conclusion.

All right, still here? The (mapped) village of Reyr’s Well is fully detailed in a concise, gazetteer-like write-u that even provides us with a menu for the tavern -a nice level of detail supplemented further by local rumors. And of course, the village has troubles – a fey greentooth goblin has infiltrated the well and needs to be taken out. Straight-forward nice little sidetrek – but also one that ultimately is utterly and completely generic apart from its adversary: The sidetrek here feels a bit forced – as if a gazetteer wasn’t enough. There is no reason why the foe should be a goblin and honestly, more options for the green menaces or a more expanded sandboxy base with some hooks would have been more prudent.

Editing and formatting are top-notch, I didn’t notice any glitches. Layout adheres to a printer-friendly 2-column standard and the pdf comes fully bookmarked for your convenience. The pdf also comes with ok hand-drawn artworks – nothing special, but ok at this price-point.

Spes Magna Games’ mastermind Mark L. Chance has created a nice toolkit to get goblins some additional oomph that is not only relevant for S&W-DMs, but which should also be rather interesting for DMs of other rulesets – the ideas are suffused with a subtle humor that manages to evoke danger as well as keeping the goofy component associated with the little menaces.

And as much as I love the level of detail, the goofy abilities – the sidetrek in here is simply LAME with a capital “l” – it’s the equivalent of Lassie barking that Timmy fell down the well when the town’s set-up hints that so much more would have been possible. This is what drags the offering down from straight 5 stars to my final verdict – 4 stars and a recommendation to check it out for friends of goblins.

You can add some oomph to your goblins here on OBS !