Leader of the Pack: Humanoids 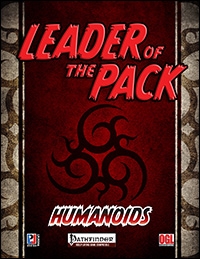 The first installment of LPJr Design’s “Leader of the Pack”-series is 15 pages long, 1 page front cover, 1 page editorial/SRD, leaving us with 13 pages of content, so let’s take a look!

Know the feeling? You’ve had your game derailed/a adventure idea, but no ready to go statblock for the boss of a tribe/group? Don’t want to slap on the advanced creature template on that sucker again? Well, Leader of the Pack is here to remedy that by providing boss-adversaries for roaming tribes, lieutenants etc. – this time, the focus being on humanoids:

Bugbears are the first humanoids covered herein, and the two characters provided herein would be a torture-master (fighter 2/ rogue 5 at CR 8) and the Lord of Fear, a CR 10 antipaladin 8. Problem – the Lord of Fear should be CR 9 – 8 levels -1 +2 for the racial HD. Yes, a minor hick-up, but in supplements like this, all designed for drop-and-go, such glitches way heavily. Each of the leaders in this supplement comes with one short plot hook as well as an array of different sample encounters (i.e. with mooks, ELs and XP-values assigned etc.).

Gnolls get the Gnoll Huntsmaster, a ranger 5 at CR 6 that has a formatting glitch that does not have Defense properly highlighted and a Shaman at CR 7 that is a cleric 7. If you haven’t figured out – the CR of the cleric is wrong.

Goblins may now be led by a fighter 6 chieftain (for a CR of 5) or a pyromancer (sorc 5) at CR 4, withe specially the latter being more potent than one would expect for a creature of this power when played properly by a DM.

Hobgoblins may be led by a CR 4 Lieutenant (tactician fighter 5) or a CR 7 Battle Priest (cleric 8), with both builds fitting well the martially-inclined, relatively strategic mindset of these beings.

Finally, we get a CR 6 Scarred Witch doctor 7 for orcs as well as an orcish barbarian king at CR 9 – both builds being okay, if not that mind-boggling.

The pdf ends with a glorious sample 1-page lair map with a grid – this map is awesome and will see some use in my games!

Editing and formatting are good, though I did notice some glitches. Layout adheres to a two-column full-color standard with fitting full-color stock art. The map deserves special mention, since I did not expect to get such a high-quality full color map at this price-point. The pdf comes fully bookmarked for your convenience and with a second, more printer-friendly version.

The pdf offers interesting builds and some that are a bit more straight-forward than I would have liked – a bit more archetype use or slightly more lethal builds would have gone a long way here. Perhaps it’s just me, but I consider archetyped/ multiclass-monsters much more useful than just ones that have straight vanilla class-levels applied – I can add 10 levels of fighter in my head on the fly, but add multiclassing/archetype and it gets a tad bit more complex. So yeah, I’d like to see more of the slightly more complex builds found herein and less of the straight, relatively bland one-class-no-archetype progressions.

Still, Mike Kimmel has delivered a nice kick-off for the series, though one that has still room for improvement: More complexity, no glitches and we have a cult-series in the making here. At the fair price of $3.50, I feel justified in rating this offering a solid 3.5 stars, rounded down to 3 for the purpose of this platform due to the glitches preventing me from rounding up by a margin.