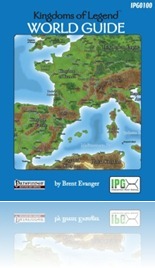 After getting a neat 1-page full color map, we are introduced to the basic premise of the setting, for which this book can be considered the gazetteer, the Kingdoms of Legend. The basic premise of the setting is that the Kingdoms of Legend are an alternate version of our own world in which races like elves, dwarves, orcs etc. exist and magic works. That also means that we’ll get the new half-dwarf and half-gnome races, which are okay, design-wise, but nothing to get too excited about.

Oh boy, after reading that, I was almost positive that there would be some aspects I wouldn’t like. Turns out that author Brent Evanger has invested quite an effort into not just lazily slapping “fantasy” on our history and painstakingly researched 4 different sets of names for the twelve gods of the setting.

In fact, the category where I was absolutely sure this pdf would fail makes for the perhaps most compelling part, a t least for me as a language-nerd – In the language-department, thankfully the terrible idea that is the common tongue has not been slapped on poor Europe. Instead, we get 3 lingua franca and a vast array of different languages, all neatly categorized with alphabet, sample names etc. Even better, the at least in my games, never applied rule that everyone would be literate is not used – rather literacy is rare and something you have to work for (by investing at least a feat if you don’t belong to the literate classes like wizards etc.). This expansion of the linguistics-rule also comes with sample DC-modifier to verify and understand documents etc.

This painstaking level of detailed research is also applied to the respective geography and a vast list of Kingdoms, city-states etc. is provided along information on largest settlements, capitals, population, allies, enemies etc., making for an interesting interwoven tapestry of political alliances and potential adventures.

Sounds awesome and like a wholesale recommendation? Unfortunately, no, as there are some problems: I did mention the twelve gods and it is in this area the setting somewhat falls flat on its face: There are 12 gods and the fallen (old) gods as well as primordial, savage evil deities even older than the Fallen and a lot of the motivations/tensions are supposed to be results of an old/new-struggle, somewhat similar to the Scarred Lands of 3.5., but minus the cataclysms, deities walking the earth etc. – this is a rather low-magic setting, after all. The first problem I see is that anyone only half-versed in mythology realizes that just saying “Odin is the same god as Hermes, just in Germanic” does not work. At all. While I could live with Greek and Roman gods being the same, the transition to Germanic and Celtic gods does not work and the approximation falls flat on its face.

Even worse, though, is something you may have noticed by now: Christianity, Judaism, Islam – all the “big” religions in Europe are absent from this world – Were they as influential as the average religion in a fantasy setting, that would be one thing. Taking into account how these religions essentially provided the drive for the crusades, inquisition, political maneuvers, excommunicated kings etc., this is a problem. The whole social order of medieval Europe, the political landscape etc. – almost everything was influenced by the church, be it positively or negatively. The fact that these religions actually DID persecute and convert people of the old beliefs makes this decision baffling at best for me: The concept of old vs. new in religious history and Christianity’s replacement of the habits of old, their monastery structure etc. provided the driving fuel for not only religious, but also racial tensions and the different sub-sets of Christian beliefs also would have provided for ample, cool roleplaying opportunities. I mean, come on, even I as a die-hard atheist would LOVE to play a Catholic inquisitor rooting out vile cults! I gather that if I had a hardcore Christian in my group, he surely would enjoy kicking ass in the name of the Lord – after all, there are awesome quotes a plenty in the Good Book and why not showing off how cool religion can be in a friendly environment?

If you think I’m exaggerating, just think how our holidays impact our daily lives and consider how the whole social order, the whole calendar of people, their daily lives, revolved around these holy days. How the church was a place for research and training for people, a means to escape the rigid social hierarchy. Which is another problem: The class-system was quite rigid, imposing e.g. restrictions on the colors of dresses that were worn, most famously making e.g. purple exclusive for royalty or yellow the color of prostitutes. Marriages and power-bases were heavily influenced by one’s class and connections and there simply are no pieces of information given for that – shouldn’t e.g. Wizards be rather exclusive to the upper class? Making the learned arcanists tied to a class would make sorcerors and witches more interesting and would offer a dimension of class-struggle/conflict to the character classes, perhaps even with hunters. Unfortunately, though, the class-system is tied to racism, discrimination and, again, the church.

Editing and formatting are top-notch, I didn’t notice any glitches. Layout adheres to the 2-column standard and the b/w-artworks are nice. There are onyl 2 bookmarks here, which makes navigating the pdf harder than it ought to be.

On the plus-side, I really loved the information on languages and the web of intrigue that one can weave via the concisely presented statblocks of the individual kingdoms/states.

While I understand that these mature topics like discrimination, religious strife etc. have probably been consciously left out to avoid offending anyone, I maintain that this essentially breaks the campaign setting. At least it did for me. Not only does the omission eliminate perhaps one of the vastest potential resources for adventures imaginable, it also breaks my suspension of disbelief – I simply can’t picture a Europe that similar to ours sans these concepts. A courageous stand and a side-box that talks about handling these topics in a mature way could have made this setting plain awesome.

Instead, we get the 12 and the Fallen, which, while ok, are simply not compelling enough to make up for this loss – due to the limited amount of space available, they remain blasé and comparatively boring when seen in direct comparison. As a gazetteer, this pdf does an ok job, but not a great one – while there is a lot of information, there also are blank spaces galore in this book, which essentially make it impossible to concisely use the setting for one’s game and still make it feel like a unique take on our world rather than just another generic fantasy world. In the end, I see good research, but some unfortunate decisions that, like dominoes, create some inconsistencies the pdf can not close in the limi
ted amount of space available. If there ever is a campaign setting, I’ll be sure to check it out to see whether the my concerns have been addressed in more detail – the potential is immense. If you’re a history-nerd like yours truly and are as concerned about world consistency as I am, this pdf is not for and probably 1 star, in spite of the great linguistics section. If you’re set on playing in an alternate version of our world and are willing to invest some time into making the setting’s consistency work (or are easily offended by displays of religion etc) , this might be 3 stars for you. My final verdict will be 2 stars.

Kingdoms of Legend–World Guide is available from: