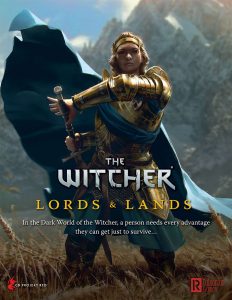 Okay, so, first things first: Since getting The Witcher RPG review done in time for the start of the Netflix show, and since I am pretty OCD, this review was moved up in my reviewing queue as well.

The screen is accompanied by the “Lords & Lands”-booklet – which clocks in at 16 pages, 1 page front cover, 1 page editorial, 1 page ToC, 1 page back cover, leaving us with 13 pages of content.

My review is based on the electronic version of this supplement – I don’t own the physical screen (since it is pretty expensive), and thus can’t comment on durability, material, etc.

All right, so, let’s start with the screen: On the first page, we have a list of actions you can take on the left-hand side; Default DCs and modifiers/light levels are included alongside ranges, damage locations and common cover tables.

The second page has all the information regarding healing, wounds and magical fumbles. The third page contains the rules for fixing broken gear…and also the basic guidelines for monsters per encounter, which struck me as odd. Currency conversion? Makes sense. The table for awarding I.P.? Less so, since it’s ultra generic anyways. The screen has a few peculiarities: For one, it sports several text blocks that are hard to parse in-game, and of dubious value regarding their information:

“By declaring a Fast Draw at the start of the round, you raise your initiative by +3 for that round by taking a -3 to your attack. However, you must make an attack and you cannot benefit from aiming or any other aim-related ability. If your weapon is not drawn, you may draw it as part of this action.”

You can’t tell me that you can’t present this information in a way that is easier to parse. That’s also a lot of real estate for a core rule.

Speaking of real estate: Know what’s not on the screen? A table that tells you what plants/critter parts, etc.contain Fulgur, Queberith, etc. Yes, this’d take up room – and there is none.

Know what we get instead of these actually useful things? An artwork on every page of the inside of the GM-screen.

I like artworks as much as the next guy, but these artworks are USELESS, and GM-screens are all about…UTILITY. Combine all artworks, and we have almost an entire (!!!) page of real estate LOST. That is a most puzzling, and imho rather bass-ackwards design decision.

Speaking of which: Puzzlingly, we begin the booklet with everyman NPC stats BEFORE we get the player-facing material – that makes no sense, and if you’re like me and prefer that players not have this information, it will annoy you to no end.

After this, we get the new halfling race, who receive +1 to Athletics, +2 to Wilderness Survival when calming, taming or controlling animals, and +5 to Resist Magic AND they may check to avoid mental control, even when this would usually not be allowed. Halflings can’t benefit from the positive effects of Witcher potions. They also enjoy near universal equality, and are even tolerated in the xenophobic North. Okay, does this mean halflings can see through e.g. Afan’s Mirror? Does it exclude them from using Vaults of Knowledge? I have no idea. In the absence of a proper descriptor in the base engine, this needs clarification. The write-up does not note how many siblings haflings are supposed to have; I assume human default, but it feels odd to me.

The booklet also features a new profession, the Noble, a profession that REALLY should have been in the core book. The noble’s defining signature skill is Notoriety, which is also added to the Reputation in their own and allied countries, half the value in hostile territories. I assume rounded down here, but the pdf doesn’t state as much. The skill tree includes gaining servants and an estate; really cool: There is a means to dabble in skills: If you invest in Dabble, you get two skill points in skills you have 0 ranks in, making them the jack-of-all-trades, if desired. One of the progressions of the skill tree focuses more on combat utility, on armored mounted combat, to be precise – so if you wanted to make a pompous knight from Toussaint? There you go.

But wait, estate? Yeah, there is a very basic one-page estate-building engine here, with 8 additions provided, ranging from barracks to greenhouse, etc. The estate is weird, in that it’ll be either overpowered, or nigh useless: If the party is moving a lot, it won’t matter as much – or at all, if the war engulfs it. What happens if an estate is lost? Can nobles be excommunicated by e.g. our friends of the flaming rose and lose their estate? Conversely, if nothing goes wrong and you play a gritty witcher game of survival, scrounging stuff together, etc., you get free resources without limits. The estate’s benefits should most assuredly have a cooldown or the like.

On the other hand, there are no costs to maintaining an estate, which make it feel somewhat cosmetic, like it’s generating materials ex nihilo. There are means to enhance locks to DC 18 and 20, but annoyingly, these do not further enhance the security for the torture chamber or secret room, if present – this can result, funnily enough, in the torture chamber having a worse lock than the rest of the estate. The low maximum DC here is also a bit lame. Where is the means to make a dungeon? A dimeritium-based magic-creature/mage-confinement cell? Where is the banquet hall that enhances the Host ability from another part of the skill tree? This is all so half-done, so opaque.

The final section of the book is probably the best – we get stats for flails, lamia, whips, etc, as well as 4 new alchemical items, which include berserker’s brew, celestine, cadaverine solution and summer ointment. From jars of leeches and masquerade masks to false coins, plague masks and vials of gut worms, we also get a couple of cool items regarding other gear – and yes, the weapons come with proper crafting diagram information, including costs for the diagrams.

Editing and formatting are very good on a formal level; on a rules-language level, I was less excited by what I found here. Layout adheres to the game’s two-column full-color standard, and the booklet sports two full-page full-color artworks, as well as a couple of smaller ones. The booklet comes fully bookmarked, in spite of its brevity.

Cody Pondsmith’s Witcher GM-screen and its associated booklet leave me in an odd place: I don’t think the GM-screen does a bad job, but neither does it do a good one. The amount of wasted space is strange, and the inclusion of these real-estate consuming textblocks of basic rules feels even stranger. The booklet suffers from the nonsensical decision of front-loading NPC-stats. I was not impressed by the halflings. The noble profession should have been in the core book, and the estate-running rules, sorry to say, are a joke – detailed estate rules could have easily filled a booklet of the entire size of this supplement. Easily.

This leaves me with only the NPCs and items to be excited about, which isn’t exactly a lot.

Don’t get me wrong, The Witcher RPG needed such an expansion – but it needed a proper one. Can you play Thronebreaker-like games with this? NO.

Does it have a robust “command your own units”-engine? NO. Does it have proper estate-rules? NO.

This is a flimsy, flimsy and somewhat half-hearted attempt at making estates and Nobles work in the game. If you handwave a lot of things, then this might work for you. It does not work for me. At all.

This is NOT per se a bad supplement, mind you – but it’s also not even close to being a good one. It doesn’t make me think I need the screen, and the booklet, as noted, failed to impress me.

All in all, my final verdict can’t exceed 2.5 stars, rounded down.

You can get this in pdf-form here on OBS!

You can get the print-version here on R. Talsorian games’ store!

Want to check out the Witcher RPG? You can find it here!