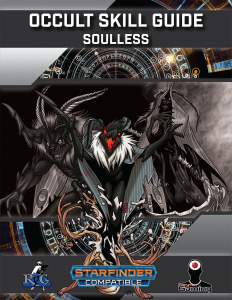 This installment of the Occult Skill Guide clocks in at 17 pages, 1 page front cover, 1 page editorial, 2 pages of SRD, leaving us with 13 pages of content, so let’s take a look!

Okay, so the concept of the Soulless was first introduced at the very end of the run of the mini-series for PFRPG, but this is NOT a simple rehash/conversion of that file. Oh now. This is more.

We begin on the introductory page with a neat summoning graft for calling the soulless, which changes the type to outsider, nets see in darkness and darkvision 60 ft, incorporeal,, immunity to mind-affecting effects, and the gloom and flatten abilities – more on those below. Since incorporeal is so powerful in SFRPG, the creature loses DR, if it has DR. The creature adds Stealth skill-wise, and the creature’s natural attacks deal half kinetic damage (type of your choice from the physical damage types), and half sonic damage. It also nets blindsight 60 ft. (souls). The pdf also precisely codifies the soulless subtype graft.

Anyhow, instead of beginning with stats, we get a proper soulless corruption, and yes, the corruption rules are explained if you’re new to them! The corruption’s associated save is Will, the ability score is Charisma. You can catch this corruption from a soulless’s consumption ability, from being overwhelmed by base emotions (Hello, anime trope! Nice!), or from meddling with the dark powers lurking in thein the Byways.

As for the latent stage, anytime the victim experiences a base emotion, they gain one corruption point, plus an additional one for every 10 minutes they experience that emotion. For victims using an ability that causes the victim to experience these, the tally is increased to 1d6. Manifestations of the corruption are exempt. If you’re wondering: The save starts at 13 + half victim’s level +1 per saving throw attempted since last stage entered, with each stage increasing the base DC by 2. At the latent stage, embracing virtuous emotions truly cures some corruption points – so yeah, curing is fully contingent on nuanced roleplaying! Nice!

At the latent stage, the character gets the soul consumption manifestation: When you attempt an ability or skill check, save or attack roll, you can accept a number of corruption points of up to 1 + your corruption stage. Anyhow, when you do choose for this bonus, you gain an increasing die size of corruption points, with die-size resetting each day. I love this ability; it appeals to the edgelord antihero-liking guy that’s not really hidden deep within ole’ me.

At stage 1, the character can now be detected as an afflicted by the proper targets, and gets the call the soulless manifestation: You can summon creature for 1d10 corruption points, with the critters having the soulless summoning graft. The spell level is equal to 1 + 1 spell level for every 3 level or HD, maximum 6th. This SP is at-will., but recasting it makes the previously summoned critters vanish, so no spamming. Nice!

At stage 2, you count as both your original type and as an outsider with the gloom subtype, whichever is more detrimental, and you get the Gloom Anatomy, which makes your attacks count as magic and having the ghost killer weapon fusion, here called infusion. At stage 3, whenever you’re subjected to a critical hit, you get to roll a flat 1d20 against DC 10 – on a success, you ignore the attack’s critical effects; if you succeed by 5 or more, you only take normal damage! In the endstage, you turn into TWO monsters – the soulless, moth-like thing, and the undead soulshell; if properly destroyed, these can be recombined…sounds like a great quest to me!

After this, we essentially get a full mini-bestiary of the soulless: At CR 3, we have the soulless gloom, which can flatten itself into a 2-dimensional shadow; the build uses the combat array and is correct. The CR 5 gloomball is made via spellcaster array, and pure amazing, easily one of my favorite artworks by Jacob Blackmon ever – the critter has a bloated head that reminded me of Majora’s Mask, and it can shrivel and suddenly expand in a super effective and pretty nasty attack – extra bonus points if you combine that with a creepy sound-effect at your table…

The CR 10 Syngloom can flatten itself, but still attack while flattened, and attempt to paralyze foes while flattened…oh, and trick attacks… The CR 13 Gloomigre is pretty awesome, as it had pretty nasty incorporeal armaments that can switch damage types and critical effects, cause bleed, and they can shadow step; they can use their Resolve to plunge their armaments into the ground to make a devastating AoE-attack…awesome.

One of the most brutal SFRPG-creatures I’ve seen so far: The CR 15 gloomtide, which is an amalgamation of corrupted souls, behaving as a swarm: Every attack makes them spawn tiny glooms, which they can attack and reabsorb – they are vulnerable versus magic, and you better use that…with incorporeal and swarm defenses, as well as whirlwind, these are brutal.

More brutish would be the CR 16 Gloomhemoth – obviously inspired by the classic Final Fantasy creature, including the option to switch between upright and bestial gait. They can use Resolve to leave magical darkness, summon copies of themselves – and these copies may be detonated! They can eat darkness to buff themselves as well. Epic, deadly, awesome.

The gloomtitan, at CR 18 reminded me of another awesome critter from my favorite JRPGs…can you guess which? Well, they get a massive gravity aura, and can use Resolve to draw those in the aura closer. They can also shatter a titanic sphere of soul energy atop their heads, raining soul-seeking missiles. They can crush the souls of those grappled, swallow targets whole and shear off sections of the target’s souls.

That’s not all. Finally, there is the Gloombringer, at CR 20 – who was obviously inspired by Persona’s Reavers; they can generate blasts of elemental magic in cones, lines or spheres, and they can sue their spellslots to bolster these effects;  in their vicinity, stabilizing is difficult and may result in the victim’s soul being extracted, and these beings can spend Resolve to cast any 5th level or lower mystic spell. BRUTAL. Love it!

Editing and formatting re very good on a formal and rules-language level; layout adheres to the series’ two-column full-color standard. The module sports full-color artworks for each of the soulless, and they are awesome – some of my favorite monster-drawings from Jacob Blackmon so far. The pdf comes fully bookmarked at your convenience.

Alexander Augunas’ Soulless not only offer a fantastic new corruption, they are also some of the most awesome monster-builds I’ve seen for SFRPG so far; each of them is somewhat unique, meticulously-crafted, and deadly – the supplement is absolutely awesome. 5 stars + seal of approval, and for builds like the soulless behemoth-thing, this gets a nomination for my Top Ten of 2019. Get this!

You can get this amazing little bestiary and its cool corruption here on OBS!

If you love this pdf as much as I do, please consider supporting the Advanced Occult Guide kickstarter – it has only slightly more than 50 hours to go, and designs like this? They should be rewarded! We need more soulless! You can check out the kickstarter here!

Alex is also designing his own RPG – Eversaga! What I’ve seen so far is freaking amazing, so if you’re inclined to show support, or are curious about it, consider supporting him here!

If you consider my reviews to be helpful, please consider leaving a donation, or joining my patreon here. Thank you!