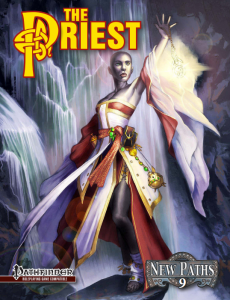 This installment of the New Paths-series clocks in at 12 pages, 1 page front cover, 1 page editorial, 1 page advertisement, 2/3 of a page SRD, leaving us with 8 1/3 pages of content, so let’s take a look!

The priest class receives d6 HD, 4 + Int skills per level and gets 1/2 BAB-progression, good Will-saves and proficiency in only simple weapons. The class begins play with an aura as per the cleric’s default and bonus languages include the respective languages of the alignment-related outer planes. Similarly, the restrictions we know regarding opposed alignment spells still apply. A priest draws her spells from the cleric spell list and must prepare them in advance; however, they are not expended upon being cast, instead consuming a spell slot available. The governing spellcasting attribute for the priest would be Wisdom and the priest begins with 1 + 1 spells of first level prepared, +4 orisons. Obviously, as a full caster, she progresses to learn up to 9th level spells and the maximum spells per day per spell level clock in at unmodified 4, with prepared spells capping at 4 + 2 per spell level.

The pluses in the list refer obviously to the domain spells; a priest selects 3 domains from her deity and she gains all domain powers of the chosen domains. The priest’s spellcasting is also tied to her holy symbol, with which she shares a sacred bond – much like an arcane bond, casting without it becomes problematic, but here’s the kicker: The priest may use the holy (or unholy) symbol to cast cure or inflict spells as though they had a range of close instead of touch – which is a huge boon. Back in 3.X literally EVERY cleric in my games had the feat to do just that.

Also at first level, the priest receives a so-called divine gift that can be used 1/day as a swift action. 10 such gifts are provided and all are available – you don’t have to choose. The priest may use the ability, as mentioned, 1/day, but may use it +1/day for every 3 levels beyond first. If a gift enhances a spell, it may only enhance cleric spells and only one gift may enhance each spell. The gifts include CL and DC-increases of the next spell cast, invisibility (that scales up to greater invisibility at 7th level), metamagic enhancements, immediate action rerolls, wings at 5th level, Ac and save bonuses with DR and SR or bursts of raw, divine power…or, well, spell-swapping.

The priest also receives access to channel energy at 2nd level, though it is governed by Wisdom for the class and 7th level decreases activation action to move, 14th to swift. Personally, I think the ability should have a catch here to prevent the priest from executing multiple channel energy uses per round – in spite of the limitations in daily uses, three channels in one round can be pretty devastating. 6th level and every 6 levels thereafter net a bonus feat from a nice selection and, as a capstone, the class becomes immune to death attacks and negative levels and may never reduced below 1 in any ability score. Additionally, she remains alive until 2 x negative Constitution score.

The pdf provides two feats: +1/day divine gift use and the option to channel energy as a full-round action, but instead roll d10s, but at the cost of being fatigues for a number of rounds equal to the channel dice rolled. I LOVE the visuals of this feat!

We also receive a brief archetype, the chosen of nature: These guys get an expanded class skills list(but oddly lose none) and draw their spells from the druid list instead of the cleric’s. The archetype replaces the channel energy progression beyond 6th level with progressively better beast shape and plant shape SPs. Decent, but honestly, not that cool – the archetype feels a bit like an afterthought.

Editing and formatting are top-notch, I noticed no glitches. Layout adheres to a beautiful 2-column full-color standard and the pdf features gorgeous full-color artworks. The pdf comes fully bookmarked for your convenience.

Marc Radle’s priest addresses a very crucial need I always felt: The need for a divine adherent that feels like a caster. I mean, when you think about agents of the divine in the context of our world, you probably won’t think of mace-wielding, armor-clad quasi-crusaders. You’ll think about men and women of the cloth. The priest fills this niche rather well. Divine gift also represents a cool mechanic, though frankly, I would have loved to see the whole thing go one step further; divine spells never really felt that “divine” to me and while the priest does a great job of emphasizing this component, I think the engine could carry more.

But I am rambling. Frankly, I feel that this should be the base class, with the more martially inclined cleric being something of a specialist. In my games, most clerics tend to not be too martially inclined (except when adventuring or when the background/deity fits), so the priest is guaranteed to see a lot of use. The divine gifts and at range cure/inflict casting also make for great balancing tools to offset the loss of the decent 2nd-line fighting options of the cleric. In short: I really, really like the class. Deceptively simple, fun and elegant. Similarly, the feat provided is nice and while I think channel spamming should be prevented with a cap, that operation’s pretty simple to perform. The one thing that left me somewhat disinterested herein would be the archetype, perhaps the space would have been better served with FCOs. Oh well, this is certainly a cool class for the fair asking price – my final verdict will clock in at 5 stars.