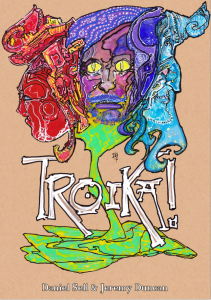 This rules-lite RPG clocks in at 50 pages if you take away the front cover, TOC, and introduction; a simple character sheet is included in the deal. My review of this RPG system is based on the softcover print version, which is 6’’ by 9’’ (A5) in size. The cover of my print edition could be considered to be NSFW by particularly conservative standards, so please beware below – the review does sport a photo of the print copy below.

Now, while this RPG has been released by Melsonian Arts Council, it is not necessarily one we’d associate with classic OSR gaming in all but the most extensive of ways. Much like “Into the Odd” and similar games, we do deviate from the classic 6-attribute set-up, though Troika! Deviates imho even further from the classic set-up. While I have thus tagged this as “OSR” due to its aesthetics, it should be considered to be its own beast.

Instead, you only use d6s. Regarding dice notation, d666, for example, would mean rolling 3 dice in sequence and then adding the results together: Rolling a 3 on the first d6, a 2 on the second and a 5 on the last would mean you’d consult entry 325. Most checks will be done using 2d6, which you use to try to roll under or against a target value. The latter is known as “roll vs.” in the system.

Character generation is swift and painless: You roll d3 +3 to determine Skill- Skill behaves as a kind of proficiency bonus – you add it to all skills you have.

Then, you roll 2d6 +12 – this is your Stamina. Stamina is your hit points. If it’s reduced to 0 and your turn would come up or a turn ends, you die. Going to negative Stamina kills you instantly. Resting for 8 hours lets you regain 2d6 Stamina, and you can eat provisions to regain d6 Stamina, but only 3/day, so.

The third important value would be Luck. You roll d6 +6 to determine your Luck. When the GM calls for the “testing of luck”, you attempt to roll under the current luck score. Regardless of whether the test was successful, you reduce the current Luck score by 1. You may always choose to NOT test your luck, which is an interesting angle here. Resting for 8 hours lets you regain 2d6 Luck, to never exceed the starting maximum. Finally, if you have a tie in combat, you can test your Luck – on a success, you break the tie by adding +2 to your value.

And that is basically already the core chassis of the engine, though combat does work in a pretty radically different and interesting way: During combat or in situations where determining sequence of action is important, you assemble a bag: You take a container, put an assortment of differently colored dices, chits, coins or similar markers inside; all enemies share one color, a player is assigned a color, and there will be a final token of a distinct color that marks the end of the round. The GM will then proceed to blindly draw a chit/die/marker from the container, its color determining who gets to act. After acting, the token is removed. Once the end of the round token is drawn, all tokens are put back in the bag. Magic, poison, etc. is resolved at the end of the round. As you can glean, this makes combat a pretty risky and chaotic endeavor – while you only rarely will be doing nothing due to the tendency to roll versus as a response to attacks, combat as such turns out to be fast and lethal. It also manages to feel pretty differently from similar rules lite systems. One of my didactic concerns here would be that it’d have been nice to explicitly state how many chits a PC gets in the summary of initiative rules.

There is a card-based initiative alternative available, but I do not own the cards, so I can’t comment on them. You can find them here.

Now, the pdf does codify pretty tightly how combat actions work, what’s possible, etc., and delaying has you put your chit back in the bag, so it’s much less reliable than in comparable systems. Ranged attacks are opposed by shield or dodging, melee attacks by other melee attacks; ties mean that neither managed to hit the other in the case of melee attacks. Moving more than 12 feet takes up an action, and shooting into melee has all targets associate random numbers and determine who’s hit; casting spells requires Stamina expenditure. Interesting: In order to draw an item in combat, you have to roll equal to or higher than its position in your sheet, making item retrieval chaotic. Double 1s are failures and may force rolling on the “Oops”-chart of the spellcasting system; Double 6s on damage basically constitute critical hits, here called “mighty blows”, dealing double damage. Opposed mighty blows are noted.

Cover makes it harder to hit, shields impose a penalty to hit. Armor imposes a penalty on the damage incurred, but does take up item slots. I already mentioned these – you can only carry up to 12 items. Large items take up 2 slots, and carrying more than that imposes massive penalties. Now, damage is chaotic: You roll 1d6 and compare it plus its bonuses/penalties with a table; heavy percussive weapons can ignore 1 point of armor. As a whole, this makes the defense of characters mostly up to their attacking skill.

But how do you roll that? Well, it’s 2d6 + your Skill value, + advanced skills, if any. What’s that? Well, that’s what most folks will picture when reading “skills” – from sword-fighting to Stealth, to Strength, to Astrology, Blacksmithing, etc., this aspect of the system is very wide open – though thankfully, the core array of skills is codified: You will know, for example, that Run and Ride are different advanced skills.

How are advanced skills determined? Well, they are determined by the Background you choose. A d66-table if provided, and these basically represent both your race and class: You could end up as a member of the society of porters and basin fillers, as a rhino man, a poorly-made dwarf, a monkey monger, a parchment witch…or something more mundane. What’s a parchment witch, you ask? Well it’s one of the things that make Troika! shine beyond the basics. Littered throughout this gaming supplement, you’ll have tantalizing, deliberately obscure hints at an implicit setting that truly did capture my interest. Parchment witches, just fyi, would be undead that can’t give up on splendorous living, thus coating themselves in perfect paper skin. Rain and flame and not popular among them…And yes, several of these backgrounds do actually sport additional rules beyond the list of advanced skill values and possessions. The book also provides some guidance to make your own backgrounds. If you do want to play a renegade rhino man golden barge pilot, that ought to be possible, for example.

This does also extend to the sample spells noted: the classic sentry-spell, for example, has the wizard pluck out a piece of his mind and is risky: It distracts the caster and destroying the smidgeon of the caster’s mind can cause a nasty shock. If you cast “Zed”, you disappear, never to be seen again. Magic is just as odd and weird as the plethora of backgrounds, and the booklet does include a brief selection of sample items as well as a mini-bestiary. Each of the monster entries does come with a d6-based generator to determine the target creature’s mien. The list here is more conservative than I expected to see from the book, but e.g. goblins as vanguard of labyrinth-creation civilization, dull and fat lizardmen are nice tweaks. I also loved to learn that manticores are bibliophiles, and a sympathy snake crawling up your leg may make you despair at the awfulness of life. Totally okay to let go, as the predator mourns with you your demise in their jaws.

Advancement is simple, fyi: Upon using a skill successfully for the first time, you add a tick next to it; upon resting, you roll 2d6 and try to beat your current skill-level. On a success, you increase the skill by one, but you may only do so for up to 3 per rest; after a rest, you delete all ticks made. Improving past 12 requires rolling another 12 to improve by one point.

Editing and formatting are very good on a formal and rules-language level. Layout adheres to a no-frills two-column b/w-standard and the booklet does come with quite a few amazing and weird artworks by Jeremy Duncan. The softcover is a saddle-stitched softcover with solid production values regarding the paper thickness.

This is how my print copy looks: 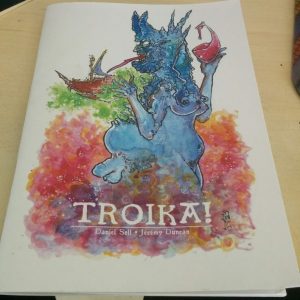 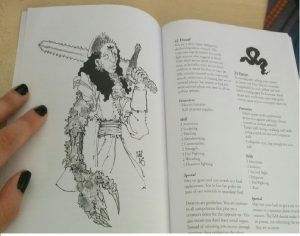 Daniel Sell’s Troika! game is deliberately vague and tantalizing, and some may call it “unfinished” – that would not be truly the case, though. Instead, it provides just enough to jumpstart your imagination with its oddities and peculiarities. The system is simple and elegant, though it can become very deadly very fast; defensive options are less potent, and eating a mighty blow can pretty much end PCs quick; similarly, bad luck in the initiative system can be lethal. This is a swingy system by design.

That being said, the game does level out pretty fast: Even veterans can and will die, so if you’re looking for long-term campaign play and pronounced character-attachment, then this may not be for you. However, if you are looking for an easy to pick up, weird, and often inspiring little system that plays differently from all other OSR-systems out there, that feels both old-school and fresh…then this is definitely worth checking out.

My final verdict will clock in at 4.5 stars, rounded up due to in dubio pro reo.

There is currently a Kickstarter for the next edition in its final hours – it’s fully funded! You can check it out here!

You can get this system right here on OBS!

Wanna check out the FREE, artless version? You can find it here!

Want to get the initiative cards? You can find them here!