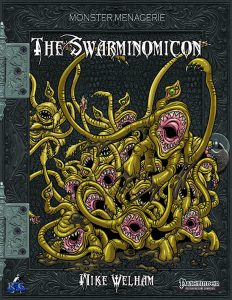 This deluxe-sized installment of the Monster Menagerie-series clocks in at 56 pages, 1 page front cover, 1 page editorial/ToC, 1 page introduction, 3 pages of SRD, 1 page back cover, leaving us with 49 pages of content, so let’s take a look!

Unlike many similar supplements, this book offers some supplemental material employed in the builds, so it makes sense to mention them before getting into the details of the monsters herein. We have a total of 8 different feats: Dispersing Evasion provides the option to fully negate area spell or effect tricks, but requires a full-round action to reassemble on the following round. Swarming Flyby Attack is pretty self-explanatory. Swarming Vital Strike is interesting, as you may determine a single target, doubling swarm attack damage versus the target, not including bonus energy damage etc. The Improved version upgrades that to triple, the Greater version to quadruple; Prerequisites make sense. Swarm Crusher lets you inflict 75% of damage when attacking swarms of Tiny creatures with slashing or piercing weapons; 25% if smaller. The Improved follow-up feat upgrades that to 100% for Tiny creature swarms, 50% versus swarms of Diminutive creatures, 25% versus swarms of Fine creatures. Swarm Spread, finally, lets a swarm use a swift action to expand reach, at the cost of a temporary swarm damage and DC reduction.

The pdf also contains spells pertaining swarms – summon swarm I is a 2nd level spell, with the upgrades going up to VII. Compress swarm makes the swarm fill the space between creatures, decreasing space, but providing increased damage and DC. Swarm malady adds poison to swarms and swarm wall, well, makes a wall of a swarm. Cool!

Now, as many of you know, I love swarms – swarms and troops are something you’d encounter in pretty much any PF-campaign I’m running. The tactics they require and the concepts are something I enjoy. The swarms herein range from CR ¼ to CR 20, which means that pretty much any group is likely to find some material here…but does it hold up? Well, we begin with the Assassin Swarm (CR 18), who gets massive sneak attack versus targets…and yes, these assassin bugs, specifically bred as killers by nasty druids, do get killing attacks…ouch! Know what happens when you attempt to create a male penanggalen? Something delightfully icky…the CR 7 bowel swarm that can attempt to replace the organs of its victims. See, in a lesser book, this would just be a necromancer’s experiment, but here, the contextualization adds another dimension – surprising what you can do with a bit of flavor. This is not the only creepy swarm herein, mind you: The CR 9 ghost swarm can proclaim utterances of doom and ride along within hapless victims; the Cr 6 gibberings warm makes for a cool idea for a phase two form of a mouther –based boss. Really spooky at CR 12: The shapechanging morphic swarm is an excellent hunter and utterly weird. At CR 20, pestilence swarms are things that herald the end of the world if they’re not stopped…good luck with that. Minor complaint here: The swarm employs unholy damage, which RAW does not exist in PFRPG. What about phalanges (CR 14), swarms of hands, still cognizant of arcane energies, now focus on spells…yeah, that should be a nasty wake-up call when the PCs expect wimpy crawling claws and get hit by hand-spells… The Cr 4 gloom swarm, with its light-dimming, can make for a surprisingly nasty foe in conjunction with the undead.

Beyond these, we get the CR 5 caltrop swarm – and, much like all construct-swarms herein, we get creation notes for the swarm. It should also be noted that such construct-like swarms include the innocuous ability, which allows such swarms to remain inconspicuous. It should also be noted that both caltrop swarm and chainlink swarm (CR 6) come with variants for further customization, something that btw. also applies to the CR 7 wire swarm and the shard swarm at the same CR. Sans variant, but no less cool, would be the filament swarm, result of an attempt to create monofilament weapons with magic. Also somewhat in line with potentially science-fantasy aesthetics would be the gravitic swarm (CR 11) that can exert control over gravity for potentially really nasty surprises for PCs…and players! The CR 13 glyph swarm would be a more far-out magical construct – susceptible to erase, capable of cannibalizing symbols and capable of using them quickly and in a deadly manner. Really cool one! What about sentient and usually lawful ki swarms, which sprang to life from ki-infused training materials, roaming the land in search for worthy adversaries? Yeah, that is damn cool. Players will hate the metal-consuming CR 13 adamantine mote swarm. Have I mentioned the CR 14 portal swarm that can teleport parts of you away, thus ignoring DR etc.? Of course, the regimented swarm at CR 12, creature of law and chosen foe of chaos, makes for another cool critter. We can also encounter good or evil toy soldier swarms (CR 5). The CR 8 spikeleaf swarm is a nice plant creature, though, in direct comparison to some of the creatures from the Deadly Gardens-series, it is a bit straightforward. Same goes, to an extent, for the tangelweed swarm at CR 3, though the low CR does make this one interesting and a valuable addition to the GM’s arsenal.

Are you looking for something more down to earth? What about the CR 2 electric eel swarm? The CR ½ firefly swarm? Or the incredibly adorable CR ¼ puppy swarm? Yeah, the “Adorable” is an actual thing here! Scum swarms would be aquatic, plant-based sludge and there is a CR 2 resin swarm that can attempt to encase targets in amber, entangling them first and then trying to suffocate them. There obviously also are creatures herein that can be classified as distinctly magical, steeped in the creature-contexts of the system. Take e.g. the CR 6 wisp swarm, air elemental wisps that can 1/day stun targets or choke its victims. Or what about the symbiotic ferromites (CR 5) that can inhabit rust monsters? Yeah, that is one damn cool idea! The CR 9 grifter imp swarm can steal a ton of items at once; At Cr 8 ice crystal swarms generate a biting cold and may even erect ice walls. The creatures on the cover? That would be the protoyughs, adding a cool component to the life-cycle of the otyugh. Some creatures that die spawn vengeance swarms (CR 15) instead of channeling their spite into becoming undead, a strategy that also is a favorite of hags, just fyi. There also would be a CR 11 flesh-dissolving ooze swarm…and what about the CR 12 entropy swarm, which has potent defenses (non-illusion 50% miss chance), starflight and may dissolve limbs? Oh YEAH! On the lower end of the CR-spectrum, the fatigue swarm (CR 4) can make for a great accomplice for sleep/dream-themed foes and represents an uncommon undead.

On the more whimsical (but no less deadly) side, we also sport fey, like the chordic swarm – music notes turned sentient, with discordant abilities to hamper foes and the ability to buff allies. At CR, the needle drake swarm, with its persistent cloud of stingers, is an intriguing twist on the concept of dragons and a light-based scintillating sprite swarm finally covers all basics you could want. My two favorites herein, though, would be the CR 14 swarmic infiltrator, the evolved form of the morphic swarm, a deadly, intelligent foe that can coalesce into humanoid shapes…and an utterly frightening monster. The temporal swarm, out of sync with time and studded with uncommon abilities would finally be another gem I will definitely use.

Editing and formatting are very good on a formal and rules-language level: While I noticed minor hiccups in both departments (missing blank spaces, etc.), they are relatively few and far in-between. Layout adheres to the Grimoire-style 2-column full-color standard of Rogue Genius Games more recent books, making the pdf aesthetically pleasing, but also not particularly printer-friendly. The pdf sports several nice full-color artworks in Jacob Blackmon’s signature style. If you absolutely want an artwork for every creature, you may be slightly disappointed – most of the swarms come sans artwork. The pdf comes with non-nested, but very detailed bookmarks to the individual creatures.

Mike Welham is one of the authors who only very rarely disappoints me; his name on any given supplement is usually a very good indicator that I’ll enjoy what’s inside and this hold true here as well. The critters herein sport a variety of unique signature abilities that set them apart, many of which doe mechanically interesting things, often in creative ways I haven’t seen before. So yeah, the mechanics skill is there. While I did not reverse-engineer all critters herein, I did pick apart some and noticed no glaring issues in that department.

Beyond that, the skills of the seasoned monster author do show: Animal swarms feel like animals; constructs are geared towards functionality when intended as such; leitmotifs are maintained and in the brief paragraphs of flavor text for the creatures, we often add an imaginative and creative context for the creature, placing it in the fantasy worlds we explore. These may be small components, but they do serve to enhance the critters beyond what they would have been in the hands of a lesser author. These subtle extra flourishes are what makes you come up with ideas on how to use and place these monsters, in the cases where a dry statblock alone wouldn’t have sufficed.

In short: After the excellent installment on troops, the series’ deluxe-sized swarm-tome delivers big time. It may not be 100% perfect, but it is a very, very strong book, one very much worth getting, as the amazing components vastly outshine in both quality and quantity the few minor glitches. My final verdict will clock in at 5 stars + seal of approval.

You can get this great monster-book here on OBS!

(If you missed the great Troop-book by Jacob W. Michaels, you can find that one here on OBS!)