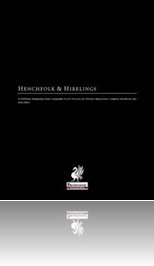 The pdf kicks off with a one-page discussion on why this book exists, namely a significant dissatisfaction with the leadership mechanics and its problems. I’m sure we all experienced the unfortunate problem of cohorts simply not living up to being essential parts of a given roleplaying group and dying too easily/being just another set of (bad) stats. This pdf seeks to remedy that by providing a whopping 100 henchfolk and hirelings for your perusal. For ease of navigation, we also get a two-page table of the henchfolk to be acquired by the PCs sorted by alignment, with details on their classes and the respective pages as well as a two-page list by class as well as another one that presents the henchfolk by race. The alignments of the henchfolk covered are LG, NG,CG, LN, N, CN and LE, offering no cohorts for the NE and CE alignments. While I can understand the reasoning for not adding them as well and making e.g. one of the CN or N guys and gals evil is not hard, I’d love to see a sequel devoted to insane and/or depraved cohorts for NPCs/ evil parties.

The first rules presented cover the acquisition of new hirelings & henchfolk depending on the size of the town in which the PCs recruit as well as a d100-table to randomly determine applicants. The rules are simple, concise and easily implemented. Even better, they can not only be used for PFRPG, but for almost any fantasy-based roleplaying game. This is not where the rules stop, though: From easily used (Diplomacy-based) job interview with the hireling to be, to quick and easy rules for the hireling’s upkeep, careful consideration is given to balance the additional support they offer for a party with costs, ensuring that the PCs don’t simply amass a small army.

On to the hirelings, then: They are presented by race, starting off with 8 dwarven NPCs. While no full stat-blocks are given for the respective NPCs, they do come with alignment-information, basic ability-scores and their base class. More importantly, though, they all get the Raging Swan NPC-treatment, i.e. short information on appearance, background, personality and mannerisms are given. Each and every NPC within this book gets this treatment.

My favorite dwarven hireling would be the clam, level-headed and kind, yet extremely unpleasant-smelling Torgal Helkrak, called “The Oyugh”, whose Cha-score of 6 is explained via his lacking hygiene and conceals a kind, gentle heart. Among the 8 elven NPCs, my personal favorite would be the stark, raving mad Cydul Nailo, who is convinced that all that stands between him and the whisperings of the dread dragon in the sky is his trusted, dented helmet. If you can’t come up with some cool ideas resulting from this delusion (or is it one?), I don’t know what might spark your imagination.

Within the Gnomish ethnicity, none stood as much out as among the first two racial groups, though the almost pixie-like, hyperactive and kind cleric Ellywick Foler with her pet chipmunk makes for a cool little cohort who is ure to be endeared to the PCs if handled right. All the better when the DM wants to kill off a treasured associate to avoid TPKing the party…

Among the 8 halfling henchfolk, the hedonistic, yet friendly Garrett Greenbottle (a sorceror of the fey-bloodline) caught my interest as well as the rogue Osborn “Ossie” Tealeaf, the latter for reasons I can’t disclose here, with players reading this.

The 8 half-elven hirelings presented herein make for interesting companions, with Ilonal, a femme fatale cleric of the god of love ranking as my favorite, but while none fall into the dread emo-Tanis-trope, none really had me excited either.

The most interesting ethnicity with regards to hirelings, at least for me, would be the half-orcs, as they are hard to portray as anything but the cardbox-cut out tropes in the few lines available for each individual. A very cool character is the shoddy make-up wearing, female cleric of the god of beauty and love who was reincarnated into a half-orc by a druid. Formerly, Gerbo Nackle was a dashing male gnome – cool idea and makes for a lot of cool developments. The intellectual diviner Farnsley Thaddeus Biddle is another prime example for good character writing. I do have a gripe here, though: There are two half-orcs named Feng, one who is just called “Feng” and “Feng the Fang” – It would have been easy to rename one of them, why go with the ambiguity?

The vast majority (52 if I haven’t miscounted) of the new henchfolk belong to the race of humans. Unfortunately, once again the name-conventions are a bit lazy: We get 2 Digorys, two Alans, two Cajas, 2 Kenver and one Kenvern, 2 Kittos, 2 Petroks, 2 Rosens, 2 Sowenas – that a lot of duplicate names. While we all know the frequency of some names is higher than others, players often have a hard time enough to remember all the names (at least in my campaign that holds true!) that we don’t necessarily need names that are all the same. Yes, most have at least a different surname, but unique names would have made for nice bonuses, especially given the fact that you can always take an existing name and apply it to an additional character. This minor problem of repeatedly-used names is, though, the only truly negative thing I can say about the wide plethora of characters found herein.

Editing and formatting are good, while I didn’t notice any typos, double sentences or the like, I did notice some minor punctuation errors as well as a superfluous tab-blank in one of the tables, glitches that could have easily been caught by another pass at editing/formatting. Layout adheres to the classic, two-column Raging Swan standard and the b/w-artwork is nice, though (quite understandably) we don’t get artworks for all the cohorts. The pdf is extensively bookmarked and we also get a second version optimized for use with e-readers. There being no statblocks per se, but only fluff with general attributes, usability of this pdf is not restricted to PFRPG, but could easily be adapted to just about any fantasy rpg. This being a crunch-light book, I’ll rate it on the fluff and how the attributes of the respective characters are reflected in the flavour-text describing them. Interestingly enough, the amount of options of e.g. reasons for a low charisma are very high and, to be honest, none of the characters herein felt truly generic or like a walking trope. With the half-orc Krusk we even get a nice “metagamey” nod towards an iconic of yonder days of 3.X and, as you may have gathered from my favourites, some truly far-out individuals are among the hirelings. Rest assured, though, that more mundane people and even old and venerable characters can be found among the hirelings, offering for a nice and diverse set of individuals. I do have some points of criticism, though: Neither the APG, UM or UC are directly supported by these characters and while it is easy enough to make particular sorcerers or druids witches, it would have been nice nevertheless to at least have bracketed information à la “If you use the APG, substitute class XYZ for base-class ZYX” – in my opinion this would have enhanced the already very broad versatility of this book. Indeed, this book not offers a sufficient array of NPCs to serve as ideal backdrops for e.g. Kingmaker-campaigns or similar NPC-heavy campaigns, but could inspire whole campaign-arcs via the hooks for all the characters herein. Not all is perfect, though: The aforementioned name-issue is even more evident when e.g. considering Myghal, a monk hireling whose name is the exactly same as the one of a monkish villain from Villains I. An easily avoidable repetition. Another extremely minor gripe I have is the lack of one of the nice rhyming stances that feature prominently in almost all recent RSP publications. While none of my gripes per se are enough to detract a whole star, the accumulation of them makes it unfortunately impossible for me to rate this pdf the 5 stars its content would usually receive from me. While not enough to detract a star, this pdf still gets a final verdict of 4.5 stars, rounded down to 4 until at least the name issue or the glitches have been taken care of. Don’t be fooled, though: There is scarcely such an easily usable pdf out there and the value you get for your money is astonishing, making this one of the most expedient files to have as a GM. If you’re DMing for a fantasy setting, any one really, be sure to check this out. You won’t regret it. I hope there will be sequels.

Henchfolk & Hirelings is available from: