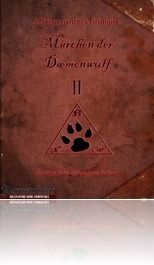 This pdf from Necromancers of the Northwest is 39 pages long, 1 page front cover, 1 page editorial, 1 page final artwork, 1 page SRD, 1 page advertisement, 1 page back cover, leaving 33 pages of content, so let’s check out this supplemental material for the lycaonite base-class from this pdf’s predecessor.

After a nice 2-page short story that serves as an introduction to the subject matter at hand, we get an array of 50 werewolf feats.

A new chain of feats details with Alpha Gazes – essentially, you can intimidate foes a limited amount of times per day to assert your dominance. The chain expands upon this mechanic, adding blindness, Wis-damage etc. to the palate, while balancing the significant benefits with penalties when you fail to cow your foe into obedience. Deadly Gaze, though, is utterly op and violates PFRPG design – on a failed save, the recipient falls to -1 Hp. Regardless of the hit points. Dragonslayers like Harm have been nerfed/eliminated for a good reason.

I have no such complain with regards to the plethora of “Howl”-feats, which expand upon the Howl of the Night Hunter-feat and expands the howls to do damage, shatter objects, deafen, demoralize, etc. Nice feat-chain! It’s interesting to note that Deadly Howl, the culmination of the chain, adheres to PFRPG-design standard by dealing 10 damage per HD on a failed save instead of a insta-death attack.

I did like the “Feral X”-feats, which grant bonuses when in hybrid form, ranging from being able to squeeze through tight spots to being tougher than usual. Hunter’s Stealth for example, is overpowered, though: The feat makes it possible to use stealth while running and adds +20 to Perception and Survival checks to track you. that’s not a feat, that’s a game-breaking disaster that should not be in the hands of PCs.

Unfortunately, this feat does not remain the only one any sane DM cannot help but consider broken – hybrid fury for example has the potential to add ridiculous amounts of attacks to your roster and, combined with other ones, can utterly BREAK any resemblance of balance and crush it into tiny bits. Add to that the expanded options available to improve your natural attacks and we’re in for an engine of destruction that should really have seen some playtesting in non-optimized groups.

Several of the feats from the original “Märchen der Daemonwulf” have been updated with clearer wordings, which I consider good service, though I think that they would have been better suited for an update of the original file. Oh well, including them in the sequel works as well, I guess.

Next up is a Lycaonite-10-level-PrC, the Pack Master. The PrC gets full BAB, medium fort and ref saves, 2+ Int skills per level and d10. The Class focuses on, grab your seats, gather a pack of wolves. However, no HD-limitations are given for the followers, making it possible to gather dire-wolves, werewolves etc. While the idea of the PrC is cool, the mechanic to establish a pack is raw at best and just sloppily slapped into the pdf at best. Without any guidelines to determine the strength of the followers, it falls to the DM to balance this class, which due to its other class features, should prove to be a precarious endeavor – after all, the pack master can inspire his pack via a plethora of ways and later even simultaneously dual inspire his pack members or drain the strength to fuel his own. Great concept, bad execution.

Finally, we get some new werewolves. The Lok’Wa are nomadic wolflike humanoids and come with racial traits and probably are supposed to be a player race. I somewhat had the impression that their write-up is supposed to cater to the Furry-crowd, as the one-with-nature-noble-savage-fluff somewhat felt like “Let’s play a werwolf sans the curse or other lycanthropic features”. While not bad per se, I feel like this caters to said audience and I for one don’t enjoy being catered to. Worse, as a valid race write up it fails due to space restrictions, lacking sections of interactions with other races, a racial paragon class, traits, feats, magic etc. – all the staples that have become standard. They would have better fitted into a separate pdf.

Next is the Rager-template, which is a form of lycanthropy that does not transform the person physically and is thus suited for almost all settings and emphasizes the psychological side of the lycanthropic lore. Two sample-statblocks are provided as well.

The Vurdulak (CR 8) are corpses possessed by a wolf-demon with some neat abilities and potential plot-complications. The Wolf-Were makes a triumphant return as well, coming with a template, a new spell and a sample statblock using a winter wolf as the base creature.

Finally, the Wulver (CR 3), a mindless form of were-wolf, is introduced – just think of them as the animalistic, cunning predators and rank and file were-wolves you slay by the dozens to get to the master.

Editing and formatting could have been better, I noticed some glitches that could have been avoided. Layout adheres to the two-column standard and artwork is mostly stock and CGI at that. Part I had better art-choices than this one. The pdf comes with a printer-friendly version and is fully bookmarked. This pdf is hard for me to rate for several reasons – I like werewolves. I really do. I liked some of the concepts from the original. This one, when it hits, hits hard and offers us cool options for the Werewolves. However, remembering the wildly fluctuating power-levels of the Lycaonite and the balance concerns I had then, this gross imbalance is only amplified by this pdf. While most of the content oozes style and several of the feats are plain awesome, the amount of terribly broken feats serves to negate the overall usability of this pdf. Add to that the shoddily put-together PrC (that had such a promising concept) and I can only wonder how this got past editing/playtesting. While the monsters are mostly ok to good and definitely serve a niche, I’m hard-pressed to recommend this pdf to any PLAYERS. Why? Because it breaks the game if not monitored with the utmost caution. In fact, I’d flat-out disallow this pdf for use by PCs and would only make a select few feats available. I’d usually go for a 1-star rating at this point. However, the ideas per se are good and if you as a DM want to build terrifying were-wolf battle molochs that mow through PCs like the reaper’s scythe, this pdf might interest you. Add to that the low price and I#ll settle for a final verdict of 1.5 stars, rounded up to 2, as this pdf fails what it sets out to do, but could be of use to some people.

A Necromancer’s Grimoire: Marchen der Daemonwulf II is available from: