The Sinking: The Skullfire Inquisition 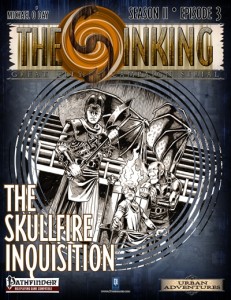 This installment of 0onegames’ short modules centering on one catastrophe is 19 pages long, 1 page front cover, 1 page SRD, 1 page editorial, 1 page ToC, 1 page advertisement and 1 page back cover, leaving us with 13 pages of content, so let’s take a look, shall we?

Blood Senator Eldon Vulgrax contacts the PCs to escort one of his contacts in the Temple Ward from a safe house to true safety – unfortunately, said man, one Myron (or Byron, the module isn’t sure there) Galdemarr, has already been captured by the Skullfire Inquisition – a militant arm following the church of the newly incepted Cult of Lazarus. Turns out, the safe house isn’t that safe and a whole team of inquisitors is ransacking the place, looking for Byron/Myron’s silver sextant. It should be noted that the module here makes a lot of references to “move silently”, which should be “stealth” – easily avoidable glitch there.

Via minor investigative skills, the PCs track the inquisitors to a warehouse, which they can infiltrate (though the watchdog chimera will provide a challenging foe) and then make their way through subterranean torture chambers – via drugs, prisoners are made pliable, then they are subjected to the tender ministrations of the villain and his gargoyle ally – turns out, they have an item that, when placed upon the brow of a target, lights up and has their thoughts and memories literally burned away. The torture master may inhale these fumes to know the respective contents. A vile (and fully depicted) item. Oh, and the hiding place of the sextant is actually smart enough to make the adversaries not look like complete tools for not getting it.

Editing and formatting are okay, though some glitches have crept into the module. None of them are truly glaring, though. Layout adheres to 0onegames’ elegant, nice two-column b/w-standard with awesome pieces of b/w-artwork and neat cartography, though sans player-friendly versions. The pdf comes fully bookmarked for your convenience.

Michael O’ Day’s Skullfire Inquisition is a straight-forward rescue scenario that comes with some nice ideas, but ultimately mostly boils down to “KILL EVERYTHING”. Don’t expect much social interaction, investigation or the like. That being said, the adversaries herein are delightfully despicable and the item they use is dastardly indeed – there ought to be no question after that who bad guys are. Which is also one of the weaknesses of this module. The meta-plot of “The Sinking” has set up a particular faction as enigmatic and weird, but not clearly as evil – and this module ends suddenly, with one blast, all pretenses: Said faction is revealed to be vileness incarnate, capital “E” EVIL. And the meta-plot suffers from that, at least in my opinion. When weirdness and enigma before this module made the faction in question intriguing and frightening, now it is simply yet another group of vile bullies for the PCs to crush. In fact, at least in my opinion, this module ends one of the most intriguing questions in a surprisingly one-dimensional way, not starting with how fast said faction got access to significant resources. Is the module bad? No. It may be a bit railroady and combat-focused, but it’s not a bad offering. But it also isn’t a mind-blowing one and resolves one enticing open question in a very disappointing manner. I’m not sure whether that’s due to meta-plot-issues or the author’s prerogative, but it left me a bit less excited than I was prior to reading this about The Sinking. Still, the price-point is excellent and hence my final verdict will clock in at a tentative 3 stars since I can’t fault the module for having the meta-plot not live up to my expectations.

You can get this very affordable module here on OBS!