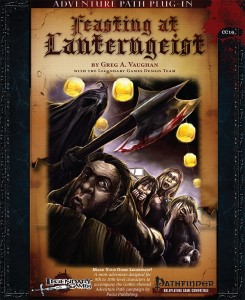 This module/plug-in to the Carrion Crown adventure path is 22 pages long, 1 page front cover, 1 page editorial/SRD, 1 page ToC, 1 page explanation of what an AP-plug-in is,2 pages of advertisement, 1 page back cover, leaving us with 15 pages of content, so let’s take a look, shall we?

All right, still here? Okay, if you’ve read the Carrion Crown AP, you’ll probably have noticed that #3 and #4 not only have a thematic shift, but rather that there’s no real lead-in to #4, making the transition of arguably, genres of horror from classic gothic to xothic all the more jarring. This module serves as a means to mitigate this change of tone.

At this point in the AP’s story-line, the PCs are hot on the heels of a certain fugitive rider, arrive in Illmarsh – just in time for the Lanterngeist-festival, the one time of the years when outsiders aren’t as badly stigmatized in the xenophobic community. Following event 2 from #4 of the AP, the PCs thus actually get a chance to socialize and rub shoulders with the populace of Illmarsh – but only for a short while, since several festival goers have been found murdered. Worse: Sheriff Rill Anders seems to be dead and only under-sheriff Grumph remains -time for the heroes to be recruited to help out! Grumph has his own theory suspecting the haunting of a ghost of old and proceeds to share this one en route to the first crime scene   here and at the second crime scene, players and PCs alike may start investigating the strange happenstances that indeed seem to suggest at first glance the actions of an axe-happy undead returned to destroy the living – which, of course means that he and the militia have to secure the crime-scenes while the PCs go ahead…

And as axe-happy, strange people are wont to have strange cabins in the woods, it should come as no surprise that this is exactly the next destination – where, after more disturbing investigation and clue-accumulation, the PCs are attacked by a vile slugspawn, basest of Shub-Niggurath’s Moits. On their way back, the PCs will find next to no traces of the militiamen -only bloodied whistles and arrows that point towards the under-sheriff wreaking havoc – in town, he’s nowhere to be found, though, and the mayor asks them to prevent further bloodshed during the festival – which proves to be harder than anticipated, for the slugspawn and the under-sheriff under their control have nothing nice planned for the PCs. In order to triumph, the PCs have to prevent apple-bobbing in a slugspawn-infested tub, not kill a fake headless horseman (part of the more macabre elements of the festival!) and finally track the homicidal under-sheriff, who is by now in the clutches of the dread creatures – which may result in a Resident Evil 4 Las Plagas-style head-explosion and full-blown mutation into the true and final adversary of this module.

The pdf concludes with a short help-primer (extremely useful) for running this module in the middle of AP #46.

Editing and formatting, as by now expected from Legendary Games, is top-notch – I didn’t notice any glitches. The pdf adheres to a two-column full-color standard and is gorgeous. The pdf comes with atmospheric charcoal- rubbing style maps as handouts and provides quite an array of beautiful, original pieces of full-color artworks for the mayor NPCs, environments and adversaries. The pdf is bookmarked with a total of 2 bookmarks – read: None that would help, meaning you should definitely print this one out.

The page-count seems meager, but this is Greg A. Vaughan we’re talking about – and he knows how to write concise! Furthermore, the font-size is actually rather small, meaning that there’s A LOT of information per page – which is neat! So how does this module hold up? It’s a short, sweet, simple murder-investigation and one with adversaries that imho are more interesting than the relatively tired adversaries of #46, which at this point have become somewhat predictable in the environment they’re found in. This will make sense for experienced DMs. So yes, overall, I consider this not only genre-wise, but also flavor-wise a well-crafted addition to the AP, one that brings the whole issue more to life and well worth of 5 stars and seal of approval – though I wished it were longer, more complex, more detailed – in short: I would have preferred “Feasting of Lanterngeist Extended” over “Wake of the Watcher” – but one can’t have everything, now, can one? To cut a long ramble short – a great plug-in with superb-production values, 5 stars + seal of approval.

You can get this great horror module (not only for Carrion Crown!) here on OBS and here on d20pfsrd.com’s shop!