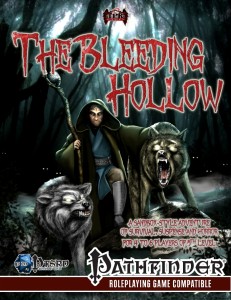 We kick off this massive module with a foreword by Frank Mentzer and an intro of TPK Games’ Brian Berg – novice-DMs: Read these! Why? Because if your players are used to level-appropriate challenges, CRs they always can defeat etc. – then this is a change of pace. This module is old-school and a sandbox, meaning the PCs will encounter foes they’d better pass by – and also meaning that there’s no easy plot-train to jump on. As a sandbox, this module endeavors to be modular and player action driven, so make sure your players know what they’re getting into. Now before I get into the module’s plot, I want to address two more things: Difficulty and structure.

TPK Games isn’t exactly know for cakewalk modules and this one is no different – if your players don’t fight smart, take care of their resources and if they think they can charge into any encounter without thinking, they will die. Still, difficulty is below the at times downright brutal classics Frog God Games provides -this is no Rappan Athuk-level meatgrinder. In fact, it is actually easier than the “Reaping Stone” – if you make sure that your players are at least moderately capable regarding stealth.

This has a reason that becomes evident soon – first of all, in the level of detail offered regarding the two settlements herein, the town of Westden Falls and the ailing mining town Bertram’s End. The towns come with copious details, often offering a b/w-picture per NPC – yes, shopkeepers, landlords etc. – quite a lot of illustrations there. More relevant for the type of DM who isn’t used to improvising stats for townsfolk (or their dialogue) – both are provided. Especially the read-aloud texts for likely questions asked of the respective NPCs should help DMs that tend to experience problems with the thespian tasks of DMing. It should also be noted that the villages come with village statblocks and neat b/w-maps (though player-friendly maps of the two, sans numbers etc., would have been nice…). Furthermore, the adventure comes with quite a few quests – these can be considered mini-quests for the fulfillment of one of the adventure hooks, for completing optional goals etc. – personally, I tend to structure my adventures like this, so nothing new for me, but most AP-players coming fresh to a sandbox will probably enjoy having these explained in detail as well.

Now, while this *is* a sandbox in the true sense, the module still has a plot and a progression, which hence comes with milestones (levels) that make it easy for the DM to judge whether the PCs are ready for (read: Have a chance to survive) the challenges ahead. What’s also rather nice (and something I’ve been doing as well) – the module offers tangible benefits for eating good food and drinking certain beverages, rewarding players for the arduous task of food tracking – why? Because this module, in part, is a wilderness scenario, including a table of weather by the day, temperatures etc. – the later in °F AND °C, btw. – awesome! For once I don’t have to on-the-fly change °F to °C – great service for all customers there.

Now the PC’s adventure starts off upon arriving in the town of Westden Falls (whose NPCs, as mentioned, are extremely detailed and offer quite some material for further adventures/sub-plots) via one of several VERY detailed hooks, which btw. all potentially can work together.

Since from here on out, I’ll be going into the details and challenges of the plot, I’d like to ask potential players to skip to the conclusion NOW – from here on reign the SPOILERS!

Only DMs left? Good! Sooner or later, the PCs will have to leave the comfortable safety of Westden Falls behind – whether to find missing spice merchants, missing elves, re-open trade-routes by killing off a bunch of harpies or escort a seamstress to a scheduled wedding. Unfortunately for the PCs, weather turns sour…extremely sour. In fact, weather has been foul for some time, but a winter-style cold snap in the middle of summer is impending and the PCs will have to track not only supplies and stand up to terrible storms, they will also have to cross a terribly fragile bridge and finally, hopefully reach a ruined church at the half-way point between the two settlements. Said dilapidated church by now is not only a dangerous environment, it’s also the base of the harpies that have been plaguing the area, offering chances for the PCs to vanquish these foes. Beyond that, the church also hides the lab of the missing spice merchants, which in truth were merchants of poison and death.

Beyond the church, the forests hide a massacre of elves – which introduce a further meta-plot element: The wood elves, who sold their lives 15 to 1 against gnolls and ogres and worse, were the caretakers of the magical seed of the Arsae Laidir, their powerful tree of life, which stands at the center of their enclaves. Upon overpopulation, wood elves go out with a seed in an exodus to start a new enclave….only this time, the exodus has been stopped dead in its tracks. The seed is missing and via speak with dead or similar means, the PCs may find out about it – and it spells bad news indeed. The seed is tabula rasa when it germinates and can be forced to gestate – by creating special circumstances of blood and death, the seed could be tainted with terrible consequences.

If the Werewolf-ogre barbarian crashing through trees wasn’t enough implication – Bertram’s End has fallen. The village is now a truly grim reminder of the dread consequences of failure on the side of adventurers, with the mining town being wholly overrun by gnolls of the Bloodfang tribe. It should be noted that both their wolves and the gnolls themselves are variants – the gnolls more often than not lupine creatures with their unique tricks. (And if you want more variants, Krenshar-style or even two-headed gnolls are part of the appendix of the module, where some great variants are provided.)

Beyond that, the mining town by now is the place of dreadful atrocities committed daily against the remaining populace – and it is here, stealth becomes relevant. While nothing keeps PCs from starting guerrilla warfare, a group of PCs trying to take the village by unsubtle force will suffer. Thankfully, the module includes patrolling routes etc. – and beyond saving the groups of villagers (or administering euthanasia – there are shades of grey-decisions here), the PCs can also find another subplot: The town’s founder is known nowadays under an alias, having faked his death back in the day and the insane alchemist has indeed made his mine a dangerous place to traverse – whether to escape the town, escort NPCs outside or just to finally end the mad alchemist’s experiments, there’s a dangerous dungeon here. Things get even more complicated by a honey-tongued accomplice of the alchemist, ready to try to bribe the gnolls with the last, polymorphed survivor of the elves remaining… (It’s a bit of a pity said elf gets no stats, but oh well…)

The clock’s ticking, though -every day, a child is sacrificed to the seed in order to corrupt it and to truly vanquish the evil, the PCs not only have to get rid of the dread gnolls besieging the city, but also interrupt the ritual conducted by the vile druidic lycanthrope mastermind behind the woes that have befallen the area. The ritual itself and stopping it turns out to be a truly tough final battle in the titular bleeding hollow, with the ritual’s properties offering some rather unique effects that make the combat against Jirak Thoole a memorable final encounter. It should also be noted that some (though by far not all) encounters come with scaling advice +/-1 level.

Editing and formatting are very good, but not always perfect – I noticed a couple of minor glitches, though not enough to truly hamper the overall experience. Layout adheres to a printer-friendly two-column, full-color standard and the pdf comes with nice original pieces of b/w-artwork. The pdf comes fully bookmarked for your convenience and the hardcover is solidly crafted. The b/w-maps are glorious, but the absence of player-friendly maps makes for a minor detriment. Especially the mine’s levels could have used hand-out style maps, since they are VERY small in the pdf/book. So map-wise, in spite of the quality, some minus-points here.

Brian Berg, PJ Harn, Rick Cox and Bernie McCormick’s Bleeding Hollow is per se a great dark fantasy sandbox and a surprisingly beginner-DM friendly one – while not as easy to run as more linear modules, the detail each statblock provides (often explaining each ability), the copious sidebars and extensive, well-written read-aloud prose, make this sandbox surprisingly easy to run – which wasn’t what I was expecting, to be honest. The Bleeding Hollow turns out to be a challenging, dark adventure, yes, but also one that is relatively easy to run. Now branding-wise, I have *somewhat* of a problem with this being labeled “wilderness” or “survival” – after the journey, the survival aspect becomes more of a background theme, but I won’t complain about that – while generally, I would have preferred a second journey section to the finale, I won’t hold that against the book. In fact, this sandbox makes for a great introduction of moderately experienced DMs to old-school style gaming and its peculiarities and is defiantly dark in tone – all in all, a fun sandbox with a believable villain and iconic areas. if I had to voice gripes, it would be that “The Reaping Stone” spoiled me regarding epic boss fights (a multi-phase final fight would have been nice) and, more importantly that the maps are problematic – whether in the dead-tree version or in the pdf, printing them out in their at times VERY small depictions, cutting them out etc. just doesn’t make for a comfortable use, requiring you to essentially redraft them, if you want to hand them out. Having these as hand-outs would have made the module so much easier to use…

Still, the overall module is great, deadly, fun, atmospheric and easy to run – hence, my final verdict will clock in at 4.5 stars, rounded up to 5 for the purpose of this platform and this nice introduction to old-school sandbox gaming. Just make sure to take some time to get the maps done…

You can get this cool beast of a module here on OBS and here on d20pfsrd.com’s shop!