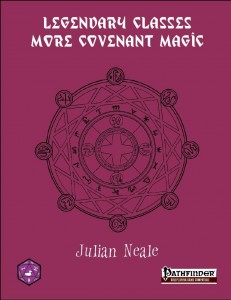 So this is the long-anticipated sequel to one of my top-ten books of 2013, the expansion to David Nicholas Ross’ superb covenant magic book! A hard legacy to live up to, so let’s take a look! Page-wise, we get 35 pages, 1 page front cover, 1 page ToC/editorial, 2.5 pages of SRD, leaving us with a massive 30.5 pages of content, so what do we get here?

Now I *assume* you’re familiar with the exceedingly cool, but also complex medium class from Legendary Classes: Covenant Magic in this review, so if you’re not, please check that one. Okay, back? Great! We kick off with not only a short side-box covering the role of mediums in the game-world, but also new influences – each with its own bonus language, trance covenants, SLs, recommended boons and unique capstone fundamental influence.

And if you’re like me and were missing some in the original to realize specific concepts, this one will provide – We get the Abyssal Hordes, Daemonic Oblivion, Ancestors (Orisions, anyone? Spirit-shaman/skaldic traditions?), Dark Tapestry (YEAH!), Deathly Fear,Draconic, Eternal order, Lifegiver, Lore, Natural, Occult, Primal Chaos, Time, Trickery and Walking Dead Influences.

It is within the nature of these that I ought to go into very specific detail to point out *why* they work – the thing is, it’s not that easy. I could bore you by replicating all respective spell-lists/trance covenants and gush about why the respective spell lists are actually well-balanced and thematically fitting – but that wouldn’t help you that much, so instead let’s take a look what these offer: Law/Chaos-axis? Check. Evil non-devilish outsiders? Check – especially cool that daemons didn’t get skimmed over! Shamanistic traditions/nature-theme? Check. Dragons & Dark Tapestry? Check. What about more obscure ones like “Deathly Fear”? well we get a concise list of sample creatures of this category that include avorals, azatas, but also animate dreams, bogeymen, crypt things etc. – the level of detail here is what makes the difference between a category that could have been arbitrary and one that actually feels like it works, like it’s concise.

Anti Undead/Undead? Check. Pathfinder/Scholar-theme? Check. Occult detective style, guided by spirits? Check. Trickster/Time-master? Check. Seriously, all the concepts that were hard to pull off in the original pdf now just rise from the page while reading.

Better yet – the last page of the pdf and the section after these influences are devoted to a short errata of the original pdf and an FAQ devoted to helping less experienced players with the medium-class and the integration of covenants into a game. Better yet: A handy spirit boon table for use of reference with this and its predecessor book and a handy combined covenant cost table make the superb material even easier to use.

Now you may be aware of Radiance House’s Pact Magic Unbound-series and I’ve been asked time and again whether Covenant and Pact Magic work together. So let’s get this out of the way once and for all: Yes, they do. In fact, perfectly! Think of Pact Magic as the occultist’s/Pro’s take on binding specific spirits, whereas mediums gravitate to a more general allegiance and they perfectly coexist, doing things quite differently, but at the same time working neatly in concert. This is also neatly represented by 5 new feats, of which 3 are adaptations of feats from pact Magic, reworked for covenant magic. It should be noted that Purple Duck Games explicitly states this in a superb example of 3pp-cameradrie when they could have just relegated this information to the SRD. So what do the feats do? Longer trance, +1 spirit boon at 4 levels lower, pick one SL from your list to switch spontaneously against another one, opt to exclude creatures from activated covenants, bonus to saves and a feat that makes SUs provoke AoOs against you – a must-have feat for hunters of the occult!

Next up would be new archetypes, with the Animist Druid being first. This druid loses wild shape, nature sense and similar abilities in favor of some covenant magic/trance…with a neat twist: You’d expect the archetype to prescribe influences, but no such crippling choice. Yes, you can actually play a druid haunted by the outer dark, inspired by the heavenly host or the like…beyond, of course, the evident theme that this archetype gels really well with the elemental influences! Now where there’s a druid in that manner, a ranger won’t be far and yes, a ranger focused more on being guided by totem spirits/ancestors/demons from friggin’ hell – possible.

The Medium may now opt for the Blood Shaman archetype, which is VERY interesting – mediums cast 6 levels, sorcs 9 and this archetype grants a sorc’s bloodline corresponding to the influence of the medium’s influence as SLAs, broken down to the medium’s spell-like ability array – but at the cost of being able to use the influence trance covenants while in trance. This is one of the rare archetypes that looks none too impressive on paper until you try wrapping your head around it and see the possibilities….of which there are quite a lot. Alas, before you power-gamers out there rejoice – for balance’s sake, the archetype gets no bloodline arcanas. Hex mediums are a simple, yet elegant archetype that replaces spirit boon with a hex at 1st level, 2nd level and every even one after that. As a minor nitpick here – the archetype is intended to also offer major and grand hexes at the respective levels, whose starting level of availability the ability fails to mention. Since the hex-progression is analogue to the witch’s, I’ll let that slide, though. Still, quite powerful.

The Medium can also opt for the master of the occult archetype, which is my naughty dream come true – Pact Magic/Covenant Magic crossover-archetype. Yeah. There you have it. *drool**salivate* No spirit boons, but the option to bind spirits, constellations concisely broken down according to influences…glorious.

The Inner Eye Fighter gets spirit guides, may detect spirits and can wilder among the spirit boons for a cool take on the supernatural fighter. Similarly, the metaphysical alchemist gets a spirit guide and may also dabble in spirit boons, but loses the bomb class feature – great for people who’d rather go the philosophicla route than that of the demolition’s expert. The Protican would be a sorceror who gets an influence according to their bloodline and loses one known spell per spell level, but gain the influence’s bonus spells. They may also enter covenant supplicant feats instead of their bloodline feats – interesting! Revelation Mediums replace spirit boon with access to a revelation that thematically matches their influence. Spirit Sage bards may have no bardic knowledge, but they can enter trances and perform séances and finally, trance warriors are barbarians with a kind of battle trance (+2 Str, Cha, +4 Con) and wilder a bit in medium-territory – though at the cost of those delicious rage powers.

Next up would be 27 different covenants – unearthly weapons, auras of madness or consumption, punitive gazes, SLs, curses, diseased attacks, interplanetary teleports, become a nexus of negative energy, heal by tapping into time…quite an array of cool covenants, all ready at one’s finger tips.

Let me note something here. I’m using a LOT of 3pp-classes, primarily because I think some of the coolest, most awesome classes out there, are 3pp. The bane of my existence as a DM, though, tends to be that first thing I do once I found a great new class…is make chars/NPCs. A lot of them. From a lowly CR 2 goblin medium to a CR 19 level 20 elven revelation medium (though there is a minor glitch in teh statblcoks to be found), we actually get 13 sample statblocks here, all ready to throw into your campaign at the flick of your wrist, not only fully statted, but also using the new rules herein. This is glorious and a practice I’d hope more publishers would follow.

Editing and formatting are quite good – while here and there italicizations of spells are missing, no wording issues that would have impeded my understanding of the book cropped up. Layout adheres to Purple Duck Games’ printer-friendly 2-column standard. The pdf also comes with several GORGEOUS full-color artworks by Jacob Blackmon, Gary Dupuis and Mark Hyzer. Especially the wendigo of the latter will bring you nightmares…in the good way. The pdf comes fully bookmarked for your convenience.

The more complex a class is, the more moving parts it has, the harder it s to design for – pity, but it’s like that. When I heard that the original author would not be the one in charge of the expansion, I wasn’t too thrilled. Well along came author Julian Neale (with Mike Myler doing additional writing) and tackled a mammoth task. My expectations for this were HIGH and I took a fine-tooth comb to the spell-lists and options herein…and instead of finding disappointment, I found rapture. *insert bioshock jokes here*

This is one of the expansions that isn’t flashy at first sight, that takes a bit of time to settle, to click to register in the possibilities it offers. You’ll need to read this carefully, and slowly – the writing is very concise. Once all the potential does sicker in, you won’t stop grinning regarding all those character concepts now at the call of your finger tips. This is a superb expansion to a glorious system, one that breathes the spirit (pardon the pun) of 3pp-cooperation, one that significantly increases the concepts and options that can be realized with covenant magic…and as the icing on the cake, it makes using everything more comfortable for both player and DM. Seriously, if only all expansions were this good! Julian Neale has done a tremendous job here and the linking with pact magic, at least if the folks who’ve contacted me are any indicator, will not only find resounding applause with me. Better yet – if you’re not into pact magic, you still won’t have lost much page-count – less than a page, in fact. That’s what I mean with concise design – a short, humble archetype, a whole cosmos of interactions/possibilities.

This pdf manages to maintain the stellar quality of its predecessor. Think how I gushed about that one. Yeah. It’s perhaps less obvious in this expansion, but believe me – this is superb. stellar and making it was quite probably A LOT, an AWFUL LOT of work. Let’s sum it up: Superb new content. Infinitely more options. Sample NPCs, easier to use due to comfortable tables. Nice FAQs to further help. Neat production values. Spell-selections in influences that are neither boring, nor obvious and always balanced. Wow. Just wow. 5 stars + seal of approval, would go higher if I could, candidate for my Top Ten of 2014. Must own for anyone using covenant magic. Fans of pact magic looking for synergy/ways to blend both need this as well. And if you have neither Pact Magic, nor Covenant Magic…what are you doing? Take a look at them! They have A LOT of awesome roleplaying potential to add to the table.