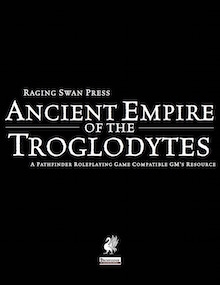 The first installment of “Ancient Empires” clocks in at 23 pages, 1 page front cover, 1 page advertisement, 1 page editorial/ToC, 1 page SRD, 1 page back cover, leaving us with 19 pages of content, so let’s take a look!

So, this is a source-book about an ancient empire, and as such, we are introduced to Ssar’targontha – the eponymous empire of troglodytes….only that it kind of isn’t. See, we all know troglodytes as those smelly, degenerate lizardfolk, right? Well, you may not be aware of that fact, but the word actually came into the English language from Middle French, based on Latin – “troglodytae” denoting “cave dwellers,” literally “one who creeps into holes.” It should come as no surprise, then, that this empire is situated in the deepest recesses of the underworld. Bear with me, for a second, for the word took on another meaning, roughly during the 19th century, when its use to denote a person that was considered to be “degenerate” found wide-spread use aside the horrible tenets of social Darwinism – it is, undoubtedly from this context, that the connotation of dilapidation and regression that has influenced the portrayal of the troglodyte race, has been introduced.

It should then come as no surprise, that the denizens of this empire have no more in common with general renditions of troglodytes than we do with apes – 7 feet tall, intelligent and advanced, with their own cuneiform script, these beings once performed great rites atop their subterranean ziggurats – but alas, time marches on, and the empire fell to internal squabbles and the war against the elemental planes, incurred by the practice of elemental-sacrifice. Nowadays, only ruins and remnants of the ancient glory remain, and the deity of the empire, Amon-Pyr (with a full, fluff-centric write-up), has largely been forgotten.

Lost is the knowledge of the ancient troglodytes’ caste-system (though not so for the GM, who gets proper insight into the subject matter) and several short write-ups of sample ruined cities help visualize the ruins alongside key notes on architecture…and a great b/w-artwork that captures the slightly unsettling glory of such a city -from the canals to the aqueducts, the civilization as depicted here offers a tantalizing glimpse of aeons long gone.

However, unlike more rudimentary supplements on such a subject matter, this book frankly goes one step beyond what you’d expect – there are no less than 20 whispers and rumors that double as potential adventure-(or even campaign-) hooks. Better yet, the book also sports some handy advice for the GM to help squeeze the maximum amount of enjoyment out of this book – so yes, this aspect can be considered to be somewhat of a larger, more detailed version of an alternate-dungeon-book… or a dressing-book. No less than 100 entries of dungeon dressing allow for massive customizations of ruins – thematically-fitting and awesome, this aspect of the book is reminiscent of the dressing-series we all know and love. So yes, there is a lot to see and experience in the ruins – if you don’t get killed by the 3 new and awesome traps, detailed in Raging Swan Press’ trademark level of detail – you could e.g. be cut apart by pressurized air (!!!). Yes, this is nasty and awesome!

Traps are not the only thing that can kill intrepid explorers, though – the CR 6 tentacled hunter-creature Pyr-tok, the scroll-wrapped CR 9 urshak’xhul troglodyte mummies of the massive CR 11 zworms, all with their own stunning b/w-artworks and unique, inspired signature abilities, constitute some absolutely glorious adversaries. It gets even better – 4 magical items, 4 sample hoards to find and a table of 20 sample trinkets and minor treasures provide sufficient rewards for the brave and/or foolish that explore these ruins.

The pdf also sports 5 new spells that let you belch forth writhing masses of tentacles or emulate the stench of troglodytes. 5 solid feats allow for the use of Cleaving Finish with thrown weapons, better defense while fighting defensively, etc. – the feats are okay, but fall greatly behind the rest of the pdf in terms of awesomeness. The book also sports two more extensive class options: The Urshak’entu cleric, whose life steal ability can grant temporary hit points when dealing negative energy (but having no synergy with all those channel energy-effects as a balancing factor) and the new Ssar’targontha-bloodline for sorcerors, which is pretty neat. Finally, there is the CR+1 degenerate creature template.

Editing and formatting are top-notch, I noticed no glitches. Layout adheres to Raging Swan Press’ two-column b/w-standard with a significant array of unique and awesome original b/w-artworks. The pdf comes fully bookmarked with nested bookmarks and the pdf comes in two versions – one optimized for screen-use and one to be printed out.

This is the first Ancient Empires-book and, let’s get thsi right out of the way – this cements John Bennett’s reputation as an author who gets darker fantasy and horror even further: Were I to describe this book’s flair, it would be a mix of Kenneth Spencer/Mr. Kortes and Nicolas Logue/Richard Pett. Yes, I’m not using these comparisons lightly – this book is awesome in all the right ways: Smart, concise…and it takes essentially the key-components of RSP’s product-lines and combines them into one glorious book. From the rumors to the dressings to the traps and creatures, not one component of this book is anything less than stellar…apart from the player options. Don’t get me wrong – they are not bad. The spells are a bit hit and miss, but both feats and class options left me somewhat less inspired than I anticipated.

Now before you judge too soon – at the point when I first read this, I was thinking “OMG, this is so awesome, it needs to feature on my Top Ten-list!” – the content for the GM is that superb. The player options, on the other hand, are solid – they’re not bad in any way and supplement the material well, but compared to the more inspired pieces of crunch out there, they fell slightly flat of the superb quality of the rest of the book, only clocking in at good/very good levels, when the rest of this tome is all about excellence. In the end, though, this only is so apparent because the majority of this book is downright brilliant. While this book thus misses my Top ten-list by a margin, it still constitutes perhaps the most impressive first offering I’ve seen in a product-line for a long time. Any GM looking for a superb toolkit for ancient ruins should get this ASAP – my final verdict will clock in at 5 stars + seal of approval.

You can get this awesome book here on OBS and here on d20pfsrd.com’s shop!