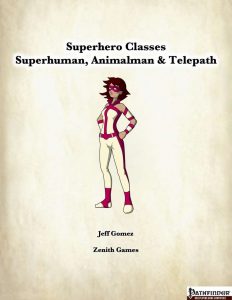 This pdf clocks in at 21 pages, 1 page front cover, 1 page editorial, 1 page SRD, leaving us with 18 pages of content, so let’s take a look!

The first class would be the superman, who gets d8 HD, ¾ BAB-progression, good Fort-saves, 4 + Int skills per level, and proficiency with simple weapons and light armor, but not with shields. (Captain America’s weeping…) First level nets resistance 1 versus acid, cold, electricity, fire and sonic resistance, which increases by 1 at 3rd level and every 2 levels thereafter. The superhuman also may exist in temperatures from -50 to +140°F (-45 to 60°C) sans having to make Fort-saves. The superhuman loses this ability when wearing medium or heavy armor. 1st level also nets DR 1/- that increases at 3rd level and every 2 levels thereafter by 1. Once more, no armor synergy. The class begins play with Improved Unarmed Strike as a bonus feat, and may execute attacks with this feat even with hands full and treat them as two-handed weapons. There is a damage-increase table that takes Small, Medium and Large characters into account. 10th and 20th level increase critical multiplier of these attacks by 1. 3rd level increases the Strength score for carrying capacity purposes by +4, which increases by a further +4 at 8th, 12th and 17th level.

At third level and every odd level thereafter, the superhuman gains an ability score improvement: +2 Strength at 3rd level, then +2 Dexterity at 5th, then +2 Constitution at 7th, and then, the whole sequence starts again, for a net gain of additional +6 Str, Dex and Con over the course of the 20 levels of progression – from this ability. The capstone further increases all 3 scores by +2, for a total gain of +8 to all physical ability scores over the course of the class progression. There is a bit of customization for the class: Starting at second level, we choose a superpower, and we gain an additional one every even level thereafter. These include three that further increase the physical ability scores. The abilities that can be taken here include low-range blindsight that slightly increases at 13th and 19th level, infinite use energy blasts (1d6, +1d6 for every 3 levels beyond 2nd, + ½ Constitution modifier) damage with a range of 30 feet, a bonus to Acrobatics that becomes slow flight at higher levels, a bonus to CMB and CMD based on size difference (Yay?), fast healing, or being able to work with less sleep, sans food and water, etc. We also get darkvision, increased speed, and a no-cooldown AoE 30 ft.-cone bull rush using Constitution instead of Strength. Limited teleportation, swimming, rock throwing, you get the idea.

Here’s the thing: None of these abilities are interesting or distinct. You can have all of them in more interesting iterations, gain pretty much all of them via magic items, etc. They translate classic superhero stunts, sure…but said stunts often are more interesting in the respective iterations provided by other classes. The superhuman’s blast gets boring very fast when compared to the kineticist, for example. So yeah, while not per se bad in the traditional sense, this is no class I’d ever play.

The second class within is the animalman, who has d8 HD, ¾ BAB-progression, 6 + Int skills per level, goof Fort- and Ref-saves, proficiency with simple and martial weapons, light and medium armors and shields, excluding tower shields, and uses the same paradigm of physical ability score increases starting at 3rd level, including, which is rather lame, the same capstone. The class also gets the same superstrike unarmed strike progression as the superhuman. The class gets +1/2 class level to Perception and scent, and at 2nd level may roll initiative twice, taking the better result. 7th level allows for acting in the surprise round, and 11th level allows for rolling initiative thrice, taking one of the results. At 7th level, the class gets dominate monster, using class level as CL, for a duration of up to class level rounds. The ability may only target animals within the class’ portfolio and the saving throw DC is governed by Charisma. Nice catch: takes mindless targets into account. The animalman can speak with animals from his portfolio, which is governed by the animal aspect chosen at first level. The pdf includes 14 such aspects, which behave in many ways like bloodlines or orders, in that they provide a linear ability progression, granting abilities at 1st, 6th, 10th, 14th, 18th and 20th level.

These aspects range in utility and uniqueness rather drastically. Ant, for example, is interesting in that it takes the size modifier and special size modifier engine and tweaks it, with handy tables to supplement the changes. Bat nets you a couple of skills, Shatter Defenses and faster Intimidation. If you want play Batman, Interjection Games’ Gadgeteer and e.g. the Scholar by Drop Dead Studios do a much better job – just sayin’. Beast (which includes canines, felines, etc.) nets natural attacks (doesn’t specify the type of natural attack) and the capstone nets 1.5 times the Strength bonus to them. Which is USELESS, considering the damage progression of superstrike. Fish nets you +2 to atk and AC, and +2 to all saves while fully submerged, an aquatic companion at 10th level that may fly later, and the swim superpower at 1st level alongside trident and net proficiency. The capstone nets you regeneration 3 that’s bypassed by fire while submerged. That’s the entirety of the benefits granted. Lame? Yep. The archetype does come with an archetype that replaces the superpowers at 4th level and every 4 levels thereafter and the capstone with a second aspect gained at 4th level, with the ability progression for these delayed by 2 levels.

Pretty much all shifter classes, from the one by Everybody Games to the one by Legendary Games (and the awesome skinchanger) to the Interjection Games class to even Paizo’s subpar shifter are more interesting. If you want a superhero style class sans shifting that is a master of animals, then Purple Duck Games’ Animal Lords are superior.

Finally, there would be the telepath, who gains d6 HD, 2 + Int skills per level, ½ BAB-progression, good Will-saves and an ability score progression that instead grants bonuses to Wisdom, Charisma and Intelligence in sequence. The capstone instead nets +2 to all of them. Telepaths are proficient with simple weapons and light armors. Telepaths are full psychic spellcasters that5 may learn any spell from the wizard, cleric or psychic list, provided they are divination, enchantment or illusion, using the lowest spell level if a spell is available on multiple spell lists. The telepath is a spontaneous spellcaster, using Charisma as governing spellcasting attribute. 2nd level nets mental armor, which translates to +Wisdom bonus to AC as an armor bonus, which increases to 1.5 times Wisdom bonus at 9th level. The class begins play with at-will mage hand and telepathic strike: This is a ranged attack with a 30 ft. range-increment, using class level and Intelligence modifier to calculate attack bonus. This gains the benefits of haste, feats that enhance ranged combat, and the strike is mental and requires no free hands. It doesn’t qualify for TWFing and sniping penalties are noted. The strike deals 1d4 + Intelligence modifier damage and increases base damage die size at 4th level and every 4 levels thereafter, with 8th level also providing 1.5 times Intelligence modifier to damage, which RAW vanishes in subsequent damage die increases. D10s switch over to 2d6s and then, 2d8s. The ability fails to specify its damage type.

At 2nd level, the telepath may meditate for one minute to gain class level temporary hit points, usable up to Wisdom modifier times per day. Also at 2nd level, we have the option to use combat maneuvers with “telekinetic strikes” – which the class doesn’t have. The ability is called “Telepathic Strike” – though telekinetic strike would make more sense. 6th level nets detect thoughts at will, though creatures that saved versus it are immune for 24 levels. 4th level nets the first cool ability here, the option to move items and critters with sustained force, with the save to resist being governed by Intelligence modifier. Higher levels provide the option to manipulate larger items. 10th level nets telepathy, and 6th level the option to hurl targets, with the maximum size increasing at higher levels.

The telepath would be interesting were it not for the fact that Ultimate Psionics or The Telekinetic’s Handbook, to name just two, do a vastly superior and more interesting job at the subject matter.

Editing and formatting are very good on a formal level, good on a rules-language level, certainly better than the other early Zenith Games undead paragon classes, for example. Layout adheres to a two-column b/w-standard with colored headers, and the pdf uses b/w-public domain artwork. The pdf has no bookmarks, which constitutes a comfort-detriment.

But nowadays? Nowadays, we have a metric ton of archetypes, classes and options that do literally everything in the pdf, just better. In a more interesting manner. For each of the three classes, I could provide a list of its own of options that do everything herein, just better. In a more versatile, unique and cooler manner. The one reason to get this pdf, probably, would be the low price point, and the fact that the classes are comparably simple. Then again, they’re not so simple as to make them perfect beginner’s classes either, and lack the supplemental material you’d require. As a whole, this may not be bad, but it is woefully outclassed by pretty much all of its peers. My final verdict can’t exceed 2 stars.

You can directly support the creation of reviews by joining my patreon, or leaving a direct donation.