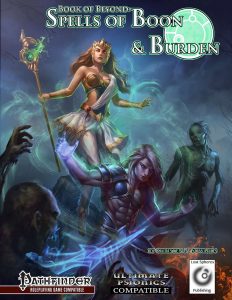 This installment of the Book of Beyond-series clocks in at 42 pages, 1 page front cover, 1 page editorial, 1 page ToC, 6 pages of SRD, leaving us with 33 pages of content, so let’s take a look!

So, the pdf begins with explaining the goal of this book – it seeks to provide a sense of unique identity and being “the best” at something for psychic magic – something that sets it apart from the arcane. The witch is included in a heavy manner as well. Conceptually, spells of boon are spells that provide benefits to allies at a cost to themselves. Spells of Burden, on the other hand, tap into the concept of spiritual balance. Both general concepts make sense from a metaphysical pointo to me, and as such, fit the theme of psychic magic. Undercasting is also explained. The spells are designated with the help of their respective descriptors.

After this introductory explanation, we receive a variety of spell-lists for psychic casters, by class, then spell level – as mentioned before, the witch is fully included as well. The presentation of the spells then provides them in alphabetical order, with Spells of Boon as a category coming first – good decision! A total of 29 spells of boon are provided. Going through all of them one by one would be redundant, so to give you an idea: Boon of Crimson Vitality, a second level spell, lets you accept a scaling amount of bleed damage, while an ally gains an alchemical bonus of +2 for every 2 bleed (erroneously called “blood” here) you incur. The bleed effect lasts for twice the spell’s duration, or until removed. At 5th level for spiritualist, 6th for the other occult classes and 7th spell level for the witch, we have Boon of the Drifting Form, which paralyzes you, but makes the recipient creature incorporeal. Boon of Floating Grace nets a creature +2 dodge bonus to AC, and fly speed equal to base speed, but renders you prone. This one, alas, is a spell that needed some clarification. You can end the prone condition by just standing up, which, I assume, is no option while under the spell’s effects. Furthermore, the spell does not specify a maneuverability class for the fly speed. This is somewhat exemplary regarding the problems some of these spells have – Boon of Dancing Steps does not type its bonuses, and e.g. Boon of Flowing Stone provides a primal bonus – a bonus type that RAW does not exist. Since this is the ONLY instance where I could find this bonus type in the Book of Beyond, I assume this to be a remnant of a version-revision. So yeah, while the integrity of the rules per se is there, there also are a couple of instances where the book could have used a slight polishing to iron off the few kinks that remain.

Wait! Why am I not screaming fire and brimstone? Why did I, of all conditions, choose the one with “prone” as an example? Simple. You see, the spells can’t be cheesed. Immunity to a condition does prevent you from casting the spell. This is per se a great catch. However, RAW that does not prevent you from gaining immunity AFTER casting the spell – the descriptor should specify that becoming immune to the condition accepted also ends the spell. It’s an easy modification for the GM to implement, but it’s one I’d strongly suggest adding.

Boon of Dual Minds lets the target make saves twice, once at their own value, and once using yours, but the caster is stunned. You can buff allies, granting them atk bonuses (properly codified!) and suffer the effects of various degrees of fear, as you literally grant them your courage. Boon of Imbued Vision grants an insight bonus to AC and an untyped bonus to Strength and Dexterity-based skill checks, as well as the Blind-Fight (erroneously lower-case’d) feat and uncanny dodge, but you’re blinded. Problematic from a balance point of view would be an extra move action (at the cost of the caster being staggered) as a first-level spell, and the enhanced action, which, as soon as level 4, bestows an extra standard action, +30 feet to all movement rates, but at the cost of the caster being unconscious. Ouch, right? See, this is why I explained the importance of airtight anti-abuse-caveats and provided the examples above –particularly because these boon spells? Swift action casting time, all of them. I adore the concepts and implementation, and assuming that the descriptor isn’t cheesed, they do make sense at their respective spell levels. They are still something to handle carefully as a GM, but flavor-wise and regarding execution? Yeah, I’ll be using them.

Let’s proceed with taking a look at the spells of burden, right? There are 6 of these spells here – however, they exist for a ton of spell levels each, making ample use of undercasting – they generally range from level 1 -9 or 6, with one instead capping at level 5. Burden of the Barbed Blade. This burden has you make a CL-check, with the target DC based on the creature’s HD, and causes bleed of BAB – ½ HD, rounded up; the target may accept a penalty to atk to prevent taking bleed, and the higher level iterations can cause fatigue, exhaustion and staggered once the target has taken a certain amount of bleed. The spell, obviously, does not affect full casters – something it specifies, rather elegantly, in its target line.

Burden of the Brilliant Soul imposes a penalty of CL, with the option to instead take “psychic damage”, which is something that does not exist in PFRPG. Psychic crush (and analogue spells in SFRPG as well, fyi!) cause untyped damage, yes – however, they are mind-affecting, which this spell-family is not. That is either a glitch in that regard, or an erroneous reference to the 5e-damage type. Burden of the Hungry Regalia is super interesting, in that it makes the items of the target hunger – accept negative levels, or the items cease working. Particularly at mid- to higher-level games, one damn cool spell. Same goes for the amazing Burden of Power’s Weight that actively discourages stacking  ton of defensive incantations – for every effect, the caster can gain an enhancement to CL…or the target can dispel/dismiss the effects. I love this. At higher levels, this one also deals force damage, which reminded me of one of my favorite obscure 2nd edition spells. Burden of the Ready Mind enhances your CL for prepared spells the target has – but, you know, they could opt to lose them? I love the emphasis on choice etc. Burden of Sanguine Strain is a bleed spell that, conversely, can inflict pain on spontaneous spellcasters.

Finally, there would the spells of equivalence – these are interesting, in what they do – armor of influence (and its weapon of influence compatriot spell) allows a medium to enhance armor, with influence as a cap – the spell references a whole array of special armor qualities (not properly placed in italics) that may be added in a limited manner at higher CLs. Bloodrush causes untyped damaged based on already existing bleed effects. Very interesting, if a bit hard to grasp at first – the 5 Child of Suffering spells, which require that the caster has some sort of illusory duplicate. If so, and the caster takes damage, the spell may be cast as an immediate action. This grants you temporary hit points and siphons an amount of the pain you feel from an injury to the duplicate, which may attack on your turn as a touch attack in melee, inflicting damage. Successful attacks make the duplicate vanish. I like how this builds on mirror image etc. A mind-affecting diameter that deals damage to those inside or beyond it, and there is a spell that increases damage by distance – both of these should have maximum values, as they are cool, but can end up being very deadly in the hands of ingenious players. As a nitpick: These spells you say “You deal *insert dice formula*…” and never specify “damage” or types – being mind-affecting, I assumed that being untyped was intentional here. What about lacing negative conditions in your mirror images, and then potentially affecting those that destroy the images? Yeah, cool! Or, what about making your mirror images bobby traps of negative energy? Yeah, these are very cool.

Editing and formatting are per se generally very good regarding integrity, attempting to tackle complex concepts beyond what we usually expect. In the details, the same can’t be claimed – I noticed both a few glitches, missing damage types, slightly odd verbiages, and an array of small hiccups. These, in a way, feel very much like they could have been avoided. Layout adheres to a nice two-column full-color standard, and the full-color artworks are impressive – excellent, even. The pdf comes fully bookmarked for your convenience.

Christen N. Sowards can claim one thing for absolute sure – he does not do boring. I have yet to see a book from his pen that does not attempt something that, at least in concept, makes me smile, and this is no different. Even after I’ve read more than 5000 Pathfinder spells, this managed to maintain a sense of being fresh and unique in a way I frankly did not expect. And the design-goals formulated in the beginning, of making spells that feel both properly occult AND give the classes some stuff that they do better than others? Heck yeah, resounding success. As a person, I really adore this little book. As a reviewer, I had to grit my teeth a couple of times – the book consistently almost gets high-complexity operations and the like done with pin-point precision, only to stumble in details. These usually do not break the rules, but they can generate ambiguities and represent wholly unnecessary imprecision in what would otherwise be an inspired book. Considering all of these, I frankly should round down, but then again, if you’re confident in your ability to add these small tidbits and make sure the small hiccups don’t adversely affect your game, then this is a surprising little treasure trove. As such, my final verdict will be 3.5 stars, rounded up for the purpose of this platform.

You can get the entire Book of Beyond-series here!

If you appreciate my work, please consider leaving a donation or supporting my patreon.