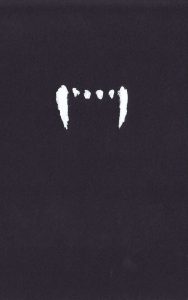 This pdf clocks in at 13 pages, 1 page front cover, leaving us with 12 pages – each of these pages is presented in a tabloid-style, so essentially you get two facing pages per side; the supplement also comes with a 4 page world-building prompt guidesheet. My review is based on the electronic version; while there was a limited edition print version, I don’t own it.

So, what is this? It is essentially a guided Session 0 cooperative world-building guide that helps you develop the world of Urazya in the incarnation suitable to your campaign.

As far as inspirations are noted, we have White Zombie, High on Fire, Kovenant, Nile, Cradle of Filth, Zeal & Ardor. Good taste, promising! Beyond that, the Castlevania games, and Vampire Hunter D – the latter is, by far, the biggest inspiration, and this, in a way, is the biggest weakness of the supplement, but I’ll get back to that later.

We begin with a promising introduction that will have the genre-savvy cackle: Essentially, we have a post-apocalyptic gothic setting, with the vampiric Noble Houses ruling all: Draghul, Karlok, Skarnstein, Várgori. Evil fey steal kids, serving the Unhallowed Court, and beyond cthulhoid things lurk. Okay, so world is pretty much screwed, got it.

Here’s the thing: If you’re looking for the Vampire D gothic, you won’t find it, because the post-apocalyptic struggle for survival is inimical to gothic themes; cosmic horror is similarly rather distinct from those themes, and once you enter monstrosities, things become rather thematically confused. Instead of thinking this as “Gothic” as a genre, consider it more in the sense of “gothic” as an architecture descriptor.

Particularly considering the Capital, or, as I’d like to call it: Bloodborne-land, if the Hunt actually wasn’t constant. The Borderlands are points of light and essentially outlaw/Grimm fairy tale county. In the Devastation Zones beyond, we have the science-fantasy/horror land. I *LIKE* all of these, and the pdf consistently presents summaries of aesthetics, prompts and leitmotifs, as well as several helpful world-building prompts.

There is an issue here, though: These sub-themes don’t gel together. They aren’t really fused properly. There is no connective tissue that bridges themes.

And honestly, the book isn’t that creative regarding its faction suggestions. Let me give you a few examples:

“A fraternity that crafts monsters from corpses.”

“A cadre of mystical gunslingers.“

“A sect of inquisitors obsessed with eradicating heresy.”

“A consortium of merchants and traders.”

That is NOT something any GM needs spelled out. Ever. This is basic as all hell, and boring at best.

And this frustrates me to now end, because the author can do much better!

“A cantankerous sage or hermit.”

That’s a non-entry if I ever saw one. Boring. Bland.

“A phantasmatrix adept at stealing dreams.”

That’s evocative. What’s a phantasmatrix? Does she use  Dominatrix-like techniques? How are dreams stolen? With one sentence, the mind’s aflame! Unfortunately, these genuinely inspired entries that showcase the author’s potential, are the exception, not the rule.

The highest density of the things that excited me, was in the section of one/two-word character-concepts: Absintheur warlock? Battle nun? Hexbride? Yeah!

Compare to “Drifter”, to “disciple” to “mercenary.”

A pet-peeve of mine: In spite of the vampiric aristocracy and the world going to s***, everyone’s totally egalitarian, and prejudices are rare. Nonhumans and mutants get full rights. Buahahahaha. Yeah right, that goes against EVERYTHING that creates a sense of threat of not belonging. I get it. Prejudice sucks. Heck, I’ve been spat on, insulted, etc. But dark fantasy and horror are efficient because we can engage with such themes in a safe environment. Particularly in such dark environments, playing against social prejudices is so rewarding. It makes a hero. When e.g. Geralt stand up for nonhumans in the face of prejudice, does that not ennoble him?

This feels like a cop out that makes the whole setting feel inconsistent.

And then there’s the language. Common’s spoken everywhere, but, you know, there are some isolated communities and ancient texts. Language barriers create a sense of estrangement, of the Different – a crucial aspect of horror. That this booklet drops. *sigh*

Finally, no good ideas are given regarding the gods. “Religion in Urazya is a mix of monotheistic religions, polytheistic pantheons, and esoteric spiritual paths.”

Editing and formatting are very good, I noticed no undue accumulation of glitches. Layout adheres, as noted, to a tabloid-style two-opposing pages-style, with one to two-columns per page. We get solid, hand-drawn b/w-artworks. The pdf has no bookmarks, but needs none at this length.

Damn. I wanted to like Jack Shear’s guided world-building. I’m the target demographic. I love dark fantasy, horror, post-apocalyptic stuff; I used to cosplay as D.

And that’s the problem. If you’re immersed in dark fantasy/horror media, this book has almost nothing to offer for you.  I got a grand total of 4 words (!!), yes, “words”, out of this pdf. These 4 words inspired me. But if you’re already a fan of the themes, this will not have much going on for you.

The intro was promising, but nothing comes together. The heavy lifting of blending the themes? You and your group will have to do that, and the pdf does a lot of bad concessions to D&D-standards that compromise its themes and rules the world operates under.

This booklet plays it safe, and horror can’t ever be SAFE.

Heck, even Ravenloft had the outcast rating! A frickin’ WotC-property has more cojones in that regard than this!

Anyways, for me as a person, this was a total dud of a booklet; even for the low price, I was utterly disappointed. I printed this before reading it because I prefer reading on paper, and seriously wish I hadn’t. For me, as a person, this is a 1.5 stars-dud. If you’re experienced regarding these themes, don’t get this.

As a reviewer, I can see this have some value for GMs and groups less immersed in darker themes and media. If you’re new to the wondrous worlds of dark spires, vampiric nobility and vile cults, then this might well be worth checking out. For you, this may be as high as a 4 star-booklet. My official verdict, will clock in between those, at 2.5 stars, rounded down.

If you consider my reviews to be helpful, consider leaving a donation, or joining my patreon here.