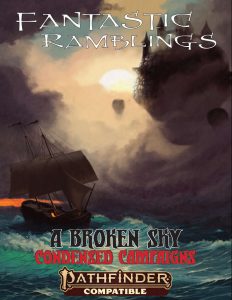 This book clocks in at 57 pages, 1 page front cover, 1 page editorial/ToC, 1 page SRD, leaving us with 54 pages of content. It should be noted that the book comes with a bonus booklet that contains 11 additional pages of content, making the total offering clock in at 65 pages of pure content, so let’s take a look!

Okay, so in order to talk about this supplement, I need to explain some of my personal observations about Pathfinder’s second edition: In contrast to PF1, PF2 limits design space of player-facing materials more, mainly because the math underlying the game is very tightly-wound – the design is so well-executed that there simply isn’t as much leeway. This design decision, however, when paired with the excellent base engine, also results in an unprecedented array of options for the GM or adventure author. What do I mean by this? Provided you understand the game, the engine lets you do pretty much almost everything, all without requiring that you introduce new custom systems to make them work. The design is holistic in that manner, and does not require quilt-like fixes left and right. This is the game’s biggest strength, and from a pure design perspective, PF2 may be the best-executed RPG I have ever seen. I maintain that PF2 has the potential to execute the best adventures I have ever read, to tell stories that simply wouldn’t work without a HUGE amount of houserules, etc. in other games.

This means that traditional design spaces are less exciting, while new design spaces are opened up. And in a way, this is what this book represents. There were campaign kits before for other systems, but they are, ultimately, more limited, and this book highlights very well what you can potentially do with PF2.

“A broken Sky” is a kit in a way, and showcases a clockwork world broken by a strange cataclysm of unknown origins; as such, we have high fantasy with steampunk elements as the theme, and items granting flight and similar magics are commonplace. Then, the book makes a design decision that was pretty much impossible in PF1 (or 5e, for that matter), as it would have made the math come apart. The world presented is one where there are no divine or occult spellcasters – yes, including bards, champions, etc. In PF2, this works. Healing items and magics are mad-made, as the gods died when the world was sundered; the dwarves, creators of the world, have left Temples as their Last Act, which allow for safe travels when aligned – otherwise, skyships and riverdrops are the common modes of travel, and druids, a last, tenuous connection to the world, remain the only class with healing spells and rituals.

Characters begin play at 3rd level, with 2 1st level and 1 2nd level permanent items, and 25 gp. Due to the sundered state of the world, and the prevalence of air travel, heavy armor is uncommon. Tehre are 5 custom ancestries – Humans, and Avalar, Chardram, Knomoi and Undyn. As you could probably deduce, each of these races is associated with one of the classic 4 elements; extra kudos here: These races are not just genasi/plane-touched rehashes. Undyn come in three particularly pronounced Heritage-variants (cresting, placid, thresher), which sport different HP, speeds, ability boosts, flaws, etc. The other races sport an analogue diversity, but have the heritages offer more conventional benefits – these heritages are in so far remarkable, as the avalar, for example, differentiate between those that lived when the world was shattered, and those that came after. Moreover, the design of the fully realized ancestries includes all the flavor-relevant details that make them feel like more than just a series of stats. Interesting: The fire-connected Chardram are actually Small, for example. The earth-associated Knomoi have a feat that lets them use a free hand to reduce the greater difficult terrain penalty. Rules-wise, e.g. bonus types granted by the variety of ancestry feats check out, and while there are a few potent combos, I noticed none that would break the game. There are a few minor nitpicks I can field – physical damage, for example, would warrant precisely noting that it pertains to either physical Strikes, or to precise damage types, but as a whole, the rules language is precise, with my complaints boiling down to nitpickery.

An interesting note: The skyship etc. angle is not realized with classic rules, instead acting as set dressing – to a DEGREE. What do I mean by this? From battery tubes to fuel blocks and buzz wing backpacks, the book does feature relevant items that influence combat in a way that makes sense, that allows you to depict the respective scenes without contradicting any rules for such scenarios that official Paizo channels may release. Lobbers for alchemical items like bombs in particular are exciting ideas that can easily be adjusted for proper skypirate swashbuckling action.

Okay, but there are 5 races, right? Well, humans are associated with Spirit as a kind of fifth element, and there is a 6th one as well – Void. And here is the thing that gets me most pumped about this. The supplement does offer a pretty exciting array of lore for the setting, and manages to walk the tight rope to offer ENOUGH to make the setting distinct and unique; on the other hand, it takes a cue from old-school gaming’s session 0 cooperative world-building exercises in that it does not prescribe a given answer to the BIG questions of the setting. Instead, this behaves in many ways like a combination of such world-building and standard lore presentation. Let’s take aforementioned sixth element, Void: One suggestion is that the element is required for the functionality of the world; the second option sets it up as an evil, entropic force – and then, there is, obviously, YOUR choice…which could be a combination of aforementioned, equally valid responses to said question, mind you.

These options, these answers to the setting’s core themes, are btw. not one-sentence throwaway lines – they are complex tenets, and the testament to how smart this presentation structure is, for all such combinations of the suggested replies make sense. This also pertains e.g. the Nightfall Lords that used Void to carve a trail of destruction, the secret of the temples, or the cataclysmic event of the Shattering, which sundered the world into the 7 shards, which btw. are mapped and explored in more detail herein as well. From Hadravel, the City of Books, to mysterious Urm and the Shard Sea, these locales breathe the spirit of high adventure that this book so successfully seeks to transport.

It should be noted that the pdf comes with a bonus pdf that helps world-building, as well as with some rules-questions – much to my pleasant surprise, an issue the pdf originally had was addressed here, and remains here, in spite of the core book having resolved it already in an update. I very much like designers taking responsibility like this. Anyhow, the bonus pdf has more to offer: We actually do get proper 11 backgrounds (like balloon skyfisher or eelman – come on, that’s awesome!),a s well as 5 pretty extensive, complex new items, including glide harnesses, properly codified five fathom ropes, and what about magical anchors that make a surprising amount of sense in how they work?

The world-building angle is btw. also further tied to the fiction in this bonus booklet and the original book, and brings up a whole new central leitmotif to the table – one previously implied, but not expanded upon. I’m not going to spoil its nature here; suffice to say, I really loved it!

Editing and formatting are very good on a formal and rules-language level. Layout adheres to a neat two-column full-color standard, with gears on the borders, as befitting of the supplement.  The interior artworks for the races are somewhat comic-like, but nice. The cartography is full-color and neat – no complaints there. The pdfs, both the main book and the bonus file, are both fully bookmarked for your convenience.

Jim Milligan’s “A Broken Sky” is an amazing build-your-own-campaign toolkit, and frankly not only the best-written book by the author that I’ve read so far, it’s also the best-designed one; it is not merely a guided “establish general leitmotif”-book; it is a guided tour of a fully realized and interesting setting that is set apart by having its central questions and core tenets up for your interpretation. In a way, it does the boring components of world-building for you, and lets you decide the big questions. You won’t have to worry about internal consistency here, and the author’s experience certainly shows an aptitude for ideas beyond the ideas of many GMs. Add to that the well-executed supplemental material, particularly the items, and we have a book that is very strongly tied to PF2’s strengths, showing new design spaces and paradigms and how they can be executed in a concise manner. In a way, this is a new type of supplement, far beyond all campaign kit-style books I’ve read so far. This deserves to be successful, this deserves to be checked out. Even if you’re just scavenging from the plentiful ideas and crunchy bits, this is worth the asking price.

This takes “making a setting your own” to the next level in a truly captivating manner. 5 stars + seal of approval. I want more – both for the broken sky, and for other worlds.

You can get this amazing little toolkit here on OBS!

You can directly support the author here!