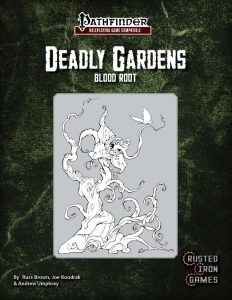 This installment of the Deadly Gardens-series clocks in at 5 pages, 1 page front cover, ½ page of SRD, leaving us with 3.5 pages of content, so let’s take a look!

All right, as almost always, we begin with a new magic item, which would be the hideaway log this time around: This item would basically be a twig that, on command, can turn into a moss-covered, hollow log, into which Medium-sized (or smaller) creatures can squeeze themselves. The item itself is concise in its presentation and has actually a second use: When uttering the command word again while inside the log, it doesn’t shrink, but instead detonates, potentially blinding targets nearby and also causing piercing damage to those outside the log. Slight problem here: there is no limit regarding the amount of explosions you can thus trigger: While not overly powerful, I am pretty sure that the item regenerating hit points while inactive in its small twig-size was supposed to cap this aspect somehow. Also problematic: The log has no weight even in its deployed form – this means that you can carry it around pretty easily – put a halfling sniper inside and you have a potent weapon. I am pretty sure that the deployed, massive version of the log was supposed to have a weight.

The pdf also contains 9 natural items: light-duplicating blindheim eyes that can be thrown as flashbangs; the alter self duplicating green hag wig; the shantak suit that helps fortify its wearer against the void between the stars; there would be lamia matriarch scales that can be added as power components to spells, causing failed saves to add minor Wisdom drain to the effects of compulsions. Stirge powder can help against poison, but does cause bleeding. Twigjack shafts can make arrows that burst into splinters, causing harm to adjacent foes on a failed Reflex save. Yeth hound fangs can be used in lieu of regular spikes, helping demoralization efforts. Xacarba runes can be used to make the covers of spellbooks, which nets 1/day access to Bouncing Spell sans changing the casting time or spell level, but only for a spell taken from the book. Not the biggest fan there, but oh well. Finally, there would be blood root vitae, which heals 1d8 points of damage and also duplicates lesser restoration (not properly italicized).

Now, the star of the book is obviously the critter, here the CR 7 Blood Root. The blood root can use sickening entanglement 1/day as a SP and is actually two plants: The conglomerate consists of a tendril network and the carnivorous predator. The latter sports a heart root, making it likely to regrow. Blood roots can move via earth glide through a symbiotic tendril network, which they may even share among others. The network also provides superior senses or the plant and blood roots can fire spray of thorns. All in all, a cool critter, though it does sport some minor hiccups; e.g. the CMD forgot the special size modifier for being Large and should be one higher. Unless I am not sorely mistaken, that’s not the only minor hiccup there – let it be known, though, that the plant can be used as provided.

Editing and formatting are good, though not perfect – I noticed a few minor hiccups, some of which pertain the rules. Layout adheres to the nice two-column standard of the series. The b/w-artwork provided is nice. Big kudos: The pdf comes fully bookmarked for your convenience.

Russ Brown, Andrew Umphrey and Joe Kondrak deliver an inexpensive file with a solid critter here. I wished the pdf did something more with its cool premise of two symbiotic creatures here, but yeah. As a whole, the blood root is a nice creature to thrown at your players. Not a mind-boggling one, but for the fair price-point, the pdf is worth checking out. Still, as a whole, I can’t round up from my final verdict of 3.5 stars.

You can get this plant monster here on OBS!