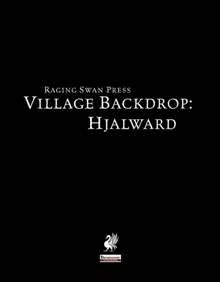 Now Hjalward is a change pace for the series, for Hjalward is not only the moniker of a village, but also of a vast defensive fortification, with vast watchtowers and flying buttresses, erected in times long past by giants…or some other strange civilization.

Nowadays, not even a tenth of this engineering marvel remains and the village of Hjalward is located around one of these last remaining defensive fortifications. The attentive reader will immediately realize here that Raging Swan Press has significantly streamlined the layout of settlement statblocks, making the formal write-up of the village actually less cluttered than in a default layout – awesome!

As always with the series, we receive magic items for sale in the market place, an array of rumors and events, information on local dressing customs and nomenclature – but this one goes a tad bit beyond that, also providing a kind of local geography and mythology, thus entrenching the village further in an evocative past.

A kind of frontier’s town of the coolest kind, the place is fortified and breathes a mix of frontier’s spirit/trading post atmosphere, coupled with an underlying sense of decay that is hard to achieve indeed. The augan, the wondrous watchtower at the heart of the village sure has captured my imagination -what do they guard against? How were they destroyed? If it falls, will it be the end for the settlement? Can the PCs keep it intact, perhaps reclaim a part of the splendor of the wall?

Hints towards Wolfsbane Hollow and the surrounding mountainsides and areas )hopefully!) hint at the cool things to come, and a sample bard finishes what can be considered an evocative installment of the series.

Editing and formatting are top-notch, I didn’t notice any glitches. Layout adheres to RSP’s superb, streamlined and printer-friendly 2-column b/w-standard. The pdf’s b/w-cartography (of which you can download player-friendly versions on Raging Swan’s homepage for free!) is just as awesome as I’ve come to expect from the series – it should be noted that the map’s quality is back to the superb standard we’ve come to expect and not on the slightly lower level of the previous installment of Village Backdrops. The pdf comes fully bookmarked and in two versions, one optimized for screen-use and one to be printed out.

Rife with roleplaying potential galore, suffused by an imagery that is truly iconic, Robert Brookes’ Hjalward breathes a spirit of epicness, of opportunity and adventure – sure, you can make this a minor place in your campaign, but just as well, you might blow this up to being an anchor of it or a central component of the things to come – in any way, Hjalward is awesome and deserves a final rating of 5 stars + seal of approval.

You can get this cool backdrop here on OBS and here on d20pfsrd.com’s shop!