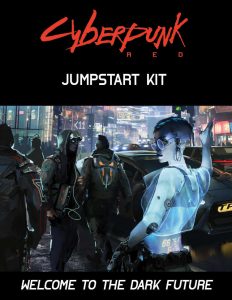 This review is based primarily on the massive boxed set of the Cyberpunk RED jumpstart kit; I have also consulted the electronic version; this review was moved up in my reviewing queue due to me receiving a physical copy of the boxed set for the purpose of a fair and unbiased review.

Okay, that out of the way, let us start!

In the archive of the electronic version, there is a two-page standee-pdf for paper minis…and much to my pleasant surprise, the R. Talsorian crew has not simply put a sheet of paper in the box – instead, the standees in the box are part of a THICK, sturdy cardboard. A single little press made them seamlessly pop out of it. Kudos for going the extra mile with a material that actually withstands the rigors of play. Moreover, 12 plastic feet for the standees are included –assembling of the paper-minis was easy-peasy: Put the standee in the foot, done.

It should also be noted that the physical boxed set includes two custom d10s, and four custom d6s, using the Cyberpunk RED icon as the maximum number, with each number sporting red circuitry. The dice are black with red numbers, and unlike many comparable dice, the red circuitry elements so far haven’t worn off, so once again, the R. Talsorian crew did not cut corners here. Kudos.

Now, one glimpse at the archive will net you a 12-page pdf of pregens: The front side of these sports a high-quality artwork alongside a background story, with the fully filled-out stats on the back in an already ready-to-play filled out sheet. In the physical box, these pregens are printed on glossy, high-quality paper – thicker, and obviously made to be handed out and used. Speaking of which: The boxed set also includes 4 full-color maps, all of which come with grids and plenty of details. One map depicts a street-corner, another a dust-choked street, the third an apartment complex, and the fourth a bar. In their physical iterations, these are also glossy paper, with each map the size of 2 regular pages, so tabloid format.

Speaking of which: The box contains a EZ Reference tabloid – 4 pages. 2 pages are the basic rules, 1 page is all about the netrunning rules, and the final page contains 3 NPC stats. In the electronic iteration, two versions are provided: A 4-page iteration for regular printers, and a 2-page version for printers capable of printing tabloid-size. Yep, all rules fit on two pages. (And in case you were wondering, this booklet is actually enough to run the game if you’ve understood it once. Two pages. That’s super-promising for the final game.

Final game? Yeah, this is not a full-blown iteration of Cyberpunk RED; instead, this is a starter kit, and I’ll rate it as such – much like e.g. Pathfinder’s Beginner’s Box or the LITE-version of the Witcher RPG, this box is all about providing the tools you require to dive into the game in every way. However, this book does not provide the tools for you to make your own, fully-realized characters. It is a starter’s kit. That being said, as far as I could tell, this is not, and that is important, a dumbed-down version of the game – which is a good thing. I am not a fan of learning a dumbed-down version of a game, only to have to unlearn it later, so kudos for this decision.

Okay, this out of the way, the system employed is an evolution of the Interlock system, and veterans of Cyberpunk should have an easy time getting into the game’s rules. The rules book included in this set clocks in at 43 pages (already minus cover, editorial, etc.), and in the physical iteration, is a nice, perfect-bound softcover with glossy, thick paper. But didn’t I say that the rules fit on 2 pages? Yeah, well, the rule book? It’s not just dry rules – it is not only a brief introduction of roleplaying games, it also explains the crucial aesthetics of cyberpunk. This is in so far important, as Cyberpunk 2020 was firmly routed in the 80s and their vision of the future; it was a vocalization of hopes and fears of that age…and now that we have arrived in 2020, rehashing these would have, at best, resulted in feeling, well…quaint.

This game does not do “quaint.” The game moves the timeline ahead to 2045, after the fourth corporate war, which saw a small tactical nuke go off in the center of Night City at its conclusion. The power-dynamics of the world have been thoroughly shaken by this catastrophe, and while some might assume a somewhat post-apocalyptic tint, I’d actually not subscribe to that. First of all, tech and construction can negate radiation; the detonation has catapulted dust into the air, tinting dawn and dusk in crimson shades. Hence the RED. This is a strong angle – why? Because Night City is inhabited, Because the mega-corps have fragmented, emphasizing a dog-eat-dog struggle to come out on top, a notion of the urban jungle. If anything, this reminded me of the fantastic dub-step-y metal-song Red Sun from Metal Gear Revengeance (btw.: That OST is the perfect Cyberpunk soundtrack…):

“Golden rays of the glorious sunshine
Setting down, such a blood-red light
Now the animals slowly retreat
To the shadows – out of sight

Those lines perfectly encompass for me the feeling of Cyberpunk Red. More so than the original book, the notion of the city as a jungle, as popularized in post 2000s weird fiction, can be considered to be the proper leitmotif for the game – and in such a world, everyone has an angle, and style is just as important as everything else. Not only is Cool an ability score, social combat/intimidation provides a massive debuff to those you beat. Cyberpunk is a mindset, and one that is conveyed as much via mindset, as via aesthetics.

The basic resolution mechanic used by Cyberpunk Red, is to add a Stat, the associated skill, and roll 1d10, then compare that with the DV (Difficulty Value) – if you BEAT the DV, you succeed. Combat is essentially opposed skill check. This, of course, results in an emphasis on ABILITY. If you are good at something, you might not even need to roll; if you suck at something, you’re vulnerable in that regard. Much like the Witcher RPG, this means that the RPG a) can be pretty deadly, and b) that your abilities matter more than in e.g. d20-based games. I can’t provide detailed analysis on the rules of the jumpstart kit, primarily because the rules here are intended for the pregens, etc. Netrunning is also covered, and before you ask, there are proper reasons for the by now quaint notions introduced back in Cyberpunk 2020 to now longer apply – as noted, this does not cater to quaintness, it knows no sacred cows. The tweaks made to the combat engine in particular are, as far as I could judge with the material presented and the playtesting frame I had, rock-solid, though judging such a system without access to the totality is an exercise in speculation – for now, it looks better than the 2020.

As a long-time Shadowrun fan, this should not exactly make me happy, considering how SR hasn’t exactly handled sweeping changes particularly well. And this is where Cyberpunk Red is genuinely superior, at least in my book.

You see, beyond the basics in the rules book (which btw. includes full explanations of slang), the box contains a second such book – the world book, which explains in a rather in-depth view how the world changed from the Cyberpunk 2020 status; this world book contains 50 pages, and is also a glossy softcover.

The world book is an example of the most efficient world-building I have seen so far in RPGs, period. In these few pages, the book not only presents an overview of how the world changed. It also includes the information how you stay out of trouble; how communication works, the weaponry you’re packing, stats for vehicles and their details, how you’ll score jobs, and the like. From food to media, this covers all. As a comparison: FAITH’s Tiantang is more than TWICE the size of this book, covers only one location, and failed utterly in answering ANY of these questions. I can see this new Night City. I can SMELL it. I love it.

I also love the commitment to “realism” –  yes, you can do amazing things with cyber-prosthetics, but there are limits. This is grounded, where Shadowrun, for a while now, has moved ever more towards the edges of science-fantasy, and the system supports and mirrors the playstyle – Cyberpunk RED provides a more pronounced unity of theme and rules. And that is coming from a long-term, die-hard Shadowrun fan.

The world book also contains one adventure, as well as several encounter outlines/mini-quests, supplemented by screamsheets, essentially tabloid-like headline articles that serve as great handouts. These encounters, and the adventure (which is, funnily enough, about keeping your apartment complex!), were surprisingly fun, but also represent the only aspect of this set that imho is not as newbie-friendly as it should be. There is no read-aloud text, and the material is pretty text-block-y. An experienced GM will have no issues here, but novices might have a harder time.

Editing and formatting are very good on a formal level – the sequence of the rules-presentation, to the extent they are relevant here, is precise, didactically valid, and does a great job teaching the system. On a formal level, I noticed a few minor typos (it’s instead of its, etc.). Layout is a HUGE improvement over e.g. the Witcher RPG – these books look slick, stylish, and awesome. The level of quality of the cover artwork is also retained in all of the copious interior artworks. These books are gorgeous. As noted, the production values of the box are fantastic. The pdfs comes with detailed, nested bookmarks that make navigation simple and smooth as well. The cartography is full-color and neat.

Okay, in context: The Witcher RPG, when I read it, felt like a mess; it was only when I played it, after having digested the somewhat labyrinthine structure, when I really got to enjoy it. Cyberpunk RED not only has superior production values, it also has superior precision regarding its rules, a smarter, more streamlined presentation – it is genuinely one of the most easy-to-get into games that is not rules-lite that I’ve ever seen. This is not only smooth in how it teaches the rules, it is smooth in how it teaches the aesthetics and adapts them for a new age, writing an aesthetic that is still indebted to classic Cyberpunk, and yet radically novel in its transition of the concepts to a new age, in its reframing of what cyberpunk means in this new era. Mike Pondsmith, Cody Pondsmith, David Ackerman, J Gray and James Hutt have achieved a remarkable feat here, and I am not engaging in hyperbole when I’m saying that I want this game right now. I want to play the finished game. I want a whole ton of books for that world. I am truly excited about this, and if the final book can maintain this quality, we might be looking at a #1 Top Ten spot. My final verdict will clock in at 5 stars + seal of approval.

One caveat, though: As noted above, this is the jumpstart kit; whether the final book can live up to this awesomeness remains to be seen. For a long-term game, this lacks the customization options and transparency regarding some rules details, obviously.

You can get this set as a pdf here on OBS!

The physical box only costs $30, and you can get it here on R. Talsorian’s store!