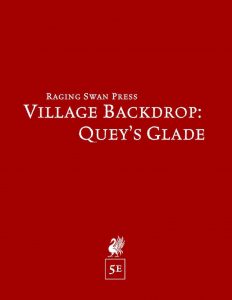 As always, the dressing habits of villagers and notes on village lore can be found for PCs of a more scholarly bent; for PCs seeking to socialize, there are 6 different whispers and rumors to encounter. It should also be noted that we get a fully fleshed out market-place section, one that has been properly adjusted to 5e’s rules and aesthetics.

There is another aspect to this sanctuary: As progress marches on and fell entities are deprived of their prey, the places where Quey’s Glade may draw upon are slowly diminished, one by one. Then again, this place in wondrous in the best of ways: Have I mentioned the awakened porcupine fighter? And yes, the NPCs noted herein mention the 5e-NPC stats upon which they are based.

The 5e-version of this settlement is very intriguing, in that it manages to retain the wonder associated with the other versions; while the book does not have the same sort of rules-synergy of PFRPG or the same wealth of strange laces to connect as the system neutral iteration, this one does have different, intriguing synergy effects, namely the connection with e.g. the intriguing 5e-fey-themed adventures out there.

Even in the ridiculously amazing Village Backdrop-series, this is an outstanding offering. While this one, so far, offers imho the least amount of synergy beyond the confines of its pages, that is due to the relative youth of 5e and what’s out there for the system, not on any shortcoming of this pdf. My final verdict will be 5 stars + seal of approval, given sans hesitation.