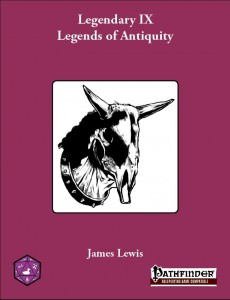 The ninth installment of Purple Duck Games glorious series of magic items that scale with levels clocks in at 32 pages, 1 page front cover, 1 page editorial/explanation of basic rules, 2 pages of SRD, leaving us with a massive 28 pages of content, so let’s take a look, shall we?

In case you’re new to this – legendary items as per this series are magic items with an extensive, well-written background story. These items feature prerequisites in order to unlock their powers. The items per se scale with the character level of the wearer, thus making for a neat way to combat the christmas tree syndrome – and thus see excessive use in my games. They usually have either a 5-or 10-step ability progression, with miscellaneous items usually getting the former, while weapons, armor etc. get the latter progressions.

All right, so how do we start? Well, we kick off with the perception-improving, movement-impediment negating battle-mask and then get a bladed bracer. What’s that, you ask? Well, first of all, an interesting off-hand weapon and secondly, a weapon that nets you a ton of feats when using the bracer – rather cool item-class! The headband of deathless devotion called vesture of Ahusye not only looks damn cool, it also gets an auto-resurrection capstone – yeah!

Or would you rather prefer a cestus that can punish the wicked, even pulverize them, even, a limited time per day, turn botches into successes? Yeah! Foes of humans may enjoy the new, lethal fanged bracers and their necromancy-effect duplicating tricks. More heroic people (of dubious origins) may enjoy a new punching dagger sworn to destroy all evil, devils in particular. What about a cold-iron flail that delivers some wildcard-feat style selections and counts as a size larger thanks to its kinetic enchantments? What about an elven ioun dagger of obsidian that makes for a neat tool not only for scoundrels, but also for casters?

Do the words “Ah, fresh meat!” still send a shiver down your spine? If so, the greatcleaver weapon class and its legendary version are just what you want to wield and not end on the other end off – yeah, the Diablo-Butcher-weapon-class has found its way within these pages. A Ninja’s new best friend would be the legendary bladed tonfa herein, studded with SPs galore. And if you ever thought that the boss of the first Kingmaker module required a proper item (or if you roll that way with the fey – erlkönig-style), then you’ll be happy to know that yes, a stag-antler studded magical mask can be found within the pages of this pdf as well.

Always wanted that damn cool lethal throwing axe? Well, you’re in luck, for one herein exactly fits that bill! Clerics will in the meanwhile learn to appreciate a new mace herein, which nets them quite an impressive array of channel feats, leaving precious feat slots for other choices. Characters more in line with the “God punishes, I kill”-notion of the sacred assassin will enjoy the new katar herein, while a new sickle and an ioun club make for tools for those more in line with nature’s forces.

You may also wield all that remains of a solar’s noble sacrifice in the form of a trident – one that may look evil, but which is suffused with divine power indeed.

Editing and formatting are very good, I didn’t notice any significant glitches. Layout adheres to a printer-friendly 2-column b/w-standard and each item herein gets its onw, neat b/w-artwork. the pdf comes fully bookmarked for your convenience.

Author James Lewis delivers a neat host of weapons, one themed mostly about slaying evil – with quite a few holy weapons herein, Wrath of the Righteous heroes will probably find quite an array of exotic, cool tools to destroy their dread opposition. (And it should be mentioned that I’d take PDG’s scaling legendary items over those introduced by Mythic Adventures any time of the day!) Overall, the items herein show interesting, versatile background stories and abilities -though the latter are a bit more on the conservative end of the spectrum, with many feat/SPs granted by the armory. While that is no way bad, personally, I would have enjoyed slightly more unique abilities – then again, that’s nitpicking at a high level. James Lewis did a fine job with this installment of the Legendary-series, one well worth a final verdict of 4.5 stars, rounded up to 5 for the purpose of this platform. Go forth and conquer evil!

You can get this neat collection of scaling magical items here on OBS and here on d20pfsrd.com’s shop!