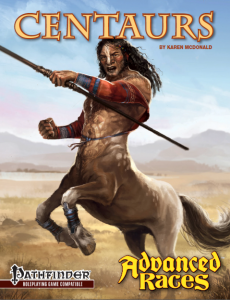 This installment of the advanced races-series is 17 pages long, 1 page front cover, 1 page editorial/ToC, 1 page advertisement, 1 page SRD, leaving us with 13 pages of content, so let’s take a look!

As has become a tradition with the series, we kick off by examining the customs, tribal lands and culture of the race in question and as has been the custom, the prose is glorious – author Karen McDonald explains different breeds, customs and lands and vivid prose, including sayings and teachings and a concise look at general psychology of the centaurs, their relationship with other races, all in the context of the delightful Midgard-setting – but can the rules back this up?

Centaurs get +2 to Str, Wis and Con, -2 to Int, are large, get a base movement of 40 feet, darkvision 60 ft., run as a bonus feat, count as having the mounted combat feat for purpose of skill prerequisites (but may not use ride to avoid damage to their equine halves), but strangely get +2 to ride-checks and attack rolls when charging. They also get +4 to CMD versus trip and -4 to stealth due to being quadruped and they also get +2 to craft (bows) and heal. I know. Here I go again. Soooo, as quadrupeds, do centaurs use quadruped rules to determine carrying capacity? Why do they have the ride-check bonus? Where is the size, height and weight-table? Worse: Undersized weapons ability, anyone? As large creatures, these centaurs, unlike those in the bestiary, can use large weapons. The variants are medium, so that doesn’t extend to them, but still.

Next up would be traits – Status-bonuses when interacting with fey are nice, but where things get weird would be with Born of two hordes-trait – this allows you to take to traits that are assigned to specific hordes – which per se is fine. It does specify, though, that this breaks the rule that one can take no two traits from one category. Yeah. Here’s the cincher – the traits universally lack categories – they all just are “traits”. While assigning (combat) or (faith) and the like should not overexert anyone, it’s still quite an oversight. On the cool side, we get a trait that offers the option to choose a raccoon-dog as a familiar or a dire weasel as an animal companion, with full stats for either…AND including the familiar bonuses/mini animal companion statblock! Two thumbs up, Mrs. McDonald!

We also are introduced to 7 new feats for faster movement, secondary hoof attacks or even a trample attack. two feats deserve special mentioning – one lets you increase casting time x2 in exchange for +2 to CL and the other lets you 1/day recall a spell you’ve already cast as a swift action, but only of a level -1 of your currently highest available slot. Both have in common that their wording is relatively concise, but also that they have the [magical]-feat-descriptor that to my knowledge, doesn’t exist. Still, not a reason to bash on these, even though one feat (+1 atk, damage, skill+ ability-checks and caster level checks in forested environements) feels like filler.

We also get 3 archetypes – the Green Witch (guess for which base-class) can increase or decrease the fertility and productivity of areas by pronouncing blights or blessings and instead of a 4th level hex, gains the ability to use the equivalent of summon nature’s ally,s caling up with her levels. On the nitpicky side – I assume they follow the default hex-rules, since both abilities lack information as to what action they require to activate. Explicitly stating that they count as hexes would have been prudent. A lost chance – blight/blessing SCREAMS Kingmaker-style kingdom-building rules – some precise rules for use of the abilities in that context would have been awesome.

Fighters may opt for the Oyun Wrestler archetype, who doesn’t get proficiency with shields and heavy armor, but instead improved unarmed strike and the new iron hooves feat at first level. They also get scaling dodge bonuses and may treat hooves as primary natural weapons and finally, they become excellent in tripping foes. Okay, if rather weak archetype – can’t see my players choosing this one.

Oracles may opt for the path of Redegiver, who may communicate with equine beings and perform a special kind of augury by galloping alongside equine hordes – while again, none too strong, a very interesting, flavorful archetype that drips roleplaying potential.

We also get 4 new spells – let’s start with the cantrip: Thundering Hooves lasts one round, requires a swift action, and increases your movement by 30 feet when charging. When taking the run action, it multiplies speed by +2, so x6 movement instead of x4. This is too strong for a cantrip. Also, the cantrip refers to itself as gallop in the text. The level 1 version lasts longer, but why cast it? A thrid spell extends to multiple targets and a fourth targets multiple creatures as well as allowing them to ignore difficult terrain.

We also get 4 new magic items, like enchanted apple brandy(!!!) and a GREAT belt – one that lets the centaur take human or equine form. For 10K, this is a MUST-BUY for all centaur PCs who want to climb ladders and be less handicapped when dungeon-delving. Depending on your campaign, I’d honestly haggle with the DM whether this couldn’t be dished out as starting equipment with teh character being in debt to…someone. (D’unhdunhduuuuunh. My players are too smart for that, but maybe you haven’t traumatized yours to that extent…)

Horseshoes of lightstepping (and their greater cousins) would also be rather awesome – they make the centaur lighter. Alas, we have no idea what a centaur weighs… We also get 4 rather awesome mundane pieces of equipment.

On the final page of the book, we get two variants of centaurs with the elf/deer-hybrid Alseids (+2 Dex and Wis, -2 Int, low-light vision, +1 DC against Old World-spells, trackless in woods, quadruped, spears/shortbow familiarity, +2 to perception and stealth) and the onager-based Oinotaurs, who get +2 con and either +2 Int, Wis or Cha, -2 Dex, lo-light vision, Gang Up as a bonus feat and count as having mounted combat prerequisite-wise, +2 to a knowledge skill of their choice and all knowledge skills as class skills, familiarity with short swords and halberds and the usual quadruped bonus versus trip and the increased speed.

Editing and formatting, while not perfect, are much better than in the last installment and overall can be considered good. Layout adheres to Kobold Press’ beautiful two-column full-color standard and the pdf comes with gorgeous artworks, though fans of Kobold Press will have seen them before. The pdf comes fully bookmarked.

So Centaurs are a tough sell on me as a player race, mainly because their size and anatomy poses problems with many obstacles that standard modules tend to presume – e.g. climbing ladders or crawling through tight spaces. The belt herein gets rid of these issues and for that item alone, anyone even remotely intrigued in the concept should take a look. It should also be noted that the crunch herein is free of any truly greivous, glaring glitches and that the wording is much more concise than I expected. I haven’t read any supplement by Karen McDonald before and she did a good job indeed, one well worth keeping an eye out for. That being said, the lack of an age, height and weight table is particularly irksome when taking a look at two of the magic items that address said weight-issue. I can’t fathom why the table wasn’t included. The second serious hickup would be that, beyond the centaur (and oinotaur) being slightly too powerful for my tastes, the former doesn’t get the undersized weapon quality. This is a serious oversight that should be rectified.

All complaining aside, this is the best advanced races-supplement since Ben McFarland’s take on the Darakhul, on par with the installment on Ravenfolk and well worth a final verdict of 3.5 stars, though, due to glitches, I’ll for now round down to 3 for the purpose of this platform.

You can get this neat supplement here on OBS.