A Day Out at the Executions (system neutral)

A Day Out at the Executions (system neutral) 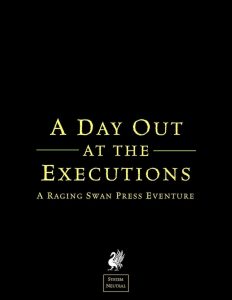 But I digress – if you need hooks for your players, a couple of them are provided, and then, the supplement features an overview of justice in the Duchy of Ashlar – the brutal punishments are described, and while not reveling in the realities, the descriptions are all about, well, executions. With classics like sawing and the breaking wheel included. The module is situated in the lavishly-detailed city of Languard, namely the low city, (see City Backdrops: Languard and the Languard Locations-series) and as such explains the history of the Traitor’s Gate, but the eventure remains pretty easy to adapt to other environments. The Last Chance tavern, with rules-less notes on NPCs and prices provided alongside two hooks certainly sees some serious business. The NPCs reference the proper old-school classes, just fyi.

Since an execution is an event, a lot of people will show up – as such, the eventure provides the fluff-centric write-ups for such NPCs and groups them by category:  We get, for example, write-ups for 4 beggars, including cripples to a madwoman and a charlatan. Nice: One of these individuals also acts as a possible link to Shadowed Keep of the Borderlands. Street vendors and entertainers, as well as other townsfolk, are provided as well, and the section is supplemented by a list of 12 rumors – handled appropriately sans rolling the dice here, with costs noted.

Creighton Broadhurst’s day at the executions (additional design by Amber Underwood) is a cool eventure, but does have a minor weakness: While I can’t well complain about being very lite on the rules for the system neutral version, the execution’s scene per se has no map – just a small excerpt from Languard’s map, and that doesn’t show the details, like the place where things happen, stands, etc. – and since there’s a decent chance at one point that the characters try to save someone or prevent the like, this makes that component of the supplement slightly less useful than it could have been. As such, my final verdict will be 4.5 stars, rounded up. A good and flavorful offering, but one that requires a bit of GM-work.