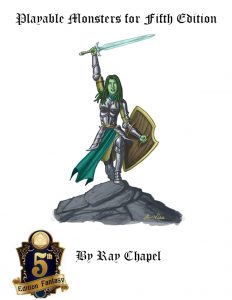 The 5e-version of Quasar Knight Enterprises’ take on playable monsters clocks in at 40 pages, 1 page front cover, 1 page editorial, 1 page ToC, 1 page of artist contacts, 1 page of writer info, 2 pages of SRD, leaving us with 33 pages of content, so let’s take a look!

So, after some general discussions on how to handle monstrous PCs and parties, we dive pretty much straight into the respective races, which cover a brief physical description, some minor information on society, relations with other races and alignment/religion preferences as well as how the race interacts with adventurers before diving into the respective racial traits – on a nitpicky formatting side, the pdf does not feature the full-stops at the end of the respective headers and here and there, a colon has snuck in, courtesy of the original PFRPG-version of the file. Similarly, it’s Ability Score Increases, not the singular. HOWEVER, before you dismiss this – the monster races presented herein, in other regards, very much exhibit adherence to D&D 5e’s formatting standards – from switches between “The *insert race name*” to “you”, the general transition works pretty well. Similarly, the races generally sport rather balanced attribute increase dispersal. Similarly, Speed ratings and other rules-language tends to be rather solid. As something that annoyed me, though, I should mention that the pdf fails to provide weights for the respective races.

The races provided in this pdf are the boggards, centaurs, chokers, dark folk, derro, doppelganger, dryad, true giants, gnolls, harpies, lizardfolk, medusae, naga, pixies, sahuagins and vampires. Now, one thing I feel obliged to mention is the following: I gave the PFRPG-version of this pdf a thorough thrashing since it fails in many, many regards. The 5e-version of this book, in contrast, is significantly more refined – perhaps it’s due to the relative simplicity of the rules in direct comparison, but generally, the races come off as rather balanced: Boggards, for example, are superb jumpers and swimmers, gaining advantage on both uses of Strength (Athletics) checks…though oddly, the Natural Jumper trait is listed twice. Still, that would generally constitute a massive improvement. Similarly, in contrast t PFRPG, there is, as of yet, no assumption of favored class options or alternate racial traits and similar supplemental material, making the bare-bones approach herein easier to stomach – still, if you expect extended pieces of flavor like in the PHB for the races, you’ll probably be disappointed by the relatively brief depiction herein.

On the downside, though, e.g. sometimes spells are not properly italicized, though SPs at least mention the governing spellcasting attribute and gaining of racial abilities at later levels is pretty smoothly handled as a whole. On the downside, there are some instances when ability formatting could be clearer – when e.g. an ability nets you advantage on the bonus attack while two-weapon fighting, mentioning that it requires your intent to do so before mentioning that it recharges on a rest would have made it a tad bit clearer – though, this time around, I’m admittedly nitpicking. Not nitpicking would be the missing DC of a dark folk subrace’s curse. And yes, there are a few, though not many, races herein that sport subraces. Somewhat odd – derro as a new dwarven subrace get a bonus action to attack with a net when fighting with a short sword and net…does that stack with two weapon fighting? No idea.

On both a plus-side and point of minor criticism – harpies no longer have an OP 1st level fly speed, instead gaining the option to glide, with 7th level providing proper flight. While the flight is magical in nature (and thus problematic), it can be envisioned as a jury-rig. Not complaining, mind you – just observing. That being said, I’m not a big fan of inventing a glide speed.

While overall, the races generally turn out to be relatively well-balanced, there are some examples that are slightly stronger than others…but there are some issues in the fine-print: E.g. a medusa’s gaze of stone’s damage lacks a damage type -which is a pity, for the ability is actually well-balanced in one smart way: The gaze only petrifies the target if it reduces the victim to incapacitated…which is pretty cool…but also takes a bit of the utility away. Why not simply go with a combined degrees of failure + multiple saves approach as the gazes of some creatures in the monster manual do? Also problematic – what about averting one’s gaze? Gazes usually allow that option, though this one does not…which I *get*, but it basically turns the *gaze* into an ability that is a gaze in name only.

As a personal nitpick, neither centaur, nor naga tackle the ladder-conundrum – players and GMs will have to resolve that on their own. On a positive side, the vampire race herein is pretty playable and balanced, though its children of the night ability could use an action…still, both sunlight and running water weaknesses are pretty solidly depicted. On a downside – the write-up mentions a “resting place” – but no mechanics for it. Or for a weakness of being staked. It’s basically the ultra-bare-bones approach to the subject matter. On a nitpicky part – vampire weaknesses already have established names in the Monster Manual – which interact with other rules…so I can’t, for the life of me, find any valid reason why the vampires herein don’t use that nomenclature as well. This is particularly odd, since one of the 4 feats herein is devoted to getting rid of just that (these racial feats btw. all lack prerequisite-lines). One feat grants you, among other benefits, the means to fluidly switch your domains…which is imho a bit much for a feat and will continue to grow in power the more domains are released. On the plus-side, see invisibility plus a cool ability that nets you advantage versus specific foes (elemental, fiends and fey, but strangely not celestials, for example) if you know their true names. The pdf sports two nice mundane items, one for breathing underwater and an item that temporarily helps versus light blindness, but oddly not sunlight sensitivity.

Editing and formatting are okay; while there are several formatting glitches and minor deviations from the standard, for the most part, these do not cripple the pdf. Layout adheres to an okay 1-column full-color standard with a blend of full-color and b/w-artworks – they are okay, but nothing to write home about. The pdf, annoyingly, has no bookmarks, which renders navigation annoying.

Ray Chapel’s second shot at the races herein fares better than the first; while the fluff-component of the racial depiction very much still follows the formatting of the PFRPG-version, the 5e-crunch ends up being better than the PFRPG version’s crunch. Due to 5e’s relative youth, there simply aren’t that many alternative rules and the like to take into account and the balancing of the races generally feels more sound. Unfortunately, at the same time, this pdf does stumble quite a few times regarding the finer details of 5e’s chassis with needless deviations from already existing abilities and similar hiccups. That being said, as a whole, this still remains pretty functional and should be considered an okay, if not mind-boggling purchase. If the concept strikes your fancy, you may get some mileage out of this, though sticklers for the details may be upset at some of the aesthetic glitches. Similarly, like in the PFRPG-version, if you expect racial fluff, compelling cultures or the like, you won’t find that here. Still, in comparison to the original, this represents a significant step up. My final verdict will clock in at 2.5 stars, rounded up to 3 due to in dubio pro reo.

You can get these races here on OBS and here on d20pfsrd.com’s shop!