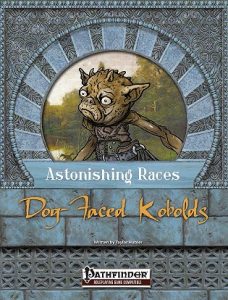 As in the installment on gripplis, we begin this supplement with an extensive amount of fluff that properly sets up the race – and yes, this basic set-up divorces kobolds from the dragon-angle, so if that is what you’ve been looking for, it’s a nice alternative. Takes on alignment, nomenclature etc. are covered.

Racial stat-wise, dog-faced kobolds get +2 Dex and Wis, -2 Int, are Small goblinoids witha base speed of 30 ft. and gain darkvision 60 ft., scent and the swarming ability, meaning that two can occupy the same square. They also get +1 to Stealth and Survival and may use said skills sans penalty while moving 20 ft. Overall, this makes them a pretty solid race on par with core and not a penalized issue like the default 5-RP-kobold. (though playing such a character has its charm!) Age, height and weight tables are included and do not deviate from those of the standard kobolds.

The pdf also includes a significant array of alternate racial traits for your perusal – hatred versus gnomes, Beast Trainer, a 1d3 bite (As a cosmetic complaint: This one’s not noting damage type, but gets, and that’s more important, primary/secondary classification right!), a rash-inducing skin, better initiative or tripping…some cool customizations here. Similarly, better darkvision at the cost of being automatically dazzled in bright light can be found. And no, I did not list all of those.

“Wait”, you’ll be asking, “where’s the dog-faced aspect coming in?” Well, that would be via the racial heritages. These basically constitute alternate racial feature-packages: Golden Champions get +2 Dex and Cha, -2 Int and +1 to AC and Ref versus larger foes instead of swarming. Flat-faced kobolds get +2 Con and Wis, -2 Int and +2 to select skill as well as Craft (traps) and Stealth as class skills instead of ambusher. Seaborne kobolds get Str and Wis +2, Int -2 and a reduced speed of 20 ft, but +1 Profession (Sailor) and 10 ft. swim speed instead of ambusher. The house kobold, finally, gets Dex and Int +2 and Wis -2 as well as proficiency with snare poles and nets instead of swarming. These packages universally are balanced, solid and I see no issues with them.

The pdf, as the first one, also contains a TON of favored class options: And unlike in most publications, you actually want to read them for more than the mechanical benefits, as they have some nice fluff that grounds the class in the context of the race. The favored class options, just fyi, are VERY extensive and cover the ACG and Occult Adventures classes as well as the classics. Mechanics-wise, there also are some uncommon choices: More channel damage to creatures caught sans Dex-mod, for example. Interesting and fitting. Slightly weird, though: The format is slightly inconsistent: Usually in these Astonishing Races-books, you get the flavor in plain text, the mechanical benefits in italics. The bard lacks the italicization and Shaman and Slayer lack the flavor-text, which is something that should probably have been caught – their absence is apparent at a single glance, the rules-text there, obviously, not italicized. I’m not complaining hard here, mind you – just stating that this inconsistency wasn’t necessary.

The pdf also provides racial archetypes, the first of which would be the Guerrilla Leader (Brawler), who gets proficiency with simple weapons and thrown weapon fighter group weapons and light armors. They may use Brawler’s Flurry with spears and thrown weapons, but not monk weapons or those from the close group. This ability does NOT grant Quick Draw (erroneously called “Quickdraw” here), which means that, for full functionality, we have a feat tax in the ability. It should be noted that pretty much all follow-up abilities of the archetype build on the concept of swarming, so that racial trait is locked in as well. The unique shtick of the archetype, just fyi, is entering the space of a creature as a quasi-combat maneuver, thus causing both the brawler and the creature to receive the entangled condition. Later, they can drag allies into the same space, which is pretty funny in my mind. This is kinda cool in theory, but in practice less useful, considering the archetype pay for the scaling improvement with maneuver training and the awesome blow abilities. Additionally, it leaves me with the question whether e.g. single-target effects that move one target in the square now move all three or not – since moving through squares occupied by hostiles is problematic. Basically, this is a cool idea, but needs some clarification – as written, it is a can of worms waiting to be opened. Using martial flexibility for teamwork feats is interesting, though.

The second archetype, the trapster rogue, is, you guessed it, a trap specialist – relatively nice: The archetype has a couple of rogue talents with which he can steal portable traps and even add the effects of select rogue talents to traps and add additional triggers. Not bad, but neither too novel – and some sample weights for traps that are carried around would have been useful for the GM.

The pdf also sports a selection of mundane items – from bird netting and feed to territory markers in 2 variants, trapped cages and whistle traps, the selection here is solid.

The pdf also sports 5 racial feats: Expert Trainer allows for the quicker training of animals (and is named like a Paizo feat that does something completely different), False Trail lets you put down, you guessed it, a false trail. Hidden Ambusher is a sniping feat for moving from concealment to concealment, while Swarming Expert and Swarming Sacrifice provide means to exempt kobolds from AoOs of foes and 1/day force a foe to roll twice, take the lower result and hit your ally. The feats range from useful to should have been a feat-use to, in the latter case, should scale regarding daily uses – 1/day reroll when having a kobold share a square with you may be cool…but on its own, it’s not worth a feat.

The pdf also sports 4 magic items: Scepters of Subject Summoning allow you to whisper into them to have minions, cohorts or followers hear your message. Pricey, but an item that, due to lack of range limitations, can be very useful…or at least flavorful for the villain. Incense of Creature Location lets you determine the distance and direction of creatures or subtypes. Swarm Collars net animal companions the swarming ability and allow them and their master to be considered flanking when attacking the same foe from the same square. Wild Growth Grit can make difficult terrain…or even impassable terrain; it can also be thrown to ineffectively entangle targets. As a nitpick: Imho there should be a work-intense way of clearing impassable terrain – I can’t see overgrowth withstanding a meteor swarm and retaining its impassable nature…then again, at 10 K and with only 10 applications, this is a costly means of delaying pursuers and one mostly appropriate for campaigns with a somewhat fairy tale style bent.

The pdf closes with a massive dressing table of 50 random dog-faced kobold features: From loving the moon and sometimes howling at it to considering oneself to be a miniature worg, hiding from everyone…or worshiping the squirrel lord, this table had me smile, drips with humor and roleplaying potential and ends the pdf on a high note.

Editing and formatting are good, though not perfect – there are some hiccups among the finer rules-interactions and, as mentioned above, some minor formatting inconsistencies and typos – not much, mind you. But they can be found. Layout adheres to Fat Goblin Games’ beautiful 2-column full-color standard for this series and the pdf comes with bookmarks. Artworks are nice and full color, as we’ve come to expect from master Hershey’s company.

Taylor Hubler’s dog-faced kobolds are a nice alternative for the default kobold-PC-race: While generally, one could conceivably blend the two and not lose too much, it’s nice to see a 10+ RP variant of the kobold. The alternate racial traits are varied and fun and the subtypes similarly make sense, with none being overpowering -the base race material herein is suitable for even low fantasy campaigns – which is a good thing in my book. As in the first Astonishing Race-pdf I reviewed, I was positively surprised by the favored class options in this book.

A more mixed bag would be the archetypes and feats – both vary in potency a bit and while I like the swarming-trick as such, it also opens up a couple of issues in the math and rules-interactions: Special size modifiers, really big foes, interaction with movement forcing effects…While these instances are rare and the rules that are here are concise, I still consider that component problematic. On a plus-side, the alchemical and mundane items are flavorful and the dressing table at the end is gold.

How to rate this, then? That depends – if you’re in it for the feats and archetypes, you probably will be a bit disappointed. Similarly, if you wanted a more thorough emphasis on the dog-aspect or more variety there, you may end up wanting more diverse heritages and/or more “doggy” traits and tricks. This pdf will also not blow you away with crunch innovation…but that isn’t its goal in the first place.

If you were looking for a balanced take on the kobold on par with core races and a slightly different, generic, yet sufficiently distinct fluff that still feels “koboldy”, then this may well be for you. All in all, I can see purchasers either considering this a 3 star or 4 star-file, depending on what they’re looking for and how one weighs components. Since I really can’t decide, I will settle on a verdict in the middle – 3.5 stars…and will round up due to my policy of in dubio pro reo. I can see people enjoying this book and considering it good, even though, personally, the crunch didn’t blow me away.