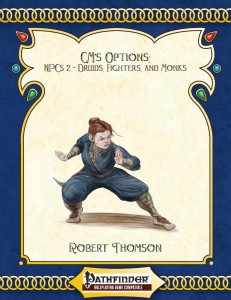 This installment of the GM’s Options-line is 20 pages long, 1 page front cover, 1 page editorial, 1 page SRD, leaving us with 17 pages of content, so let’s take a look!

Much like the first installment of the series, we get statblocks in this pdf, in 3 different level-ranges -as 1st level, as 5th- and level 10-incarnations. Much like in the first installment, we also get advice for each character to integrate them into the upcoming Porphyra-campaign setting by Purple Duck Games as well as sample boons his respective incarnations may provide to PCs if they befriend him.

The first character would be Connaghyn Halfhand (so nicknamed due to having lost some fingers in a fight with goblins). No animal companion stats accompany Connaghyn and mechanically, he isn’t that interesting, but the druid is rather interesting fluff-wise, at least.

Corra Greenthumb, a halfling urban druid is next up and makes for an interesting, benevolent ally with one ear at the heart of a given city’s gossip as well as a competent herbalist.  The Half-elf Sherdan Silverblade, a mobile fighter and moderately capable fast-talker that is particularly good at dirty fighting makes for a nice contrast with the next character: Dotha Hearthstone, a female unbreakable fighter who is essentially a woman who has vowed to never marry or produce children as a kind of dwarven battle nun – nice.

Brother Nadir is a half-elf Martial Artist Monk who is all about record-keeping and may also provide access t his monastery’s library and finally, we get Kokachin, a halfling Ki Mystic Monk depicted on the cover. She is also mechanically perhaps the most interesting of the characters. It should be noted that each character has the traits used in the creation listed as well for your convenience.

Editing and formatting are good, though not perfect – we have minor glitches like e.g. a header of a trait that is purple when it should be simply black and bold – nothing too serious, though. Layout adheres to PDG’s 2-column standard and each character comes with a b/w-mugshot, though you’ll know them all from old e.g. Raging Swan publications. The cover is nice and the pdf comes fully bookmarked with nested bookmarks.

This collection of stats and characters is better than its immediate precursor – the characters feel more unique, utilizing some archetypes and coming with more interesting fluffy backgrounds that make one actually want to use some of these characters. That being said, the pdf’s crunch still feels not particularly exciting, with the respective builds being very linear and not particularly complex. In the end, if you want some straight builds, you can’t go wrong here, but if you want some statblocks that are a bit more complex, then this is not the pdf to deliver.

Over all, this pdf is a nice collection of characters/stats, but simply is nothing out of the ordinary – no PrCs, no complex builds etc. – instead we get rather vanilla builds. Nothing wrong there, but also not enough to make me truly recommend this.

My final verdict would hence clock in at 3.5 stars, rounded down to 3 for the purpose of this platform. If you want some vanilla stats, take a look!

Want to take a look at these characters? Here you can on OBS and here on d20pfsrd.com’s shop!