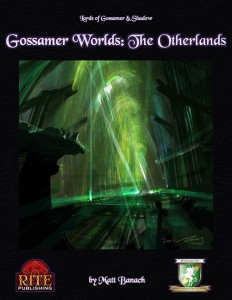 This installment of the evocative Gossamer Worlds-series clocks in at 18 pages, 1 page front cover, 1 page editorial, leaving us with 16 pages of content, so let’s take a look!

So, we begin this installment of the Gossamer Worlds-series with a warning – the theories herein are considered heresy by the established Lords and Ladies. You see, among the vast plethora of worlds and realities accessible, or so goes the hypothesis herein, there are some that may be considered…semi-sentient. Or at least “alive” in the broadest sense that the reality grows…like a plant…or a tumor. From a seed of contact, a chrysalis springs, ultimately leaving only a husk reality behind – or so goes the hypothesis.

You see, the otherlands constitute a kind of template, a kind of change – the reality does not overwrite completely a given world, but changes it into something creepily uncanny. The pdf uses a combination of “fey” and “alien” to describe the phenomenon and I am inclined to concur. Denizen-wise, we receive information on a few of them – the shining ones, which may or may not be the origin of fey myth; the Umbra-touched scattered ones and the hungry ones, which may be the origin of ours fear of giants, man-eating ogres and the like. The most powerful agents of the otherlands, though, remain the emissaries – we receive the full stats of such a being, the disturbing lady featured on the old cover. Finally, following the theme of otherness, doppelgängers are covered – spirits that may assume the guises of others, further cementing the theme of something subtly wrong with reality.

From Tír na nÓg to the underworld, some examples are provided herein as well and, as always, we conclude this brief sojourn into the weird with a list of the world’s properties and advice on how to use it.

Matt Banach’s Otherlands resonate with me – you see, neither jump-scares (which just startle), nor more traditional horror tends to do it for me. I’m not afraid irl of physical confrontation, nor of accidents, flights, water…you get the idea. The imagery of a raindrop falling in reverse, vanishing in the clouds? That’s the stuff my nightmares are made of I still consider Koji Suzuki’s Edge to be one of the creepiest books ever – what if Pi stops behaving like it ought to? …You may now resume laughing at me, but to me, this wrongness is the stuff of my nightmares.

Otherlands taps into this type of uncanny wrongness and does so in a great way…but at the same time, I think it does not follow through with its awesome concept – so, you have this invading reality…where are the modifications on how powers, perhaps even Umbra and Eidolon, work? Dissolutions of a Lords’/Lady’s powers? Essentially, this book provides a seed from which one can craft more and it does so admirably. At the same time, it falls short in that it does not provide a concise means to have these effects provide mechanical repercussions beyond the inspired fluff.

My final verdict, hence, will clock in at 4 stars – a conceptually awesome pdf that “only” manages to be good on its own and needs the reader to come fully into its own.

You can get this nice installment of the series here on OBS and here on d20pfsrd.com’s shop!
Endzeitgeist out.