The Demon Shaman Base Class

The Demon Shaman Base Class 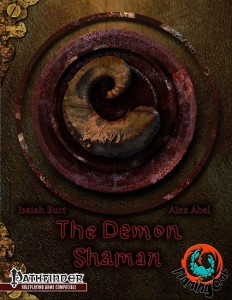 This base class clocks in at 14 pages, 1 page front cover, 1 page editorial, 2 pages of SRD, leaving us with 10 pages of content, so let’s take a look!

Demon shamans as a class need to be non-lawful, non-good and get d8, 3/4 BAB-progression, good Fort- and Will-saves, 4+Int skills per level and proficiency with simple weapons, but not with any armor – they are subject to spell failure chances when wearing armor. Demon Shamans gain spontaneous spellcasting of up to 6th level, but learn all spells from their very limited spell-list, which focuses on anti-good-alignment, chaos-based trickery and summoning. The class begins play with Eschew materials as a bonus feat and 2nd level provides DR 1/cold iron, which increases by +1 every 4 levels thereafter. Similarly, 5th level provides +1 natural armor, which increases by +1 every 3 levels thereafter.

At 8th level, he can, as a full-round action, call forth dretches that remain for 1 hour/level or until dismissed, +1/day every 5 levels thereafter…though the pdf botches the wording there: It states “Every 5 levels” instead of “Every 5 levels thereafter” – still, you hopefully know what’s meant. 9th level provides a babau cohort at -8 levels and 17th level allows the shaman to temporarily gain the babau’s resistances, SR, immunities and slime – though it fails to specify activation action and whether the cohort needs to be currently alive. The capstone is a demon apotheosis with wings that fails to specify maneuverability.

The class does have a selection of talents, so-called demonic morphs, the first of which is gained at 3rd level, +1 every 3 levels thereafter. Unfortunately, we have a slight issue here: The ability specifies all of them to be Ex, when several clearly aren’t. Extra spell-slot? All right. Claws? Got ya. 1/day charm as an SP…well, that contradicts the Ex, though it at least specifies the SP. Where things get problematic is via the per se well codified, scaling teleport – 5 ft. per level, requires line of sight, counts as movement…all right. I *assume* the teleportation does not take difficult terrain into account for this purpose, but what irks me here is that is, as written, is EX. Not SP or SU, Ex. It’s not even a conjuration [teleportation]-effect. This means it can’t be hampered in any way, which is pretty nasty.

The class does sport favored class options for the core races as well as dhampirs, gnolls, kitsune and tieflings. The pdf also sports no less than 10 archetypes for the class: Babau Masters trade DR for better social skills and get a slightly improved cohort at the cost of the dretches and may elect to instead to grant the morphs to the babau. Doomed Shamans get favored enemy instead of DR, replace soul bind and dretches with dimensional anchor and get a paladin’s divine bond weapon instead of the cohort, with the apotheosis sporting a good theme. The spell-list is also modified. The plague shaman gets plague-themed spells and displays outward signs of disease sans the consequences. He also gets a rat-face morph and a fly-like apotheosis (which states maneuverability, oddly). Servants of the Rakshasa Lord are subtle charmers that receive Charisma-increases instead of DR and natural AC and get a rakshasa-themed apotheosis.

Shamans of the Apocalypse can get bisected lower arms – at the cost of three demonic morphs, these can be made fully functional…which is problematic: 4 arms…so can he cast two spells? I assume no. What about main hand/off hand? This needs clarification. A second morph grants a tentacle secondary attack. Instead of a babau, the archetype gets a shoggti qlippoth cohort and appropriate ability-sharing – though, once again, I don’t know the activation action or whether the demon needs to be alive, adjacent, anything, really. The apotheosis also manages to get the maneuverability right. The shaman of Baphomet is locked into horn morph “at 1st level” – which is impossible, since 1st level does not offer a demonic morph. The morph increases base damage by one die-step. The archetype also gets a minotaur cohort and an appropriate soul bind…which, again, does not work as written.

The Shaman of the Nine-tailed Fox is locked into manifesting fiery fox tails as the 6th level morph and gets a fire elemental cohort at -7 levels. The soul bind still doesn’t work for the archetype and the capstone refers to a bite attack that the shaman doesn’t necessarily have unless he’s taken the morph – which is jarring. The Shaman of Orcus gets, obviously, access to animate dead and a morph that increases Con by +4, decreases Dex by 2 and halves land speed. This one works. The Shaman of the Ravager gets access to haste and receives a lower body of a worm as the 6th level morph…as always, any repercussions regarding jumping, ladders etc.? This nets also constrict. Cohort-wise, he gets a death worm at -7 levels and the soul bind still doesn’t work. The apotheosis provides the worm-that-walks-template. Neat!

The final one would be the shaman of vampiric blood, who is locked into fangs at 3rd level and may conjure forth bat swarms instead of dretches. 9th level provides an Su-variant of dominate person instead of the cohort, which is pretty neat. 17th level provides beast shape II (dire-bat only) and gaseous form as atw-ill SPs, the latter of which is not properly italicized. It should also be noted, that much like other components of this pdf, the ability-class SP is not featured after the name of the ability, but only in the text, which, while it does not impede the functionality, is a deviation from presentation standards. The final vampiric apotheosis is okay, though the benefits, at this level, are frankly negligible.

The pdf also provides 9 feats: A high level feat requiring 5 morphs grants acid, fire and electricity resistance 10, for example. Somewhat OP if DR matters in your game, as it does in most: Natural chaotic weapons, available at level 1. +2 Str, -2 Wis, +5 ft. movement rate is interesting and darkvision 60 ft. as well as rolling twice to perceive invisible foes is okay. The obligatory extra morph is there as well. A means of enhancing soul bind is here, though, as the base ability doesn’t work…well. Adding a poison to demon morphs is interesting and increasing the damage of the tail isn’t bad either. Scaling Diplomacy bonuses tied to morphs are also okay, if pretty weak.

The pdf closes with two sample characters with brief background stories – one at CR 7 and one at CR 15, the latter of which has the plague shaman archetype and full stats for his babau companion. The pdf closes with the absolutely stunning, single one-page artwork of the pdf – and it’s glorious.

Editing and formatting are good on the formal side, but rules-language and particularly ability-formatting is pretty flawed, to the point where the latter unfortunately bleeds into the text of the class and the ability to play it sans ambiguity. Layout adheres to a nice two-column full-color standard and, as mentioned before, the artwork is glorious. The pdf comes fully bookmarked for your convenience.

Isaiah Burt and Alex Abel have crafted a per se cool class – the demon shaman is an interesting mix of the natural armor-gaining beast, support spellcaster and pet class. The content herein isn’t bad, even though a bunch of the archetypes basically are filler and could have used more unique tricks instead of very minor modifications. Worse is that this almost could have been a class I can praise – most components are balanced quite nicely and playtest did show that the class and its options can be considered balanced. However, at the same time, the pdf is, pardon my French, sloppy in some cases: Missing maneuverability here, missing activation action in a key class feature there…the precise, final refinement is missing…which is particularly galling since the class features themselves are rather simple and do not require difficult wording or innovations regarding rules-language. The errors herein are craftsmanship errors a good GM can iron out – but the designers should have done that. The class works in play and can be fun – but it does require GM-calls and sports some blemishes…and I can’t ignore them. My final verdict hence will clock in at 3.5 stars, rounded down to 3…at least until the easily fixed glitches are gone. if you don’t mind such problems, round up instead.

You can get this pdf here on OBS and here on d20pfsrd.com’s shop!
Endzeitgeist out.