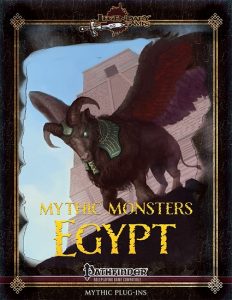 We begin this pdf, as has become the tradition, with supplemental material – which, this time around, would actually be mythic upgrades for two class options: The first would a mythic modification of the archaeologist bard archetype – though, to nitpick, the wording of some class feature could be a bit of streamlining – one ability, for example, notes that the bonus granted caps at +5 at 22nd and +6 at 27th level – since the latter obviously is the intended maximum, the previous assertion that the 22nd level is the maximum makes less sense. A relic regarding precise pages can also be found, with “XXX” denoting a placeholder that awaits the reference in the mythic hero’s handbook. Other than these gripes, the mythic adaptation of the archetype is solid. Secondly, there would be a take on the living monolith that significantly expands its flavor – not only are the SPs codified in a tight, mythic upgraded manner, even classics like stability and the Ka/ib-stone abilities gain upgrades and calling forth mythic sphinxes is pretty cool as well. No complaints about this one!

But, ultimately, we’re here for the creatures, right? Well, we begin this book with the Ahkhat at CR 5/MR 2 – these beings have no true body, instead deriving its form from the structure inhabited, which also provides them with a means to perform devastating hit and run attacks. Their slams can turn victims into bas-reliefs through which the entity can observe its victims. Sheer brilliance – they can assume trap-forms and also sport cool prose via their keystones – a superb boss/puzzle creature to face in the best old-school tradition.

At CR 12/MR 5, the crocodile skull-headed cursed king, lavishly rendered in a gorgeous full-page artwork is no less awesome – with a nasty dying curse, an aura that can dominate the weak-willed and means of crippling the healing options of a party via channel energy, they are glorious – particularly since worshipping these false prophets can increase their power.

The Werecrocodile comes in two iterations – a CR 4/MR 1 base form and the CR 11/MR 4 brawler 9 that further increases the potency of these dread adversaries. While mythic lycanthropy has been covered in its own mythic mini and the mythic monster manual, the required rules for MR 4 lycanthropes are duplicated herein for your convenience. These rules are great, though personally, I still maintain that separate bloodlines/ability-arrays for lycanthropes of different breeds would have been a cooler way than Paizo’s relatively bland streamlining of lycanthropy. Then again, I can’t fault this pdf for this conviction, but still am left with the feeling that mythic upgrades would have been a cool way to further customize werecrocodile and set them even further apart.

The CR 7/MR 3 mythic maftet gets the proper, full-blown upgrade we’ve come to love from this series – beyond upgrades of signature tricks, storing spells in its tattoos, mythic power-based additional options for the raptor dive and the option to steal hearts (!!!) from creatures render these guys as awesome as their mythological contemporaries and make this the definite incarnation of the creature for me.

At CR 14/MR 5, the pharaonic guardian can be bound to structures exceeding its limit, gains an immediate action curse, proper magical equipment and it can intrude upon thoughts of trespassers. Better, they can animate the objects they were supposed to guard and fire lines of negative levels-bestowing blasts.

The scarab beetle swarm at CR 4/MR 1 is a great example of good mythic vermin/animal design – function-oriented, yet deadly: attuned to the taint of the tomb, these scarabs are particularly deadly. The CR 5/MR 2 mythic version of the Sha not only gains a gefuddling gaze, its sandstorm also is more deadly and suffused with electricity…and yes, the disease gets an upgrade. Nice, if a bit conservative upgrade of the base creature. Then again, at +2 CR/+1 MR a sacred variant is provided that can smite unbelievers – including a mythic variant of the Step Up feat.

Obviously, no Egyptian-themed monster-collection would be complete without sphinxes – at CR 11/MR 4, the androsphinx gets no less than three unique riddle-based abilities that allow for control over fate, pose a riddle pertaining spells, which unanswered, allows them to duplicate them (AWESOME blending of metagame and game) or basically use a rock-paper-scissors-like ability – really a huge fan of this one – it’s unique and the blending of riddles with game-mechanics makes the sphinx stand out as simply awesome. And yes, the unique roar of the androsphinx receives a mythic upgrade as well.

At CR 9/MR 4, the criosphinx gets a similarly superb upgrade – playing bowling with the victims of its gore, consuming wealth – very cool. The old flavor of them being susceptible to the wiles of leonine creatures also receives the much overdue mechanical representation here, returning the creature to the unique identity it once had. The CR 6/MR 2 Hieracosphinx fall a bit by the wayside in comparison to these two brilliant sphinxes, though the mythic power based shriek-enhancer and the option to make its shadow a tool for rendering foes shaken is cool. At the same CR/MR, the uraeus is always an oracle and gains all-around vision and is practically impossible to pin down.

The final creature herein would be the CR 17/MR 7 Ammut – an unsettling, powerful magical beast blended between lion, crocodile and hippopotamus that not only has a conical cone of fear, it can tear out the hearts of the living, shed its fluid skin and generate a blend of a powerful heartbeat and roar that causes devastating damage. Instruments of divine judgment, these creatures are immune to abilities based on alignment or creature type, can send curses back to their originators and blend quarry with the inflicting of negative levels – a true beauty of a deadly adversary!

Editing and formatting are very good, I noticed no grievous glitches. Layout adheres to Legendary Games two-column full color standard. The original pieces of full color art provided are high-quality and awesome. The pdf comes fully bookmarked for your convenience.

Jason Nelson, Mike Welham, Alex Riggs and Jen Page have crafted an overall awesome collection of mythic adversaries. While the supplemental material this time is not as awesome as in some installments and while I wasn’t blown away by all critters, there are ample herein that truly rank among the best in the whole series – the androsphinxes and their riddle mechanics, for one, are absolutely brilliant and creatures like the cursed king and the ahkhat or ammut alone justify getting this one. When it shines, it shines very, very brightly – hence, in spite of some minor flaws, I still feel justified in rating this 4.5 stars, rounded up to 5, with the genius of some creatures herein being responsible for the seal of approval the book would have otherwise lost.

You can get these awesome critters here on OBS and here on d20pfsrd.com’s shop!