Sailing Aboard the Widow (PF2) 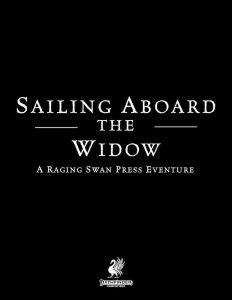 The pdf provides pretty detailed information about the crew and NPC passengers (6 NPCs in total, with information on background, personality, secrets and read-aloud text for them); said NPCs do list race, alignment and classes/class-combination, but do not come with stats. Particularly for PF2, referencing the default roster or giving some brief adventure-relevant abbreviated stats might have been prudent.

Anyways, another important thing to note would be the system-integration: Raging Swan Press publishes their content for 4 systems as per the writing of this review, and that sometimes hurts the execution for a given system. The PF2-version does have me more torn than the other versions; while it manages to properly contextualize e.g. locked chests and the like, the module doesn’t offer the degrees of success/failure benefits associated with PF2, and I couldn’t help but notice that this version is slightly less beefy when it comes to crunchy bits than the version for the first edition of PFRPG. I would have liked to see a sidebar dealing with auras and troubleshooting “detective-magic.” More so, I do think that PF2’s systems lead themselves actually to representing the concept of the module VERY well AND explain how its mystery works, but the module doesn’t make full use of the system’s potential.

PF2 is a system designed to allow the GM and designer to tell amazing stories, and, somewhat to my chagrin, authors and game designers right now seem to still not be as confident in leaning into the system’s strengths as they should be. When I look at PF2 and this module, I see a match made in heaven, but the execution provided is functional, yes, but also a shot short of what this could have been: Going just by the system and its possibilities, this should have been the best of the 4 versions. It’s not. It’s still a very good, atmospheric sidetrek, a well-executed adventure, but it falls slightly short of the excellence it could have attained. Hence, my final verdict will be 4.5 stars, rounded up due to in dubio pro reo.

If you enjoyed this review, please consider leaving a tip via paypal, or joining my patreon. Thanks!