Sailing Aboard the Widow (OSR) 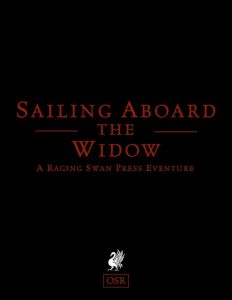 The pdf provides pretty detailed information about the crew and NPC passengers (6 NPCs in total, with information on background, personality, secrets and read-aloud text for them); said NPCs do list race, alignment and classes/class-combination, but do not come with stats. The OSR-version tends to use proper old-school class references like “thief”, but for the purists, it should be noted that the supplement does use “wizard” instead of “magc-user”; not a bad thing, mind you, but some of my readers want to know that.

Anyways, another important thing to note would be the system-integration: Raging Swan Press publishes their content for 4 systems as per the writing of this review, and that sometimes hurts the execution for a given system. The OSR-version was probably the easiest to pull off of the 4; in contrast to the other systems, we have less of an issue with “detective magic” here, and the supplement tends to use roll under mechanics where required.

Philosophy-wise, we tend to award roleplaying instead of checks, which fits with system-aesthetics.

Now, usually, I’d penalize the module for the lack of player-friendly maps…but it genuinely doesn’t deserve it. For OSR-games, this module might seem a little bit less novel, as more modules system-immanently focus on trying experimental things. Now, *personally*, I prefer it when an OSR-supplement commits to an actual rules-set. Why? Because the power-levels of, say, B/X (or OSE), LotFP and, say AD&D 2e (For Gold & Glory) diverge rather significantly, and having a concrete system with concrete mechanics helps me to contextualize a game in the rules-set I end up using, but this is a general note and will not influence my final verdict. I maintain that this retains an excellent bang-for-buck ratio, which makes up for the lack of player-friendly maps, and as such, this deserves a final verdict of 5 stars.

You can get this inexpensive eventure here on OBS!

If you enjoyed my review, please consider leaving a donation via paypal, or joining my patreon. Thank you.