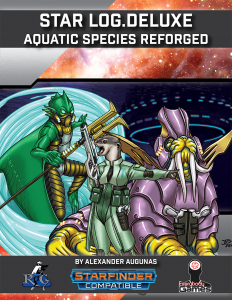 This installment of the sub-series of the Star.Log-series dealing with more modular playable races clocks in at 13 pages, 1 page front cover, 1 page editorial, 1 page introduction, 2 pages of SRD, leaving us with 8 pages of content, so let’s take a look!

In case you’re new to these pdfs: The series essentially focuses on rewriting a whole host of playable species in a manner that emphasizes player agenda and lets you customize the experience to a higher degree than usual. This design paradigm is very much indebted to how Pathfinder’s 2nd edition deals with species/ancestries, and is also a design-paradigm that I could see in Everybody Games’ upcoming and highly anticipated RPG Eversaga. (Seriously, Eversaga is right now my most anticipated game!)

To recap the system: Write down all 6 ability scores and put 10 next to them. You get an ability boost, which you assign and can’t reassign without a mnemonic editor or the like and add 2 points to the ability score for the boost. You can also choose a flaw, which means you need to subtract 2 ability points from a chosen ability—if you do that, you get another boost, and you may not apply a boost and a flaw to the same ability score.

A species’ vital traits entry lists the ability scores you can boost, but flaws remain yours to freely choose, at least usually. Then, you apply the theme’s ability score increase, and after that, you get 10 point to customize your character on a 1-for-1 basis. You can spend these however you want, but at the game’s start, ability scores cap at 18. Points must be spent and can’t be saved for later.

Simple, right? So, how does the engine proceed to work? Well, each species gets its vital statistics, which note the eligible scores for ability score boosts (and flaws, if relevant), the Hit Points, sizes, speed, sense traits (designated with the word “sense”), inherent abilities (designated as “inherent”), heritages (which may be specific or universal), and the character chooses two species traits, chosen from the character’s species or the “universal” list. The character gets an additional species trait at 5th level and every 4 levels thereafter. Minor nitpick: The “universal” list is not actually in this pdf, but the explanation of the engine does refer to it with  “see page $$”-references; while this is not a deal-breaker, considering that the engine actually gets better the more of these pdfs you have, it still was worth mentioning to me. As a whole, I do recommend getting the entire product-line if you want to run with the species reforged anyways.

Worth mentioning: This pdf does uses two terms I enjoyed seeing: Recuperate refers to spending a  Resolve Point in a 10-minute rest to regain Stamina; daily preparations is the term employed referencing when 24 hours and an 8 hour rest have passed. This makes the rules language MUCH more elegant than usual. Two thumbs up.

The first species herein would be the brenneri (Alien Archive 3, I think), who get their boost to Dexterity, Constitution, Wisdom or Charisma, and can get a second boost to any of these by accepting a flaw; they have 4 HP, 30 ft. speed, 20 ft. swimming speed, darkvision 60 ft., 4 HP and hold breath…oh, and if you don’t have AA3, they are humanoid otters! (*insert around 10.000 South Park allusions*) There are 3 heritages to choose from: Lakedweller brenneri get two additional class skills, one of which must be Diplomacy or Sense Motive; Riverfliters increase their HP by 2 and get an additional Stamina at 1st level and every level thereafter. Seaborn brenneri, finally, increase swim speed to 30 ft. and also increases their hold breath capability further. The traits provided include using Acrobatics (if trained) instead of Athletics for swimming, +2 racial bonus to Diplomacy and Sense Motive, blindsense (vibrations) 30 ft., +1 skill rank at 1st level and every level thereafter, and there is one trait that lets you designate a favored object; when recuperating with it, you once per day also recover ½ character level Hit Points.

Gentle combatant nets Improved Combat Maneuver (grapple) or Improved Unarmed Strike; linguist’s magic nets at-will message or 3/day share language. Mimicry of sound via Bluff is really cool, and there is a trait that nets you +1 racial bonus to saves vs. emotion effects, and by spending a Resolve Point as a reaction when failing such a save, you can retry next round, potentially shaking off the effect. Can be used once per recuperate interval.

The second species would be kalos (AA1), who are kinda like aquatic, humanoid bats (or rays), with boost to Dexterity, Intelligence or Wisdom, and an additional one for a flaw to Constitution. kalo get 2 Hit Points and have a speed of 20 ft. and a swim speed of 50 ft. They are also aquatic monstrous humanoids and get blindsense (sound) and low-light vision. I assume the range of blindsense to be the customary 60 ft., but the pdf doesn’t explicitly state this, which does somewhat compromise functionality. On the plus-side, the trait does explain both of these sensory abilities, which means you won’t have t flip books. Nice. Kalo get to choose from two heritages: Deepborn kalo get an additional kalo trait, and floeborn kalo can hold their breath for 10 minutes. This is important, since kalo are aquatic and not amphibious, and as such, need to hold their breath when on land.

Alternatively, the trait nets you Weapon Focus applying to all aquatic weapons. Here, the phrasing is weird once more: “If you already have Weapon Focus, you gain Versatile Weapon Focus instead.” But…usually one can’t have Weapon Focus in all weapons with a special property? Is this trait supposed to be available multiple times for the taking? This genuinely confused me. Cryo Weapon Familiarity nets proficiency with basic melee, advanced melee, small arms and longarms in the cryo weapon group. (Same syntax thing applies here.) 3rd level nets specialization. The Weapon Focus consideration applies here as well.

…and there is something really weird. The trait is listed twice, as the 4th and as the last trait. :/

The other traits include character level cold resistance, +1 circumstance bonus to atk when moving at least 5 ft. and assaulting a creature in zero-g. flight or in water who doesn’t have a swim or fly speed. Stealthy swimmer nets a +4 unytped bonus when using Stealth in water; pretty sure that should be a racial bonus. One trait nets you a class skill and a free rank for the skill every level. Jet charge provides ferocious charge under water and lets you trip in place of an attack when charging, sans the usual penalties. If you already have a similar ability, you can now charge thus through difficult terrain. Athletic swimmer nets Athletics as class skill, and lets you take 10 in the skill, and if you already can do so, you instead can take 20 to swim as a full action, making 5 ft. progress.

Morlamaw (introduced in AA3, unless I’m mistaken) get their boost to Strength, Constitution or Charisma, and a second boost to them for a flaw in Dexterity or Wisdom; 4 HP, Large monstrous humanoids, they have a 20 ft. speed, swim speed 30 ft., and are amphibious and get 60 ft. darkvision. The Morlamaw are…walrus people! Awesome! Less awesome: We only get one paltry single heritage, no choice. :/ The one heritage, the frigid morlamaw, treats environmental cold as one step less severe and get an untyped (should probably be racial) +4 bonus to Fort saves vs. cold, but also a -4 penalty on saves vs. heat, and they gain cold resistance as a bonus trait, which nets character level cold resistance.

The traits include +1 skill rank per level, blindsense (scent) 20 ft., which changes to blindsense (vibration) 40 ft. in water. We also get Stealth as a class skill (and +2 racial bonus to Stealth if you have it already instead); submerged in water, the morlamaw counts as having cover under water when using Stealth to hide from blindsense (vibration)—cool! The species can also get ferocious charge. Another trait nets a circumstance or morale bonus to AC, atk, saves or skill checks, they also get a +1 insight bonus to it. By contracting and expanding their blood vessels, some morlamaw can, as a standard action, fascinate targets within 60 ft., with the save governed by Constitution and if you beat the save, you’re immune until the morlamaw recuperates. Yes. PSYCHEDELIC WALRUS PEOPLE. SIGN ME ON!! 😀 I LOVE this!!

Mystic heritage nets Mysticism as a class skill and Connection Inkling; if you’re a mystic, you instead get Spell penetration. Natural weapons, unsurprisingly, is also included. (As an aside: Some Everybody Games pdfs do classify the natural weapon damage type; this doesn’t. Not a bash against the pdf, but something to note. Personally, I enjoy the damage being properly typed.) Finally, rapid swimmer lets them upgrade their swim speed to 40 ft.

Editing and formatting are good on a formal and rules-language level…but not as meticulously precise as I’ve come to expect from Alexander Augunas. Layout adheres to the series’ two-column full-color standard, and the pdf sports neat full-color artworks for the species. The pdf comes with basic bookmarks; one per race would have been nice.

Alexander Augunas’ aquatic species leave me torn; in contrast to other species reforged pdfs, this one shows signs of a rough (or sped up) genesis; from the doubled kalo trait to minor hiccups, this feels like it suffered a bit in production. The morlamaw are awesome, but where is the heritage that gets hollow tusks and sonic abilities? Come on, siren morlamaw! (Yes, I genuinely think that’s a cool idea; they can already kinda strobe, so the whole musician/raver/stoner doom angle seems something worth pursuing…) Only getting one heritage for them was a bit of a downer.

That being said, do I love the 3 species? Yes. Do I think that they are superior in their reforged iteration? Yes. In fact, this would be an easy 5 stars + seal of approval once it gets rid of its hiccups, but as written, I should probably rate this 3.5 stars and round down…but I can’t bring myself to doing that, because the ideas? They are pretty cool. The psychedelic walrus people alone? Pure awesome. It’s based on the strength of the ideas that I justify rounding up from 3.5 stars, in spite of the rough patches.

The SFRPG-core species can be found here!

The Vesk Empire species are here!

The Blood Space species are here!

…and last, but not least, the legacy species (elves, dwarves, etc.) are here!

You can directly support the creation of Eversaga RPG here on patreon!

If you found my review to be helpful, please consider leaving a tip via paypal, or joining my patreon. Thank you!