Quests of Doom: The Covered Bridge 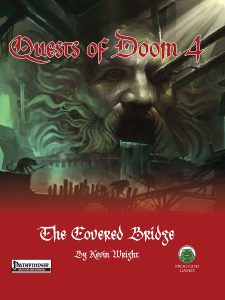 This module in the Quests of Doom-series clocks in at 30 pages, 1 page front cover, 1 page editorial, 1 page advertisement, 1 page ToC, 1 page SRD, 1 page back cover, leaving us with 24 pages of content, so let’s take a look!

This module is intended for 4-6 characters of levels 4th to 6th, and is set in the Lost Lands campaign setting, though adaption to other settings is pretty simple. The module features read-aloud text for encounters and areas, and a total of 4 fantastic b/w maps by Alyssa Faden, who is one of the best cartographers out there. The maps are stunning; while one doesn’t note a scale, the maps do something cool one doesn’t see too often and use different shading for different ceiling heights. The maps are stunning, impressive…and guess what we don’t get? You guessed it, alas: No player-friendly versions of the maps. Particularly considering how absolutely stunning the maps are, it hurts me within the dark recesses of my soul to see that.

Genre-wise, this module is a mystery/investigation with some strong old-school gothic leanings; the module is essentially a kind of passion-play mansion crawl, though, obviously, fantasy elements do exist. The tone suits the Lost Lands rather well.

All right, only GMS around? Great! Sir Varral et-Casan was a fabled hero once; called by Thyr to a life of service, and in the process of his heroics, gathered loyal companions like Demoiselle Arbasa, the exiled Joln, a large raccoon pet called Dari. Two of these NPCs are statted, and both are not impressive from a build-level; they are functional, but…yeah. The statblocks also have some glitches in the math, something that extends to the remainder of the module.

How is this relevant? Well, as the adventurers cross the eponymous covered bridge, they read an inscription “In whose hand did the poison lie?” carved into the floor planks; reading it turns day to night, and the party stumbles into a battlefield against The Lord of Crows and its minions; this is essentially a sequence of combats. The combats are solid, if a bit unremarkable; it’s a test of endurance, if anything, and I wished it set up the cool boss a bit better. It is here that the party meets Sir Varral, and is invited to the Manse Loga, the mansion where the majority of the module takes place. The module presents the staff and dramatis personae, and also presents essentially an event-driven encounter array, with dressing needs outsourced to the Tome of Adventure Design, though I’ve found that the maps do help there (if only there were player-friendly versions); after dinner and some initial encounters and a murder committed by one of the guests, the adventurers have to venture to the menagerie, where, provided they survive the monsters there, they’ll find the murderer to be mad.

In the mansion, the weird occurrences intensify, and ultimately are identified as the consequences of a particularly potent cloaker and a nightmare node…and then, the inevitable murder of Sir Varral happens, as it always has. The whole reality is a weird interaction with the dream world, so if the party does murder-hobo suspects, they’ll just return; the goal is not t prevent the murder, but to find out how it happened! Once Sir Varral dies, the party will be back on the bridge – and will have to present their findings to the paladin’s now-undead specter to identify the true culprits…and the situation is complex.

The man driven mad did poison the paladin, but so did all of his compatriots (courtesy of the telepathic whisperings of the true culprit)…and the raccoon is actually the demonic instigator. Yeah, the latter is a bit too close to one of the twists of a certain mega-adventure set in the Lost Lands that I adore. Still, this “Agatha Christie with Undead”-style whodunnit in the end was really enjoyable to me.

So, all well? Unfortunately, not really. While the poisons employed are sufficiently deadly to make it plausible that the paladin died to them, in spite of a good Fort-save, the module cheats in the most aggravating manner: I do not object to the vials of poison reappearing/thwarting attempts of PCs to prevent the murder; it has already happened, after all. And here, the dream-logic effect makes sense. But know what’s really, really weaksauce? The module just DM-fiats investigation spells away. Detect magic, detect evil? Poof, suddenly don’t work anymore. This is capital letters BAD DESIGN, taking player-tools away as one desires. The party should at least have some means to use them; one does not work against player capabilities, one works with them. This becomes even dumber if you realize that Sir Varral’s downfall must have meant that he and his allies are really, really dumb. Why? Well, the non-functioning PC-capabilities can at least be explained away by the weird nightmare-curse thing going on. Badly, granted, and it’s really BAD DESIGN, but it does at least make a tiny degree of in-game sense.

The quasit-masquerading-as-raccoon, though? It has no ability to actually evade…*drumroll* detect evil. I am not kidding you. The signature at-will SP of a paladin, and the module literally tells us that the critter has been observing the paladin for more than A YEAR without triggering that. Is that possible? Theoretically. Is it plausible? Heck, the f*** no! Which paladin would be so damn incompetent when he realizes that the raccoon is tougher than usual, something the GM’s btw. supposed to play up according to the module! W-T-F? How did this get past any inspection? And no, the good Sir does not have Int and Wis as sub-8-dumpstats; Int 11 and Wis 17. Yeah…well…NO. This makes no frickin’ sense in-game. I guarantee you that this is not something esoteric—it will be the first thing that players comment on once the true nature of the demon is revealed “How in the infinite planes of the Abyss did he not notice that??”

Editing and formatting are okay on a formal level; on a rules-language level, this module doesn’t fare well, but it’s serviceable. Layout adheres to Frog God Games’ classic two-column b/w-standard, and features nice b/w-artworks. The cartography by Alyssa Faden is fantastic and detailed in just the right ways; the absence of player-friendly maps hurt me all the more. The pdf comes fully bookmarked for your convenience.

Kevin Wright’s “The Covered Bridge” (conversion by Dave Landry) is a great example for a 5-star module that stumbles, very hard. The set-up is interesting, and the investigation actually challenging. The atmosphere evoked is grim, foreboding and right up my alley. And the set-up gets everything, structurally ALMOST right. Now, granted, the GM/author-fiat to strip PCs of stuff they should be able to do? That’s the laziest way to handle this, and the least fun one. Why not work with the spells? Have them react with the unique set-up in ways that provide information that is not necessarily useful? It wouldn’t have cost more words, but made the module better. A similar issue applies regarding the in-game logic bug of the BBEG. One is subpar design, one is an error in setting-internal continuity, and both severely tarnish this module. BUT.

But both can be fixed by an experienced GM. And I genuinely think that this module is worth doing that for. There is fun to be had here.

As a reviewer, the module’s flaws do accumulate, though: Some rules-glitches, player maps missing, then add the two structural problems…and I can’t rate this higher than 3.5 stars, rounded down. This might well be the best Quest of Doom-module I’ve read in the series so far; it almost reaches the awesomeness it deserves to attain, so if you’re in the mood for some mystery and don’t shirk away from the two issues mentioned, please consider taking a look. The module deserved better, yes, but at least it can be salvaged with relative ease. And it deserves being fixed.

I only have the PFRPG-version. The 5e-version has the same issue, though: Paladins get Divine Sense at level 1. In S&W, the detection only begins at 8th level, so I assume that the module was originally penned for that system, and might be better in it.

You can find the OSR (S&W) version here on OBS!

If you found this review useful, please consider leaving a tip via paypal, or joining my patreon here. Thank you!