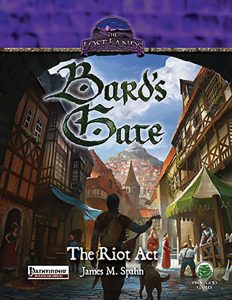 The second module as an expansion to the massive (and excellent) Bard’s Gate city supplement clocks in at 18 pages, 1 page front cover, 1 page editorial, 1 page ToC, 1 page SRD, 1 page back cover, leaving us with 13 pages of content, so let’s take a look!

The Riot Act is a module set in Bard’s Gate (and yes, you should have that book to run it, unless you’re willing to make some serious modification), situated in The Lost Lands, for 4 characters of 2nd level. The module mentions that a rogue or bard is helpful, and I’d concur – skills will be useful. More than that, you’ll need means to dish out SERIOUS amounts of damage and high Will saves – scratch that, the boss is simply unfair if played even halfway decent by the GM, but I’ll get to that below.

The module features no player-friendly maps, and two of the maps are missing a scale, one of them even a grid. One of the potential combat encounters could have used a map, but has none. For overview, having a map of Bard’s Gate is extremely useful, but that doesn’t provide these location maps either. The maps present in the module do not come with player-friendly iterations.

The module does have a handout, which is per se a cool thing – unfortunately, it is the most stupid kind of handout in which the antagonists have WRITTEN DOWN their evil masterplan on PAPER, including gloating. This was a real immersion-breaker for me, and one of the few instances, where I genuinely think that the module would have been better off without a handout – and a better plot instead.

But I am getting ahead of myself. The module also contains 3 magic items – one nets unlimited daily magic missiles, but if used more than once per day, one strikes the user. It also fails to mention an activation action – I assume spell completion. There is an item for nary more than 1K gold that lacks an activation action, but ends ANY musical effect automatically – yes, even that of a level 20 bard. And worse, those affected can’t use the like for an hour afterwards. In a world where this item exists, any music-based characters and abilities are useless. This is badly-designed and broken. The final item ties in with the boss.

The module does offer random encounters and read-aloud text. Okay, so structurally, this is a railroad, but unfortunately not one of the good ones – and yes, there are plenty of awesome railroad adventures.

So, a lady called Asmarisa has purchased a large building of the Bridge district, opening her theater, the Motley; her first play, “The Maiden’s Kiss”, has become a super smash-hit – to a strange degree, and thus, the lyreguard investigated, but turned up with no evidence, and in fact, very happy with the play. The adventure kicks off as the PCs are walking through the Bridge district and become embroiled in a riot – after the much-sought-after tickets for the next show. The rioters use the stats from bard’s Gate, and can attain tickets either via force or Diplomacy and subterfuge.

Unfortunately, this is where the module starts to fall apart in a variety of ways. The PCs attend the performance, and halfway down the read-aloud text, said text tells the PCs what to do, namely joining in thunderous applause. Read-aloud text should NEVER hijack control from a PC – particularly since, well, it’s not guaranteed. No surprise: The play is enchanted, PCs must make Will-saves while attending, but the read-aloud text forces them to applaud either way. Oh, and the play affects the PCs with a “powerful, but undetectable mass charm.” It’s also “latent.”

SERIOUSLY??? You mean…like, it’s a whisper in the ear? Like, I don’t know…a frickin’ suggestion?

Also, regarding this whole set-up?

NOT HOW PFRPG WORKS.

Anyhow, the PCs navigate past the stage crew and into a passage beneath the Motley. In the passage, there are two adjacent rooms: One contains 12 rage zombies, one contains guards whose music pacifies the zombies. Why? How? Things become even better. At one point, there’s a magically-sealed lock that requires a tune – said tune is played by the guards, and it’s on a sheet of music…that is never mentioned before, in the section of the guards. Also weird: The door’s XP-reward for bypassing it with the proper “puzzle” if you can call it that, is less than the CR of the trap.

The PCs emerge after this section on a shoreline just a few feet from the Stoneheart River, where the evil entourage has their camp. (Why didn’t the lyreguard notice them?) The troupe is pretty numerous (22 rank-and-file goons, +1 CR 2 dude and a quasit), so you better hope that you have a character with maxed out Stealth who is also lucky. There are also some minor problems – like, what’s the save you use to avoid flames spreading? Well, the module seems to think that “Fortitude” is correct – which it isn’t, and also fails to type the damage as fire, but that, at least, is a nitpick. This is also the part when the PCs ostensibly either hear a NPC extolling their moustache-twirling plan and evil intentions, or find a written account that is no less dumb.

It gets better. When/if the PCs retreat, the final section will be a rooftop chase of the lady, while the city breaks out in riots. This mini-chase may per se be decent, but the boss Asmirasa? Well, she has wasted a feat on Weapon Finesse, but wields a weapon that can’t be finesse’d (smart) – and clocks in at CR 7. Yep, 7. You see, she was turned into a succubus by an evil item, the ring of demonic deception. Why is this bad news? Well, for one, she has charm person, at will. The DC? 22. At 2nd level. Remember, she also has a fly speed that lets her reliably stay out of reach of any PCs, AC 20 and 84 HP. She also has energy drain, which, when used even halfway smart, will guarantee an unfair, unrewarding type of TPK.

But that’s not where it ends, oh no. Her item, the ring of demonic deception, eliminates an outsider’s ability to cast spells or use SPs of third level or higher, eliminates DR and halves SR. But guess what? ANY magic to detect them and discern them fails and nets only a ping as a frickin’ commoner. This is NOT an artifact, and it can RAW be REMOVED AT WILL. Mortals also can turn into succubi/incubi, but who cares – the ring could be mass-produced by the forces of the abyss, and generate a perfect infiltration force of outsiders. Never mind that there are plenty of precisely codified spells and effects that do all of that (at higher levels), and that have appropriate safeguards. Oh, it gets better. The ring’s worth 90 K. At 2nd level – WBL adieu. “But they can’t sell an evil item?” Perhaps not, but there are plenty of options for PCs to convert magic item values into other benefits, devour it, etc. pp. Provided the PCs mind that selling evil stuff is a bad idea in the first place, that is…

Editing and formatting are formally good, if not particularly good regarding rules. Layout adheres to a no-frills two-column b/w-standard with neat to okay artworks, some of which fans of Frog God Games will recognize. The pdf comes fully bookmarked for your convenience. Cartography is not as good as usual for Frog God Games, and is missing player-friendly maps as well.

This is the worst module by James M. Spahn I’ve read; both he and the authors that contributed additional material, Jeff Harkness and Skeeter Green, are usually indicators for something I’ll at the very least like.

This was not the case here. I don’t object to difficulty, never have – I’m a killer GM, and I like old-school modules. I think adventures should be hard, because, you know, if there’s no chance of failure, why bother playing? I also don’t object to railroads – heck, I’ve 5-star#d plenty of them over the years.

I do, however, object to the extremely sloppy rules that this module presents – because they destroy the central premise of the mystery to uncover, and because they, due to being so sloppy, undermine very valid strategies for the PCs. I object to read-aloud text forcing actions upon players – not feelings, atmosphere, a glance or the like – full-blown “this is what you do.”

I object to the module undermining the plausibility of the Lost lands setting, which generally is pretty darn good at catching such issues.

And I object to the fact that the villains are moustache-twirling stupid-evil.

This reads like a failed, phoned-in Pathfinder Society pitch, with Bard’s Gate slapped on.

…you know, when I have to bash a module by Frog God Games (doesn’t happen too often), it’s usually due to mechanics, or something going wrong in conversion. But even then, there’s usually something I can get out an adventure. Awakenings, for example, may not be mechanically-good in PFRPG, but oh boy, story? Totally worth going through the hassle of fixing it.

I actually went through my massive Necromancer Games/Frog God Games-collection, and know what? I think this is the worst module by them I own. It’s their first module in years that I genuinely wouldn’t put on my shelf.

I can’t recommend this module to anyone. Get any other Frog God games modules; for example the excellent Rogues in Remballo. But steer clear of this bland, unfair, uninspired mess. 1.5 stars, rounded down.

You can get this module here. But you really shouldn’t.

Instead, get Bard’s Gate.

This mess is also available for 5e.

And for OSR (Swords & Wizardry) here.

I don’t have those versions, though.

If this review was helpful for you, please consider leaving a donation, or joining my patreon here. Thank you!