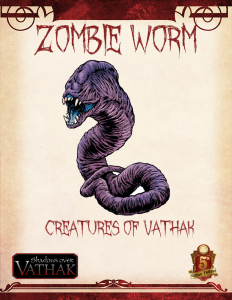 The zombie worm is a challenge 1 critter, an it is defined by its bite, which grapples creatures hit, regardless of size; the DC to rip off the zombie worm is weird (should be 1 higher or 1 lower), and the interesting thing here is that the attached zombie worm gets the host’s resistances and immunities – and any damage applied to the worm is also applied to the host. To add insult to injury, the worm, if killed, detonates in a low-range burst of necrotic energy. The worm can’t attach itself to elementals, constructs or undead, and living creatures that have the worm attached to them can’t gain the benefits of rests, food or sleep. At 35 hit points, the worms are tough as nails, particularly for a challenge 1 critter…and that’s with the incorrect HD: Either their size should be Tiny (likely), or they should have d6 HD.

…I don’t think this critter does a good job at what it tries to do. It tries to be a bad news type of parasite, but none of the strategies to dispatch it are actually rewarded. Take it off? Extra damage! Attack it or kill it? Extra damage. This makes the critter functionally an endurance test for hit points between worm and host. And that’s not necessarily fun. This critter needed some actual strategy to get it to relent, to reward smart roleplaying.

Editing and formatting are good on a formal level, but on a rules language level, the italics are missing from all features and the attack sequence. There are hiccups in the math.

Layout adheres to a two-column full-color standard, and the critter-artwork by Rick Hershey is solid. The pdf has no bookmarks, but needs none at this length.

Ismael Alvarez usually is good at making 5e-critters, but this one? It feels rushed. It’s neither clever, nor does it have a strong theme. If anything, the critter is sadistic in a “GM/Designer tries to screw the party” kind of way. I don’t think this critter is compelling, or well-designed, for that matter. My final verdict can’t exceed 2 stars, and that only due to the generally solid rules-language and low price. I’d suggest getting any of the other Vathak critters over this one.

You can get this critter here on OBS.

If you found this review to be useful, please consider leaving a tip, or joining my patreon.