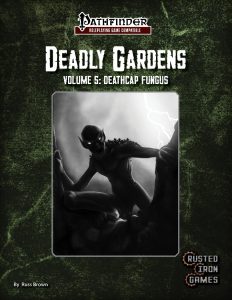 This installment of the Deadly Gardens-series clocks in at 7 pages, 1 page front cover, 1/2 a page SRD/editorial, leaving us with 5 1/2 pages of content, so let’s take a look!

We begin this installment with 2 hazards, the first of which would be a lesser form of cave-in, with the second being a patch of the eponymous deathcap mushrooms, which may generate bursts of negative energy – thankfully, in a limited manner, so healing abuse by undead is not possible. We also receive a new alchemical item, the salt bomb, which deals AoE damage to targets. EDIT: Now the bomb is typed, damage-wise. The salt spread by the bomb does inflict more damage for subsequent rounds to targets susceptible to salt, with the subsequent rounds, weirdly, causing “salt damage” – I think that’s supposed to be acid.

Now, the pdf does feature 3 sample creature modified with the new template of deathcap creature: Crypt thing, ghoul and zombie (CR 6, 4 and 1). The template adds +1 to the CR, nets a bit of positive energy resistance, adds a bit of negative energy damage and death throes. Each gets its own artwork, though the artworks do not adhere to a uniform style and the ghoul’s artwork, as featured on the cover, is the superior one.

The pdf also features a total of 10 different natural items, which are in and of themselves mostly not related to the deathcap fungus – we get notes for black pudding acid, darkmantle eggs or gelatinous slime bladders. Now it should be noted that, if you’re not familiar with these, that unless otherwise noted, activating these is a standard action that provokes AoOs – so yeah, the hyperlinked free pdf for these, if you don’t already have it, may be worth checking out. That being said, not all are perfect: Take Powdered ID Ooze: It hits foes attempting to telepathically contact you with confusion for 1 round.

Editing and formatting are improved in the revised edition. Layout adheres to a pretty printer-friendly two-column full-color standard with solid b/w-artworks. The pdf comes fully bookmarked for your convenience, in spite of its brevity. Nice!

Russ Brown’s Deathcap fungi aren’t bad by any means, but neither are they particularly impressive. They represent a plant-based upgrade for undead that is pretty basic. More damage, better defense, death throes, that’s pretty much it. That’s not bad, mind you, but it’s not impressive either. The supplemental material is better now, but can’t really make up for the template being pretty cookie-cutter. This is by no means a bad pdf, but at the same time, it falls short of the standard of the series. The low price does help to remedy it as far as I’m concerned, and the improvements made net this +0.5 stars, but I still can’t round up for it.