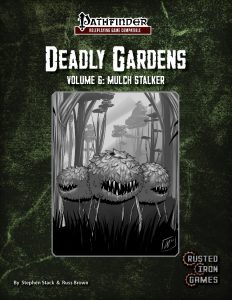 This installment of the Deadly Gardens-series clocks in at 5 pages, 1 page front cover, 1/2 a page SRD/editorial, leaving us with 3.5 pages of content, so let’s take a look!

The pdf begins with two magic items made from natural items – the first of these being the manticore tail flail, which is amazing and can fire a limited array of spikes each day. The second one would be a frog’s eye ioun stone, which helps avoid being surprised.

The critter herein, the mulch stalker, would btw. clock in at CR 3 – these critters consist of broad, overlapping leaves, with segmented, taloned branches jutting forth. Mulch Stalkers are small, but VERY fast – 50 ft, and may climb and leaf glide – they are, in short, very deadly in that regard. they have bites and talons. Speaking of which: These cause a form of rot that does not heal naturally. Ouch. Oh, and they can full attack when using a gliding charge. And they sneak attack. Oh yes, really nasty and cool critter…and they have Pack Attack! Yep, they are awesome and pretty much represent what I expect from the series, creativity/coolness-wise!

As always, we close the pdf with several natural items – including rust monster antennae, mulch rot powder or a medusa’s head – which may also petrify the careless wielder or those around him. Similarly, size-reducing intellect devourer jelly is neat and now features significantly improved formatting and rules lingo. Hydra blood has increased its base price and nets fast healing 5 for 1d4 + 4 rounds, making it balance-wise more viable – not too bad and harvesting requires dead creatures, but still – one could argue that drawing blood could make an industry of the stuff. I’s strongly suggest making them heart’s blood or something like that/ the flavor more explicit. But then again, that is fluff-based.

Editing and formatting are very good in the revised iteration. Layout adheres to a nice two-column full-color standard and the b/w-artwork provided is amazing. The pdf also comes fully bookmarked, which is nice.

Stephen Stack and Russ Brown deliver an amazing critter and in the revised version, the fixed hiccups increase the value of this further – to the point, where I can rate it 5 stars + seal of approval. For the low price, this is a steal indeed!

You can get this cool critter here on OBS!
Endzeitgeist out.